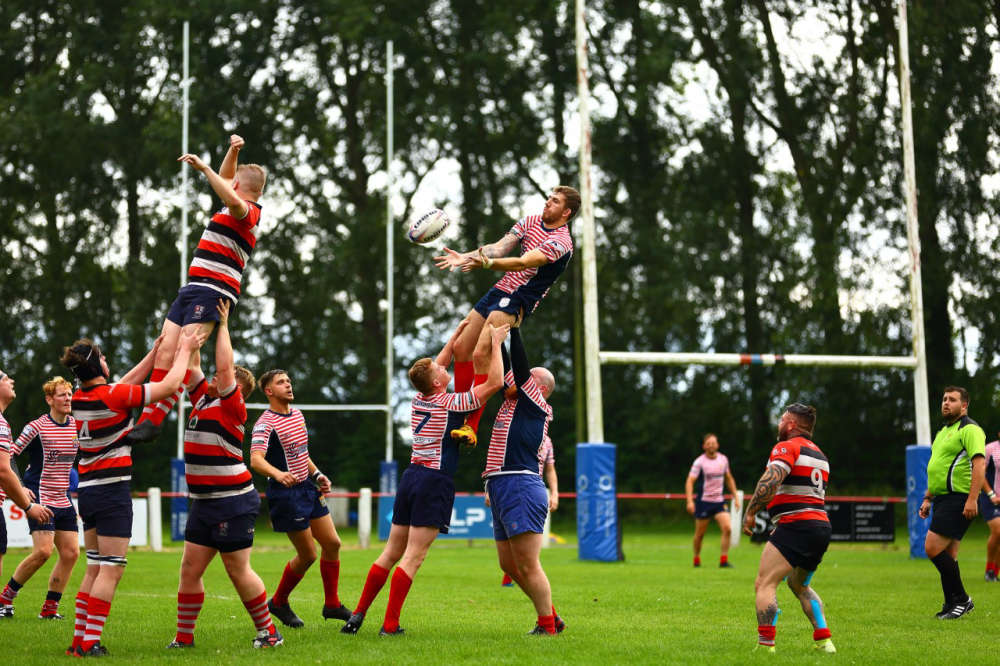 A game Oldham had every chance of winning but too many unforced errors meant Liverpool St Helens (LSH) had probably 65% of possession and therefore control of the game.

It started well for Oldham, although on a defensive front, with some great tackles from Tom Hannon and Martin Meggison. LSH drove well into the Oldham 22 but Jordan McEwan snatched possession and kicked to find touch on half way.

LSH kicked deep into the Oldham half and Lewis Townsend took the ball back at pace, found Meggison on his outside who broke through several tackles. Unfortunately the ball was knocked forward from the resulting ruck. This was the start of the numerous errors that would befall Oldham throughout the game. The Oldham scrum pushed LSH back and they resorted to kicking deep again with McEwan again finding a good touch. LSH, who were dominant in the lineouts drove the ball into the Oldham 22 but were penalised for not releasing the ball. Tom Davies found a great touch on the LSH. From the line out LSH were again penalised for offside and Davies found touch on the LSH 15 metre line. The ball was taken in the line by Captain Jack Taylor. The pack set up a great drive and John Souter touched down near the corner. McEwan hit the post from wide out. Oldham taking the lead at 0-5 after 15 minutes.

LSH quickly hit back from the KO. Some slack play in retrieving a kick to touch allowed LSH a lineout in the Oldham 22. Several drives to the Oldham line before Matty Johnson outpaced the Oldham defence to score wide out. Matt Wood failed with the conversion. 5-5 after 25 minutes.

Oldham couldn’t keep possession. They lost the ball on numerous occasions by trying to offload when taking the ball into tackles. When they did do the right thing they invariably gave away penalties for holding on to the ball on the ground. This allowed LSH to put pressure on Oldham. They made a great break down the left but Owen Hewson was up to the task and tackled his opposite number into touch. It looked good when Oldham took the lineout and Davies was about to put Josh Watson through a gap when he was hit by a tremendous tackle by Matt Wood, the ball went loose with all the Oldham players moving forward. He picked up and raced under the posts from hallway. He converted his own try to make the score 12-5 on 30 minutes

Both sides were testing each other with long kicks but just as it looked like Oldham would get the benefit of a deep kick into the LSH 22 the referee, to the surprise of the spectators, blew his whistle for half time. This was a good 4 minutes early and that was not taking into account stoppages. We have waited a long time to get back to rugby so we don’t want to be short changed!!

Shortly after KO LSH were awarded another penalty for Oldham holding down in the tackle, yet again. Wood stepped up to add the extra 3 points. 15-5 aft 45 minutes

When the LSH prop was given a yellow card for dangerous play at a ruck it looked like Oldham would get the upper hand. This was not to be the case and in the ten minutes they were unable to trouble the LSH line despite some strong runs from Stuart Brennan and Nick Hackman.

They fared better however on his return and for the last 15 minutes of the game and the introduction of Rob Froggatt, who drove the ball in strongly, they had several chances to score. Townsend and Simon Gardener came close down the left before being bundled into touch. Ryan Pickles, with a great break down the left from halfway, to the LSH 22 were Oldham were awarded a penalty. They kicked for touch and from the resulting lineout Ryan North drove over the LSH line with the support of the whole pack, but the score was not given. A 5 meter scrum was awarded and Oldham pushed the LSH back but were unable to control the ball at the back of the scrum when all it needed was to be touched down. LSH took possession and only some good defence stopped them from scoring. Oldham had several other chances but careless play and unforced errors left them ruing what could have been. Yet again the ref must have a fast watch – the half petered out with 3 minutes still to play and with even more stoppages in this half!!

Oldham had the better in the set piece scrums. With the front row holding up well. All the replacements got a little game time with Nick Wright, Chris Brown Billy Buckley and Greg Higgins, (who was making a comeback after a serious injury over 2 years) all having little cameos.

Coach Jimmy Forster said after the game. ‘To many unforced errors, bad decision making at times and a lack of a structured approach lost Oldham the game. A lot to work on but the numbers are good at training so it is not something that can’t be sorted’