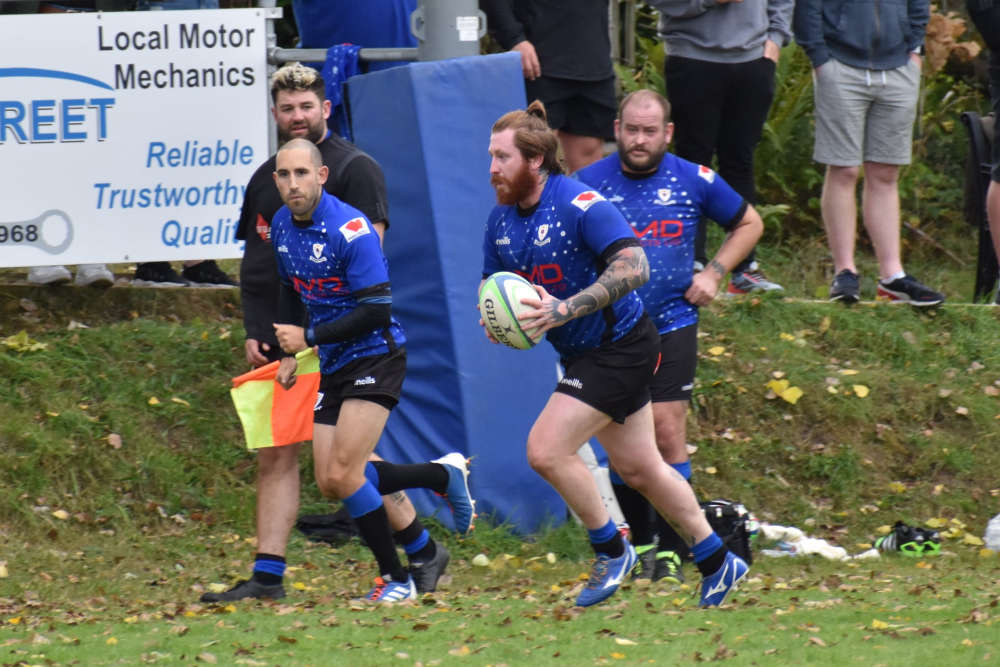 Following last weeks away fixture against Wilmslow being postponed due to Covid related issues, Glossop looked forward to another home game on Saturday as Birkenhead Park made the journey up the M56.

Dave Stanley remained on the sidelines following a concussion two weeks ago, along with Adam Mallinson, Jake Gibson and Elliott Caine who are also injured. Matt Worthington and Mike Lancaster also were not available for selection but this gave an opportunity for Sam Gibson to show his versatility and slot into the back row, with Ryan Maltby and Connor Grime bolstering the pack from the bench.

Matt Sonczak returned on the wing in place of Elliott Caine and Zak Round took the remaining place on the bench having served his suspension.

Birkenhead kicked off towards the Ken Dibble End and immediately had Glossop on the back foot when the hosts failed to deal with the kick. The Merseysider’s took less than five minutes to turn their ascendency into points, when after numerous phases they broke down the right flank and good support play saw prop Martin Donnelly score. The conversion was missed but Birkenhead looked good value for their early lead.

On ten minutes, following more pressure in the Glossop half, Birkenhead had a chance to add to their tally but a penalty attempt at goal rebounded off the right post.

Following this, Glossop began to work their way into the game and exerted some pressure of their own. The remainder of the first half was evenly matched and it became clear that scoring chances would be at a premium as strong defence from both teams looked to be the order of the day. The visitors began to fall foul of the referees whistle as Glossop pressurised and Rob Sonczak continued his fine form with the boot to land three penalties before half time to see The Hillmen leading 9-5 at the interval, despite their lacklustre start.

As Glossop had done in the first half, Birkenhead failed to deal with the kick off and gifted possession back to the hosts. A series of penalties followed as Glossop piled on the pressure but the visiting defence held firm.

Eventually the patience of the match official ran out and Birkenhead were reduced to fourteen men when visiting lock, Ashcroft was yellow carded. After a number of strong forward drives, the Glossop backs were released and Lewis Winterbottom broke through but excellent defence prevented the supporting Zak Round from scoring. However, when the ball was recycled, nobody could stop scrum half, Jonny Tennant from scampering over for a try which Rob Sonczak converted, meaning Glossop headed into the last fifteen minutes leading 16-5.

From here Birkenhead threw the proverbial kitchen sink at The Hillmen and although the tiring home team defended manfully, they were eventually opened up via a neat kick in behind, which was chased down by the Birkenhead right winger. He controlled the ball well with his feet and although the grounding looked dubious, the referee was happy and awarded the try with just two minutes to play.

Poor discipline from the kick off gifted the visitors a penalty and a chance to gain much needed territory. Birkenhead attacked hard around the half way line but the home defence could not be breached and the final act of the game saw Harry Moore win an all important penalty and secure four league points for the home team.

Following the victory, Director of Rugby Rob Stewart said “After an enforced week off due to COVID, this was not quite as polished a performance as previous weeks. However, as always the lads showed great commitment with the combination of another outstanding defensive performance and clinical points accumulation when opportunities presented themselves, brought the just rewards of an extremely good win against a strong side”.