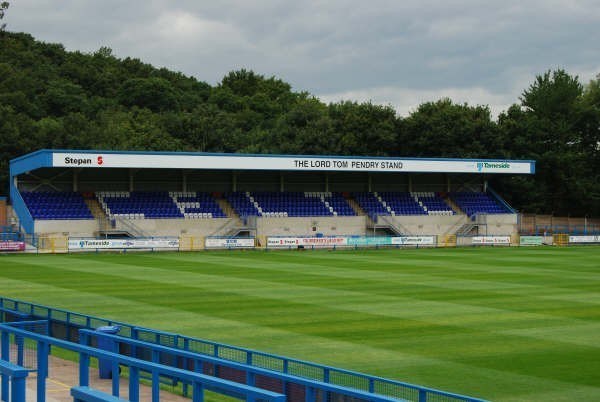 It’s FA Trophy First Qualifying Round action for most of our teams this weekend as they aim to get to the next round a bring in some needed prize money.

One team that won’t be playing this weekend is Mossley as they have been expelled from this year’s competition after fielding an ineligible player in the previous round at Cleethorpes Town.

The Lilywhites were scheduled to travel to Morpeth Town in the First Qualifying Round this weekend but have since discovered that they will no longer be competing in the competition.

Here’s a rundown of the FA Trophy games that are taking place this weekend involving our teams.

Hyde face a short trip to Buxton this weekend as they look to get into the second qualifying round and bag £2450. Hyde have already beaten Buxton this season as they ran out 3-1 winners in the league back in August. Hyde also started the season brilliantly but Buxton will fancy their chances given Hyde’s winless run which now stands at 7 games.

Buxton haven’t had a great start to the season themselves, however. After a play-off campaign last season there was cause for optimism this season as many touted the stags, led by former Ashton United and Stalybridge Celtic manager Paul Phillips, for promotion to the National League North. However, a poor start sees them currently sat in 19th place in the table but their form has improved over the last few games and they have a talented squad so Hyde should be wary.

Stalybridge face a tough task as they face Northern Premier League leaders South Shields at Bower Fold. The two have already faced each other this season with South Shields winning 2-1 after a 93rd-minute winner in a game where Stalybridge played well and could count themselves unlucky.

Stalybridge’s last fixture was an impressive 2-1 victory in the league away at promotion-chasing Warrington Town. It was an unexpected result but it will show South Shields that Bower fold will be a tough journey. South Shields come into the game after a run of two games without a win and they will be reluctant to make it three.

Ashton face a tough trip away at Warrington this weekend but they come into the fixture on the back of a 3-1 win over Gainsborough Trinity at Hurst Cross. Warrington as previously stated come into the game on the back of a 2-1 loss at home to Stalybridge.
Ashton have endured a torrid start to the season as they find themselves in 17th place in the league table after many touting them for promotion. They have also failed to have a substantial cup run under boss Jody Banim so the incentive will be there for the Robins to progress at Warrington.