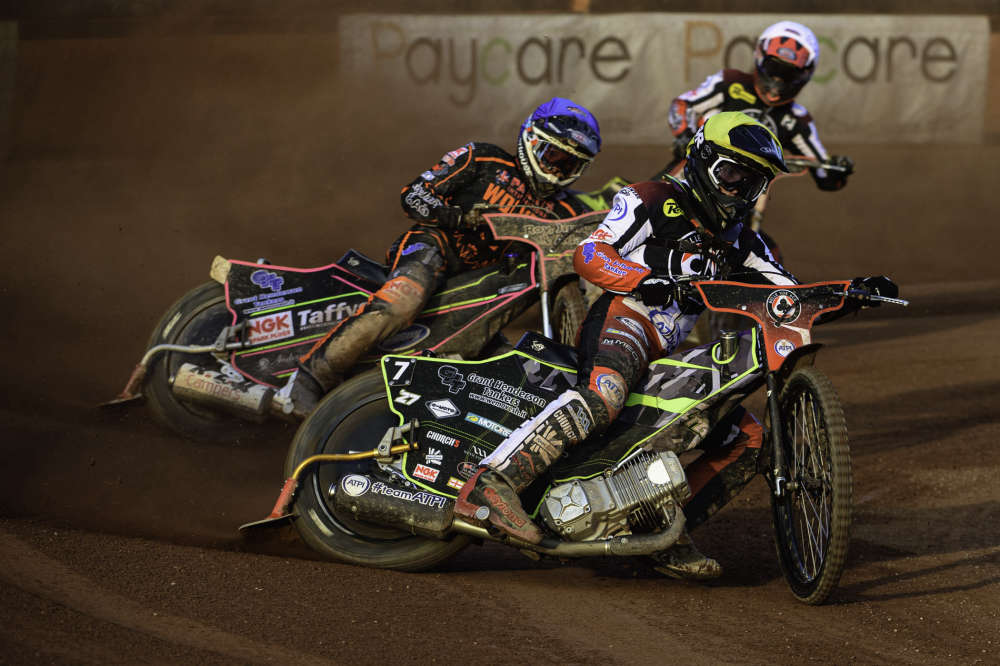 Belle Vue came agonisingly close to grabbing a league point as they went down 49-41 away at Wolverhampton on Monday night.

The Aces had to overcome the last minute withdrawal of skipper Brady Kurtz through illness, but a battling performance fell just short of picking up the consolation league point that they would have collected if they had stayed within 6 points of their hosts.

The Rider Replacement facility, where Kurtz’s programmed races are shared out between his teammates, netted just four points – a fraction of what the captain would have been expected to score.

On a grippy track, which made passing very difficult, the Aces got off to a bad start as Matej Zagar and Jye Etheridge conceded a first race 5-1.

Belle Vue looked to hit straight back in heat 2, as reserves Tom Brennan and Norick Blödorn were fastest from the gate.  But the pair went wide going into the second bend allowing Drew Kemp to split them, with Blödorn dropping to the back to leave the heat shared.

Belle Vue did level the scores in the next, with Max Fricke taking Kurtz’s first ride to team up with Charles Wright for a maximum heat win, and the Aces went 4 points up when man-of-the-match Fricke took back-to-back wins, this time sharing in a 5-1 with Brennan in heat 4.

However the lead was short lived, with the Zagar-Etheridge partnership outpaced in the fifth race to allow the home side level.

It was the Wolves’ turn to open a four-point gap as they took heat 7, and they extended that to six as ex-Ace Steve Worrall rounded the hard working Brennan with one of the night’s few genuine overtaking manoeuvres in the next race.

Worrall teamed up with his skipper Sam Masters to stretch the lead to 10, but that allowed the Aces to bring in Fricke for a Tactical Substitute ride.

And Fricke completed his fifth unbeaten ride of the night, following home Zagar, to bring the scores to 39-33.

The  Aces went into the last 3 races still trailing by just 6 points, but the win was sealed for the home side when Fricke and Zagar were unable to repeat their heroics of two races previous, going down 5-1 in unlucky heat 13.

Wright and Brennan kept Belle Vue in with a chance of the consolation bonus point by taking a 4-2 in the penultimate heat.

That meant the Aces could claim a point with a heat advantage in the final race, but Wolves’ skipper Sam Masters ensured they would be heading back up the M6 pointless, as he took the chequered flag from the ever-chasing Fricke and Wight.

The Belle Vue Colts are in National League action at the National Speedway Stadium tomorrow (Friday) when they face league leaders Berwick.

The Colts are without new signing Jake Mulford, who has a European grasstrack meeting in Denmark which was committed to before he signed for Belle Vue.

The Colts operate the Rider Replacement facility at No.1 which means that all of the remaining team are available to cover his races.

The Colts went down 55-35 in the corresponding away fixture in May, and will be keen to take revenge tomorrow.