Review: Shaun Of The Dead 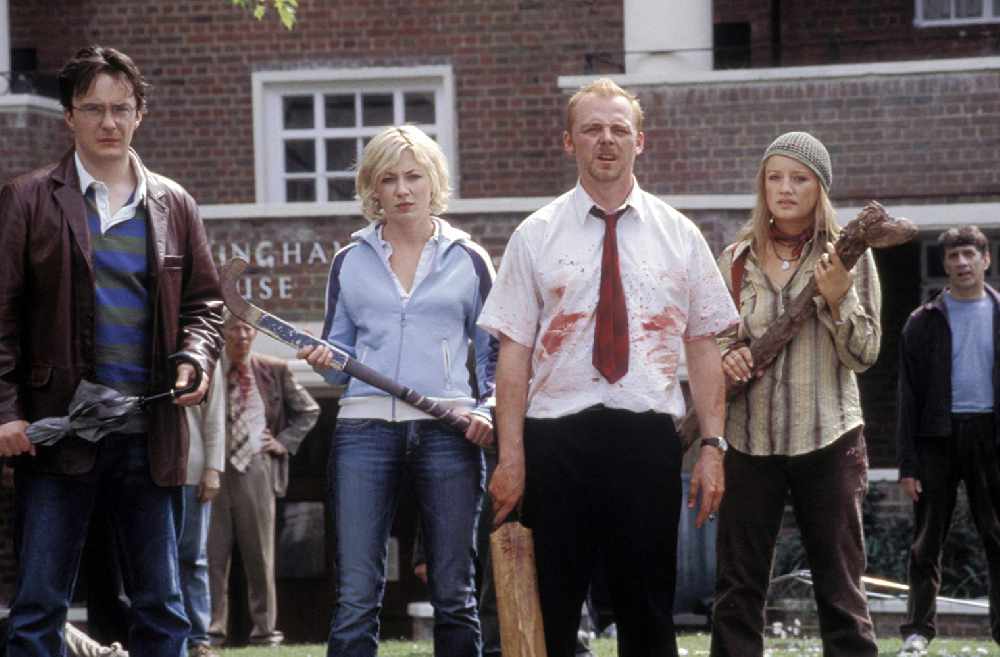 The plot involves electronics store salesman Shaun and his housemate Ed attempting to survive a zombie outbreak in London whilst trying to rescue Shaun’s mother Barbara and ex-girlfriend Liz with the help of their two friends David and Dianne and then wait in the local pub The Winchester until the crisis ends. The film subverts many typical zombie film clichés and parodies elements from other various zombie films such as Night of the Living Dead and 28 Days Later.

The film uses close-up shots to display character reactions to the various situations that they find themselves in. An example of this is during the scene where Shaun and Ed are attacked by a zombie in the house’s back garden and they use various items to attempt to kill the zombie. The close-up shots show the two characters’ bewildered reactions to the zombie’s durability against the various items.

The film also uses wide-shots to display the size and scope of an environment that the characters are in or to emphasise the threat that the characters are encountering. An example of this is the scene in which Shaun, Ed, Barbara, Liz, David and Dianne are walking through the streets of London whilst making their way to The Winchester as the camera gradually pans to a wide shot displaying a hoard of zombies precariously close to them.

The characters are surprisingly complex for a comedy film. For example, Shaun, the main protagonist, played by Simon Pegg, is shown to be very depressed at the star of the film having, recently broken up with his girlfriend and his work colleagues to the electronics store constantly disrespecting him. However, by the end of the film, he seemed to be fairly content with his life, having moved in with his girlfriend and society returning to normal. Ed, played by Nick Frost, is portrayed as lazy and somewhat of a slob who doesn’t work and annoys his and Shaun’s neighbours. However, he does care about those close to him, as shown near the ending in which he promises to keep the zombies distracted while Shaun and Liz escape.

The soundtrack features a variety of genres and musical styles, from pop to soft rock. Examples of this include ‘’Don’t Stop Me Now’ by Queen, which plays during the scene when Shaun, Ed, Liz, David and Dianne are fighting against the zombie in The Winchester, with the light-hearted tone of the song providing an effective contrast to the grim and hopeless tone of the scene. Another example is this is the song ‘’Mister Mental’’ by The Eighties Matchbox B-Line Disaster, which plays during the scene with Shaun and Ed throwing a series a vinyl discs and CDs at one of the attacking zombies, which emphasises the humour and absurdity of the situation.

Overall, I would rate ‘Shaun of the Dead’ as a 4.5/5. A lot of the references to other zombie films are very subtle yet help to emphasis the parody tone of the film. The main characters are quite complex and have interesting internal conflicts, while the secondary characters are not very well developed. The soundtrack is varied and includes many songs and musical cues that are very well integrated into the scenes, however some of the songs are either too long or too short to have any thematic impact. The plot has a very good juxtaposition to it, with some scenes being very comedic and other scenes having a very dark element of tragedy to them.