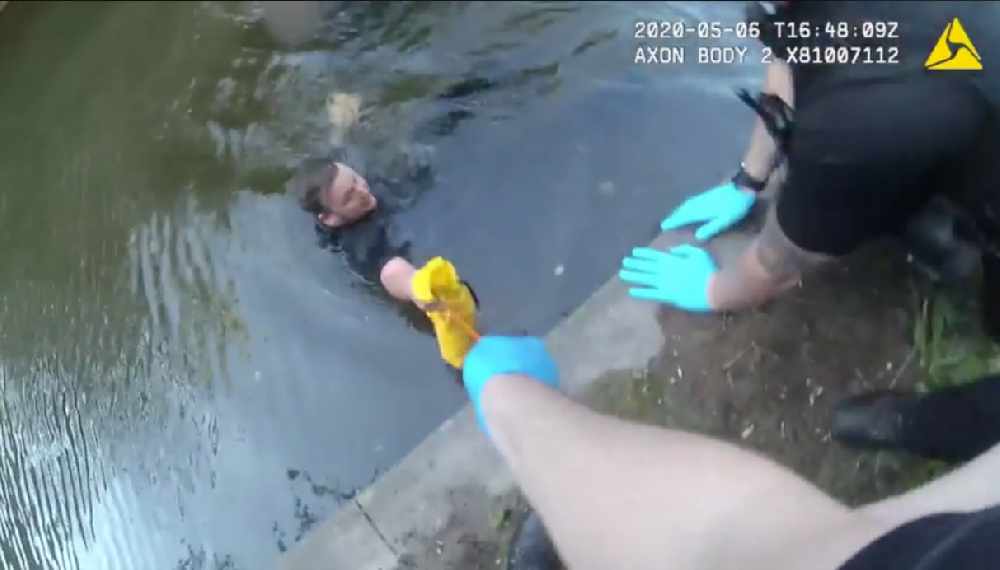 Watch the moment a heroic Police Constable bravely jumped into Ashton Canal to rescue a man who was unresponsive in the water.

Greater Manchester Police were called to the canal, close to Cavendish Mill in Ashton, to reports of concern for a man's welfare, shortly before 5pm last Wednesday (May 13).

When they arrived, officers quickly spotted a man in the canal and called out to direct him to the side of the canal so they could throw guide lines towards him - but he didn't respond.

Concerned for his safety and noticing that he was drifting towards an unlit tunnel, which would have led the man out of sight, PC Briggs took the decision to jump into the canal and swim towards him.

Once PC Briggs reached the man, officers standing at the side pulled them both to safety using a rescue line.

The man, whose identity hasn't yet been released by police, was treated by paramedics before being taken to hospital to further receive treatment.

And the officer who rescued him has been praised by his bosses for his swift actions in saving the man.

Chief Superintendent Chris Allsop for GMP’s Oldham, Rochdale and Tameside districts, said: "As with any incident we respond to, the safety of the public is our number one priority and sometimes that means putting them first, ahead of your own safety.

"Every day our officers and staff go above and beyond to protect the communities we serve and this is certainly a great act of heroism.

"PC Briggs put himself in danger to rescue the man and thanks to his brave and selfless actions, as well as the help of other officers, the man survived and is receiving the support he needs.

"In this current climate, it can be even more difficult to do our jobs safely and I would like to personally commend PC Briggs’ actions which were a prime example of why people join the force – to protect our communities and make sure they are safe from harm."

The footage above was taken from officers' bodycam.