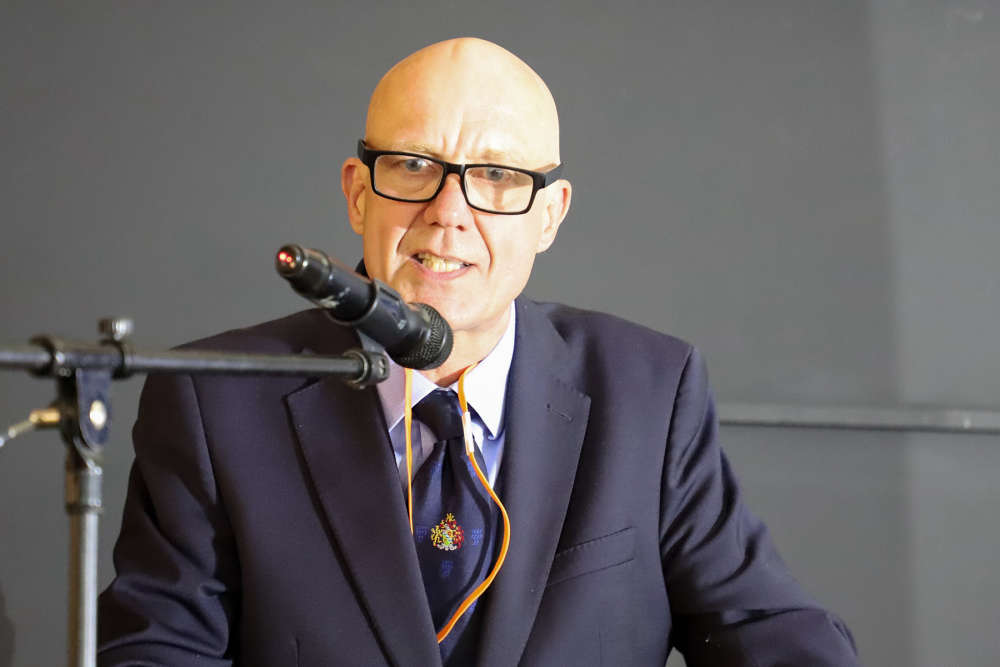 Tameside's long-standing chief executive has suddenly resigned after more than three decades working at the council.

Steven Pleasant, who has held the role of head of the local authority’s staff since 2009, after joining the town hall in 1988, has told councillors he is stepping down with ‘immediate effect’.

It is understood his sudden resignation precedes an extraordinary meeting of the full council, due to be held next week, where a vote was due to take place on his ‘conduct’.

This related to a message he posted on Twitter ahead of the local elections, which has since been deleted.

He used his official chief executive Twitter account to respond to comments made by a Conservative voter on BBC’s Question Time, where a clip from the TV programme showed an audience member who voted for the Tories telling minister Damian Hinds his government was a ‘disappointment’.

Mr Pleasant replied to the video saying: “She was good. Tory voter with compassion and empathy for others. Who knew !!”

He apologised for the comment, saying it was ‘not considered’ and that he ‘should have worded any sentiments very differently’.

In his role as chief executive he was also the council’s returning officer, and subsequently went on to run the local elections on May 5 despite anger from Tameside’s Tory group about the comment.

It is understood a report about the post by the council’s monitoring officer, Sandra Stewart, is due to be presented at the extraordinary full council meeting on June 14.

The meeting will also discuss a scathing report from Ofsted about the council’s children’s services department, which has been stuck as ‘requires improvement’ since 2019, after being rated ‘inadequate’ in 2016.

In a letter to councillors, MPs and council staff, Mr Pleasant said: “With the demise of CCG (clinical commissioning group) this month and advent of the new political leadership now feels the right time for me to step down and start a new chapter in my life.

“The leader has agreed that I can leave with immediate effect. I have worked for the council for 34 amazing years.

“It has been a privilege to serve over 13 of them as your chief executive and for six years as the accountable officer for the CCG.”

He referenced ‘many achievements’ which had left the council to be voted ‘council of the year’ and the CCG rated ‘outstanding’ by the NHS.

These included the integration of the council and CCG into a single framework, the development of Tameside One, the restoration of Ashton Old Baths, and the building of Tameside Wellness Centre.

Mr Pleasant added: “We have also faced many external challenges during that time, especially the relentless austerity and cuts.

“Leading the organisation through the last two years of the Covid pandemic has probably been the most challenging and yet perversely the most rewarding in terms of how our staff and our community responded.

“What makes Tameside special and what has always inspired me are the people who work in our organisation.

“The relentless commitment you show to deliver the best you can for our communities has made me so proud. The myriad of stories I have witnessed over the years that sit behind all that work and the impact it has had on people’s lives are the memories I will treasure more than any other.

“So, this will be my final brief. I want to thank all the incredible people who have personally supported me over the years and made my career in Tameside such a tremendous journey and finally to wish you all the very best for the future.”

New council leader Gerald Cooney said that Mr Pleasant had been a ‘great servant of Tameside and the local NHS’.

“Steven has a long and successful track record in leading our organisation through the most challenging period in its history,” Councillor Cooney added.

“He was awarded an MBE for his work with asylum seekers and refugees. I know I speak on behalf of everyone when I wish him the very best in his new endeavours.”

Joint chairs of the Tameside and Glossop clinical commissioning group Dr Ashwin Ramachandra and Dr Asad Ali said in a joint statement: “Steven has been instrumental in our pioneering journey for delivering integrated health and care services across Tameside. His role was unique in managing both the council and the CCG.

“His leadership was critical in bringing the NHS and local government together and in delivering greatly improved services for the people of Tameside and Glossop over the last six years. His ground breaking approach has provided a blueprint locally and nationally for future working.”

However Coun Liam Billington, the Conservative shadow first deputy for finance and performance said they now need a ‘fresh pair of eyes’ from outside the borough to ‘deal with the issues that Tameside is facing’.

“We need someone that will support our children’s services department, but will also tackle the lack of progress in growth and regeneration of our town centres,” he added.