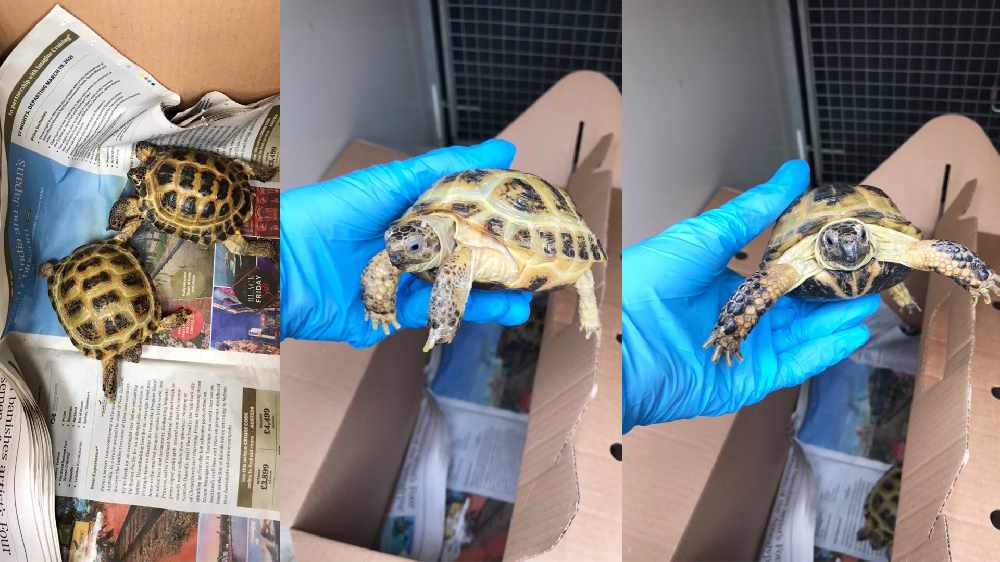 The RSPCA are appealing for anyone who might be struggling to look after their exotic pets in this trying time to seek help and advice rather than abandoning their animals.

It comes after two tortoises were rescued by the RSPCA in Bramhall Park on Monday.

The pair, a male and a female, were found abandoned in a cardboard box by a member of the public.

Exotics Officer Gina Ratcliff said:  “The two tortoises were quite lethargic when my Animal Collection Officer colleague Emma Dwan collected them from the concerned member of public who had found them.  But happily, other than that they seemed healthy, though the female was a little subdued to start with.

“They will now be fostered until we are in a position to put them up for rehoming.  We think they are both quite young, and now they are living in appropriate conditions, they have become bright and alert.

“It’s so sad when pets are just abandoned, and we urge anyone who is struggling to contact an reptile expert for advice rather than abandoning an animal to fend for itself.

“Reptiles such as tortoises have no way of keeping themselves warm so abandoning them is particularly dangerous, as it can seriously compromise their health, possibly even leading to death if they aren’t found straight away.”

Exotic pets, including tortoises, often end up in the RSPCA’s care after people realise they're not easy to care for or once the novelty wears off.  Others are rescued after they have been abandoned, escaped or been released on purpose.

The RSPCA would encourage prospective owners of any reptile, including tortoises, to thoroughly research the animal's needs, using expert sources, and only consider keeping one if they can ensure they are fully able to provide for these needs.  Caring for reptiles can be challenging in a domestic environment because their needs are just the same as they would be in the wild and are fundamentally linked to certain behaviours, diets or environmental conditions that can be difficult to replicate in a home.