RUGBY UNION: Glossop fall to second defeat of the season 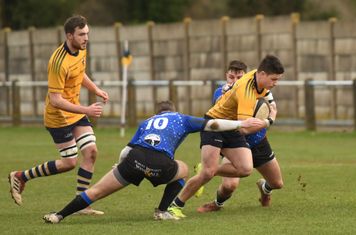 Glossop travelled to fifth placed Anselmians on Saturday, and despite leading for parts and being in the game until the last minute, The Hillmen succumbed to their second defeat of the season.

Glossop travelled with a strong squad despite a number of enforced changes through injury and unavailability, but still went into the game in a positive mood.

The visitors started well, but their early pressure went without reward, with good home defence earning Anselmians a penalty. From here the home team worked their way upfield, testing the Glossop defence. They eventually made a breakthrough on fifteen minutes with a well struck penalty by player / coach McGovern. This was followed up with a similar penalty three minutes later, to give them a 6-0 lead.

Undeterred, the visitors stuck to their task, and on 25 minutes they took the lead with a converted try. A scrum close to the Anselmians line was controlled at the back by Dave Stanley, who broke and released the ball to Zak Round to score under the posts, leaving Matt Sonczak with a simple conversion making the score 6-7. 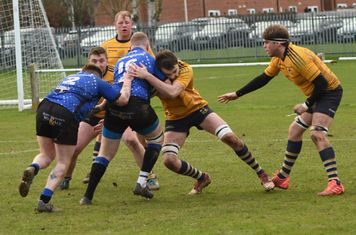 With two evenly matched teams battling it out, it was no surprise when a “see-saw” pattern emerged in the game, with the lead changing hands a number of times throughout.

On 31 minutes, Anselmians regained the lead, capitalising on a Glossop mistake to move the ball well to the right wing where Andrew Cummins went over for an unconverted score (11-10).

As before, Glossop came back strong and Jonny Tennant orchestrated a fantastic try down the right flank when he broke from inside his own half, feeding Max Horsfall to score a try which Matt Sonczak concerted (11-17).

Not to be outdone, just a minute later Anselmians were camped in Glossop territory, and patient build up play saw flanker Dowler drive over from close range for a converted score. In the process a fracas broke out, and Glossop were disappointed to see a red card shown to lock Wilkinson, with his opposite number Jack Richards receiving a yellow card.

The teams turned around with Glossop trailing 18-17. Whilst they had the benefit of the wind behind them in the second forty, they knew they had a mountain to climb with only fourteen men.

The visitors started the second half well and were rewarded when they took the lead with a Matt Sonczak penalty on 46 mins (18-20).

Glossop held the lead for the next 25 minutes as both teams struggled to break down their opponents defence but were dealt a hammer blow in the 70th minute when Glossop hooker Harry Moore was yellow carded allowing Anselmians to convert the resultant penalty taking the lead at 21-20. Only ten minutes to play with Glossop reduced to thirteen men, one point in it, could Glossop recover the lead again?

The plucky visitors had a chance to retake the lead a few minutes later with a long range penalty attempt from Tom Deaenaley. The kick was accurate but just dropped under the crossbar to the relief of the home team.

In the final minute, Glossop threw everything at the hosts. In their attempt to play out of their own half, they were forced into conceding a penalty which McGovern converted in the final act of the match, to leave the final score at 24-20, meaning the Hillmen had to settle for just a losing bonus point.