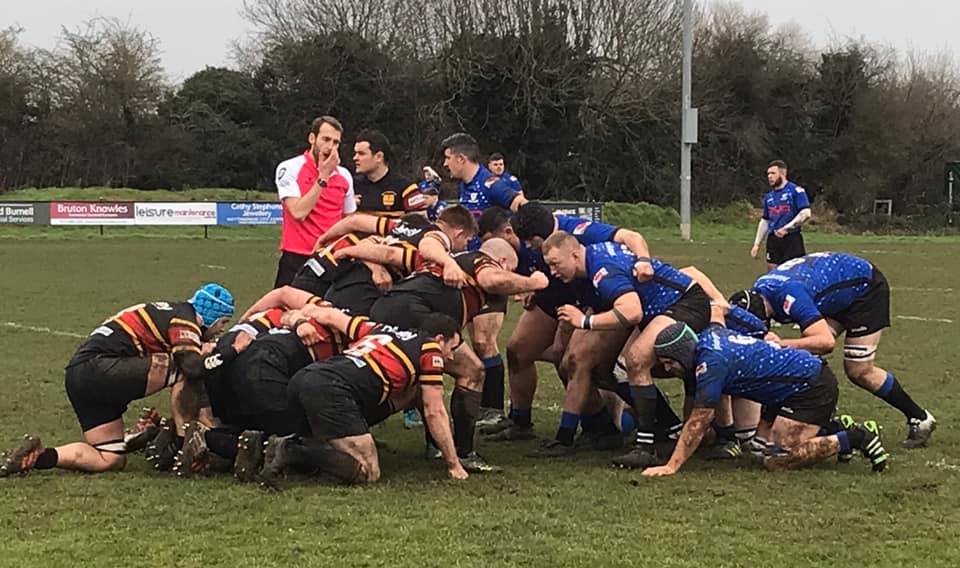 A second half hat trick by scrum half Johnny Tennant propelled Glossop into the last four of the Notts, Lincs and Derby’s cup,  as they beat West Bridgford away in a thrilling contest.

In previous years, Glossop, who play in the seventh tier, have had success in winning the NLD shield, but now find themselves entered into the more elite cup competition, where they often face teams up to level five, meaning wins are hard to come by, especially away from home. West Bridgford are currently enjoying themselves in the Midlands 1 division (level 6), and are sitting fourth in the table following promotion last season. Despite the level difference, Glossop travelled to Nottingham with confidence, having suffered only one defeat this season and with almost a full squad to select from. Most notable absentees were fly half Tom Dearnaley, lock Sam Wilkinson and influential tight head prop Ben Chadwick. It is a testament to the impressive squad depth that the Hillmen were able to replace these players without major disruption to the team.

Things couldn’t have started much worse for Glossop who trailed 7-0 after just 90 seconds. A mismatch in the midfield saw the ball moved well by the hosts and they were rewarded with a try by left winger Ollie Haddon, which was converted by their captain Callum Gunn.

The Hillmen were shocked but the nerves were settled when Matt Sonczak, playing at fly half, nudged over a penalty just five minutes later to reduce the deficit to 7-3.

The remainder of the half saw both defences tested without any breakthrough, until the 35th minute when some good build up play by Glossop saw back row Damien Chabas score a well constructed try which Sonczak converted for 7-10.

It looked as though the visitors would turn around holding a narrow lead but two minutes of poor discipline before the interval gifted West Bridgford two kickable penalties and their reliable Gunn obliged on both occasions, giving the hosts a 13-10 lead.

The early exchanges of the second half were dominated by the home team and Glossop were dealt a hammer blow when Dan Clark was shown a yellow card early on.

With their numerical advantage in the forwards, West Bridgford kicked into the corner and a well executed driving maul saw them stretch their lead with a try by Rob Sutton. Gunn was again on target with their conversion, 20-10.

When Clark returned to the fray, Glossop got back to their task and the last quarter of the tie saw The Hillmen pull off a great comeback.

On 60 minutes, good handling down the right flank released winger Max Horsfall, who made good ground before finding scrum half Tennant in support on the inside for an unconverted try to get Glossop back in the game at 20-15.

Just a few minutes later it was that man Tennant again who crossed the whitewash, when he managed to sneak over following good pressure from the Glossop pack. Sonczak was unlucky to see his conversion attempt bounce back off the upright but Glossop were now level at 20-20.

The rejuvenated Glossop team now had their tails up and were chasing the win. They set up camp in the West Bridgford ‘22, drawing some excellent defence from the home team. Glossop remained patient and when they were just two yards short of the line, Tennant spotted the smallest of gaps on the blind side of a ruck, showing great intuition and athleticism to dive over and dot the ball down in the corner. With six minutes to play, it was a case of deja vu for Sonczak who’s conversion attempt from the touch line again struck the left upright.

Glossop knew they needed to secure the ball from the restart and control play well to run down the clock. However, West Bridgford beat Glossop to the kick off and were able to launch an attack. They took play deep into the Glossop half and were able to win two penalties which they kicked into the corner, looking to replicate their earlier try. It was now all hands to the pump for Glossop, who were able to win the ball back with just a minute to play and hold on to seal a place in the semi-final, where an away trip to face Dronfield is their reward.

Next Saturday, it's back to the big task of winning the league, when Glossop play Aspatria at home. Every game in the league is a huge challenge now for Glossop, as other teams are determined to take something from us.