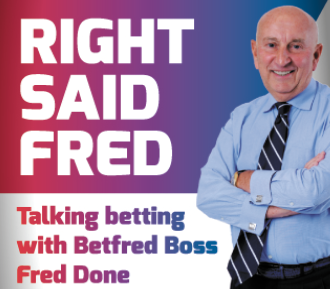 I can’t deny that it’s a very proud week for Betfred, and we’re all walking that little bit taller around the shops, and at head office.

We’ve long been synonymous with rugby league, and it’s the Betfred World Club Challenge on Saturday evening between St Helens and the Sydney Roosters, at the Totally Wicked.

If you think Saints can keep it tight or even better then that might be the way to go, but we’re all hoping that it will be a fabulous game of rugby league, whatever the outcome. Be nice if the recent vile weather relented a bit, eh?

n As if that wasn’t enough, just a few hours later, in Las Vegas, Manchester-born Tyson Fury bids to win the heavyweight championship of the world in what could be an epic encounter with Deontay Wilder; a battle for the ages, and sponsored by Betfred. It’s absolutely brilliant to be involved in such amazing sporting moments. Just fantastic.

n Saints might not be in Super League action this week, but there’s still plenty going on. Salford welcome Leeds to the AJ Bell on Saturday afternoon, and of course would love to grab their second win of the season. The Rhinos are favs though at Betfred (4/7), with Salford 6/4, and the tie 20/1. The Red Devils only succumbed late to Huddersfield on Valentine’s Day, and the sin-binning of Kevin Brown certainly didn’t help. The gods might not have been smiling then, but this is a big one that they can pull off.

n Always a pleasure to beat Chelsea, and though Monday night’s win at Stamford Bridge might not have been one of our best performances, to see United cut the gap in the race for a possible Champions League spot was great. VAR hovered over everything as it generally does, though, and if it’s the answer to football’s refereeing ills, goodness knows what the question was.

Can’t move without being reminded of the shock news concerning City. They’ve got their two-year Champions League ban, but will appeal to the Court of Arbitration for Sport. There seems to be plenty of bad feeling on both sides, and I only hope a decent and fair outcome can be reached – but I guess it could be messy and lengthy.

City have Real Madrid in their sights next week in the first leg round of 16 clash at the Bernabeu – and despite all the shenanigans, Betfred have the Blues at 4/1 favourites to lift the famous old trophy in Turkey at the end of May.

Doesn’t take a genius to figure that their motivation for winning it was ramped up about 50-fold after the UEFA announcement. They’d love it, just love it, if they could somehow pull it off.

Have a brilliant week’s sport, and as always, look after yourselves.