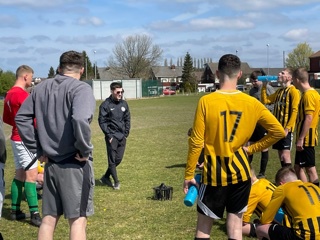 Glossop Wasps were eventually beaten on penalties following a largely quiet contest which burst into life inside the final 20 minutes.

Neither side had much to shout about in a first-half which involved little action. Both defences were well organised, preventing either side from being able to create any clear-cut chances.

Mason Davies arguably had the best sight of goal as he carved out an opportunity around a quarter of an hour in, although he couldn’t keep his shot down.

Shortly after the restart, the Wasps threatened through Damon Worsley, when he showed nice footwork on the edge of the area and perhaps could’ve had an effort on goal but opted for a pass which was snuffed out by the hosts.

The came a worrying moment for Sol Lester and his side. Davies displayed great speed and skill as he made a menacing run down the right wing before being clattered to ground, leaving him in some clear discomfort. After this Davies did attempt to remain on the field, before injury forced him off – it will be hoped his spell on the side-lines is short lived as the Wasps look to maintain their title charge.

Entering the final 20 minutes, the visitors were dominating the ball but their end product was lacking. Meanwhile, Railway were looking to break.

On 72 minutes, though, came the first real moment of excitement and with it, a first goal, and it was advantage to the Wasps. After the Wasps won a foul in the middle of the park, Darren Scowcroft stepped up to send a brilliant ball up field and into a dangerous area. The goalkeeper came racing off his line to collect the ball in the air but was beaten to it by the head of Austin Valentine-Clarke, and as the ball was looping goalwards, Jake Hallam reacted quickest to ensure it went in by bundling the ball over the line, much to his and the Wasps’ delight.

Looking to hit back, Railway gave the Wasps a late scare with a ball into the box which bounced across goal before the threat was cut out.

With seven minutes of normal time remaining, Railway did get an equaliser. Another ball into the box was not dealt with this time by the Wasps, who failed to clear their lines, allowing the Railway attacker to pounce on the ball, move it onto his right and finish at the near post.

Scowcroft came close to scoring some goal in minute 90 with a thunderous strike from a free-kick, the goalkeeper did well to tip it over for a corner.

Despite this it was the home side that looked to have snatched the winner in the first minute of added time, winning a corner of their own and taking the lead with a header at the back post.

As if three goals in the space of 19 minutes hadn’t been entertaining enough, there was still time for a dramatic fourth. Just after managing to turn the scores round, Railway conceded a penalty, Ethan McLauchlan being fouled in the area. Now deep into added time, it was McLauchlan who put the ball on the spot and was given the responsibility to take it, and he took it, proving the calmest person on the pitch to level the scores with a fantastic penalty. It proved to be the final kick of the game.

The tie then headed straight to penalties where Railway ultimately came out on top, converting four to the Wasps’ two.