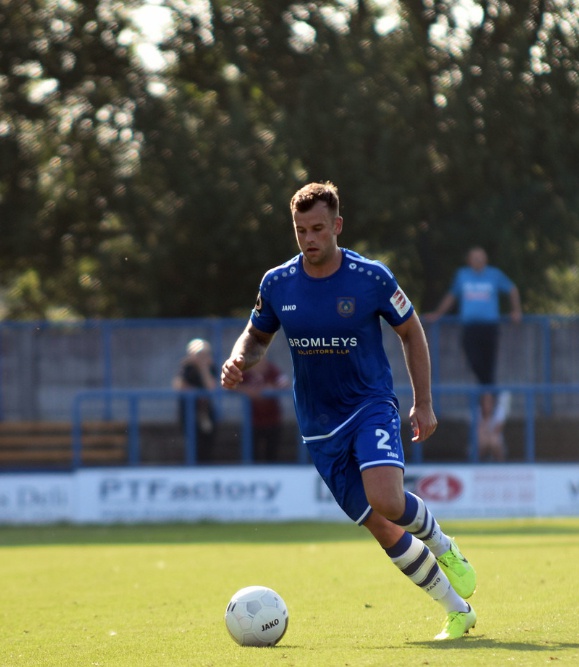 The Nash trailed at half time when Jordan Thewlis converted a penalty of his own for the visitors and their task was made doubly difficult when Owen Watkinson was given a straight red card for an elbow on Tyrell Warren.

But Curzon had looked dangerous all afternoon and stuck doggedly to their task. When Mike Calveley was fouled in the area, Halls found the corner from 12 yards.

The result means the Nash remain 19th and are now eight points ahead of the relegation zone after a fourth draw in their last five games.

The disappointment of conceding late leveller to York City last week was overwhelmed by the positivity of the performance and Mark Bradshaw rewarded those players by naming an unchanged starting line-up.

But Boston – who have climbed to third after a run of six straight wins in January and February – who started the brighter team and they should have taken the lead less than three minutes in when Martyn Woolford latched onto Thewlis’ pass. He had plenty time and space to pick his spot, but Cam Mason was able to pull off an excellent save low to his left.

Curzon overcame that early pressure and had a good opportunity to take the lead quarter of an hour in when Evans released Watkinson into the box. The on-loan Blackpool striker did well to cut back onto his right foot and forced Peter Crook into his first of many saves.

Five minutes later Boston were presented with the perfect opportunity to take the lead when Mo Ali brought down Woolford in the area and Thewlis confidently sent Mason the wrong way from the subsequent spot kick.

Woolford poked the ball inches wide of Mason’s post moments later while at the other end Isaac Sinclair’s curling effort towards the far corner was beaten away by Crook.

The second half followed a similar pattern to the first with Boston starting strong and going close through Mulhern’s flashed effort across goal.

Again, though, the Nash began to create plenty chances of their own and called Crook into action three times in the space of two minutes to preserve his side’s lead.

First, he denied Mike Calveley when he burst into the box before making a block from Sinclair and tipping Olly Thornley’s header over the bar.

With Curzon on top, their momentum took a hit in the 64th minute when referee Daniel Locker sent off Watkinson for leading with his elbows as he challenged Warren for the ball. Their appeared to be no intent on behalf of the Nash striker but the contact was forceful enough to be deemed dangerous play.

That necessitated a change in shape, but Bradshaw made two attacking changes by bringing on Fabio Tavares for his home debut and Tunde Bayode, sacrificing a defender in the process.

Indeed, the sending off had little effect on the flow of the game as Curzon continued to push for an equaliser and they got their reward ten minutes from time.

Calveley put his body on the line attempting to win the ball and took a boot to the face for his efforts leaving the referee little option but to point to the spot.

Halls was the man to step up and although Crook guessed the right way and got fingertips to the shot, there was too much power to keep it out.