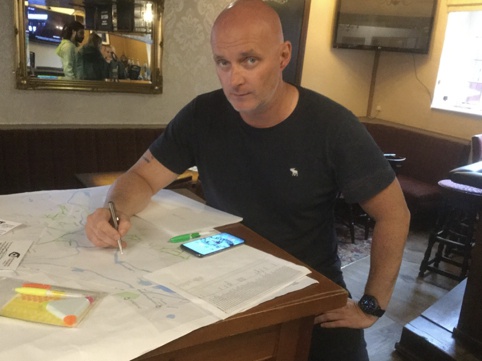 A safety champion is encouraging more Saddleworth villagers to become their community’s eyes and ears, with the launch of the latest Neighbourhood Crime Watch group.

About 100 people attended a meeting at Dobcross Band Club to hear Lee Hudson (pictured) outline the initiative based on the successful group he started in Greenfield in November 2017.

The original group, formed after a spate of car jackings and other crimes in the village, is flourishing with nearly 1,000 members.

Their aim is to alert others to any suspicious activity or crimes, raise awareness and promote vigilance to deter criminals and find ways to make the community safer.

And Greenfield currently has a network of 86 resident street co-ordinators, who share information with neighbours across 101 streets. They work closely with police, who attend their bi-monthly meetings, as well as local businesses, Tesco and YOLO.

“Everybody is aware of the cuts the police face and is it is about helping them through that by being an extra pair of eyes and ears,” explained Lee.

“Crime has fallen 16 per cent in the area since we launched the group so I believe we are making a difference. Elderly people feel relieved they now have someone to channel any concerns to or ask questions.”

And Mr Hudson praised local GMP PC Lee Cullen as a ‘fantastic advocate’ of the scheme and who wants to help push the initiative.

“If we can get all the villages set up we can make a massive difference for the area,” he added.

In  Dobcross, 11 villagers stepped forward to agree how to proceed, forming an administration team and network of supporters with ample opportunity for those who were unable to attend the meeting to join. The group would be initially be mentored by Mr Hudson.

John Warham, chair of the Dobcross Village Community, said: “We need people from all parts of the village to come together to get this off the ground.

“We heard about the success of the group in Greenfield and I am sure we can do the same.”

Speaking at the meeting, PC Cullen welcomed the start of another group to help police reduce crime across the community.

“Policing is in a bad place as we’ve faced so many cuts and changes,” he admitted.

“But if you work with us, we will see better results. Saddleworth is perceived to be affluent so we fall foul of a lot of acquisitive crime from criminals coming into the area.”

And he added: ”If you see something suspicious then tell us – we can’t do anything if you don’t. We need to build resilience across the community.”

Denshaw, who sent Paul Gibson, a representative, to the meeting, has already launched a scheme in September based around a WhatsApp message group.