Metrolink section 'busiest' in world but crime on the rise 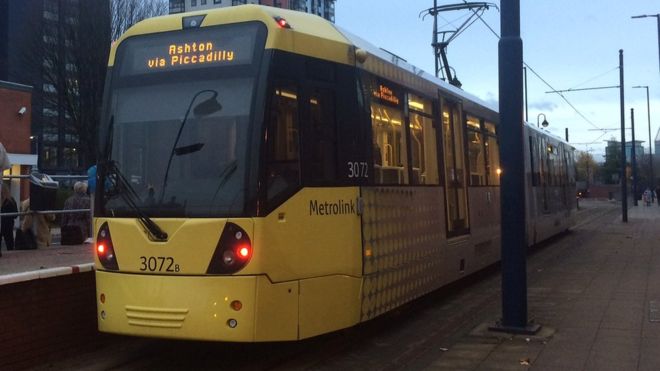 A section of Greater Manchester’s Metrolink is the busiest light rail line in the world – but crime and anti-social behaviour on the tram network is on the rise.

The total number of recorded incidents rose by nearly a third in the last year, with most incidents occurring at night and during the school holidays.

There was also a ‘significant’ increase in ‘tram-surfing’ despite ongoing attempts to tackle the dangerous craze.

Councillors were updated on the tram network’s performance between last August and this summer in a briefing to the region’s transport committee.

Despite growing numbers of incidents on the line, bosses say Metrolink has continued to thrive in popularity, with an extra three million journeys made in the year.

And a study commissioned by operators KeolisAmey Metrolink (KAM) revealed the city centre corridor between Cornbrook and St Peter’s Square is the ‘busiest section of light rail anywhere in the world’.

More than 63 incidents of tram-surfing, where people cling onto trams as they move, were recorded between July 2018 and the end of August this year.

The Oldham-Rochdale line remains a hotspot for crime, with incidents of antisocial behaviour, drug-taking and sexual harassment taking place within days of each other in May.

On average, 165 incidents of crime and antisocial behaviour per month were reported across the network, with the majority occurring at night.

A higher number of incidents were reported at times that ‘closely correlated to dates of school holidays’, says the report.

But the number of crimes per month has reduced in recent months, which has been welcomed by the head of Metrolink, Danny Vaughan.

But Oldham councillor Howard Sykes called for a list of incidents to be presented to the committee on a line-by-line basis.

“Having it lumped together potentially masks some issues,” said Coun Sykes.

“I’m particularly interested in the Oldham-Rochdale line because it has been a major issue.

“People are telling me we’re getting a hold of it, but I’m less than convinced.

From mid-November, Greater Manchester Police will deploy a team of 50 uniformed officers to patrol the network in place of community support officers.

Mr Vaughan said the rollout was a ‘welcome development’ that Metrolink would be ‘watching closely’.

Metrolink continues to grow with 45 million trips recorded on the network in the year to the end of August – up from 42m trips in the equivalent period in August 2018.

To cope with additional demand, the number of double trams was increased on the Altrincham, Bury and East Didsbury lines. Capacity on the Ashton line was also increased, changing to a six-minute service frequency in January.

The £350m Trafford Park extension, which will include six new stops across a 5.5km line, is also on track to open next year.

But in January, all services on the Eccles line were suspended for two days after a serious overhead line fault near Media City.

And on the morning of the transport committee meeting, a failed tram stranded Bury councillor Roy Walker at the Bury tram stop.

He said there was a lack of information conveyed to waiting passengers, who received mixed messages as to whether they needed to take a bus.

“Now I assure you I kept calm and ate my breakfast but there were people there getting very irate,” said Coun Walker.

“When a tram breaks down, people need to be properly informed.”

Mr Vaughan apologised for the delay which came after the tram got stuck in a tunnel. He added: “It was quite a difficult situation with passengers onboard, and the safety of passengers is first and foremost.”

Sweltering summer temperatures also led to a significant number of faults, with trams forced to go slower in July to protect the tracks and overhead lines.

Mr Vaughan described the summer as ‘difficult’ but said Metrolink performance had since returned to a ‘steady state’.

Metrolink has been nominated for ‘Rail Operator of the Year’ at this year’s National Transport Awards after scoring 90pc customer satisfaction ratings.

Customer satisfaction was measured by Transport Focus, the independent national body which advocates for passengers on public transport including bus and rail.

Mr Vaughan said: “It’s something we’re incredibly proud of. It’s really great for light rail operation to be up against some of the big rail operators.”

Councillors were also told that Metrolink’s performance was being actively compared to similar transport networks across the world.

And a report to the committee said: “A recent study commissioned by KAM found that the section between Cornbrook and St Peters Square is the busiest section of the light rail anywhere in the world.

“A separate independent study ranked Metrolink as fifth best from 32 networks studies, and first for ‘utilisation of assets’.