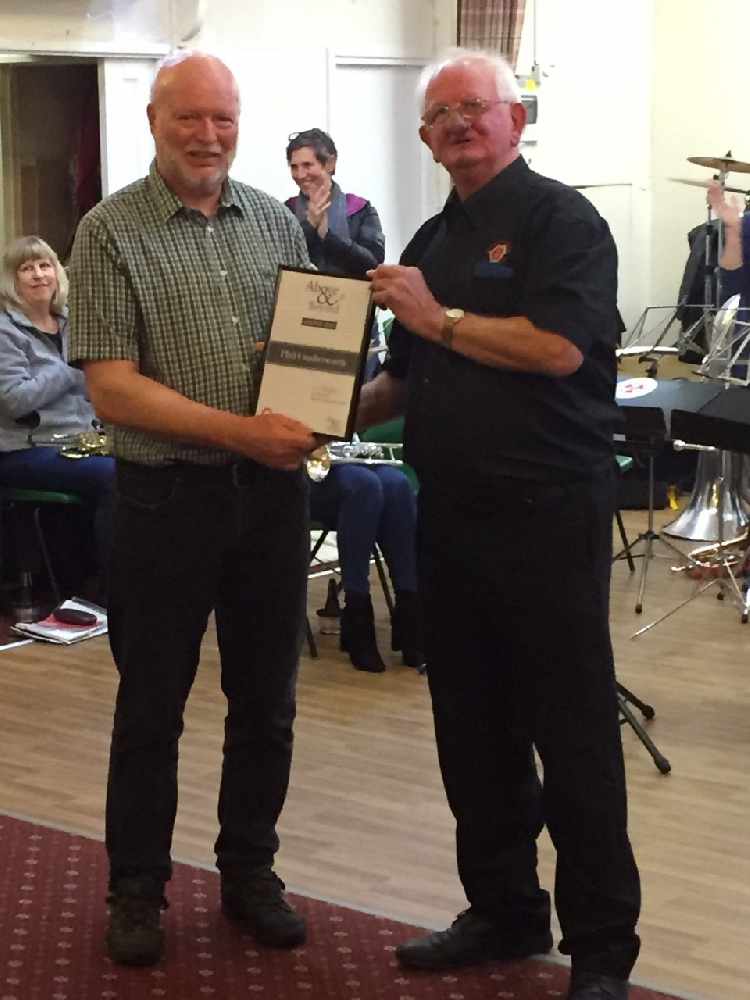 The genial unassuming founder and musical director of a brass band has hit a high note by being nominated for a coveted community award.

At the end of Dobcross Brass Monkeys rehearsal, their founder and musical director Phil Cumberworth had the surprise accolade sprung on him by his long-standing friend and steward of Dobcross Band Club, John Holden.

The prestigious Above and Beyond awards are presented each year to unassuming people who go the extra mile to help their friends, neighbours or the community.

They were nominated by Saddleworth’s villagers themselves. The  awards scheme is supported by local ward councillors and the Saddleworth and Lees District Team.

Phil’s award citation said: “Phil has been associated with Dobcross Band Club for umpteen years. Initially recruited as a player in the Silver Band, his contribution to the Club over many years has been varied and invaluable.

“He always puts up and takes down the Club’s external Christmas lights and in addition to serving on both Band and Club Committees, he has created marketing materials, applied for grants, organised fundraising events and set up and administered the Club’s first-ever web page.

“He has been instrumental in upgrading the Club’s AV equipment, dealt with many maintenance issues and even worked voluntarily behind the bar when the Club was struggling financially!

“He is now conductor of the Brass Monkeys - the Club’s unique adult training band.

“The band comprises of adults who, like many others, have gone through life wishing they had learned to play a musical instrument and read music when they were younger and not realising that they still can!

“They play around 14 concerts a year and often donate proceeds to support the expenses of other local bands that earn places in the National Finals in Cheltenham.

“There is a great deal of camaraderie and friendship within the band - a testament to Phil’s personality and ability to motivate.

“Phil is one of the nicest, kindest people you could ever meet and always willing to lend a hand.

“Despite dealing with close family health issues, he still remains loyal and committed to the Club and his beloved Monkeys.

“We really don’t know what the Club would do without him.”

And in his response, it was clear Phil was taken aback with the award and with typical humility he summed up his feelings in one word: “Gobsmacked.”