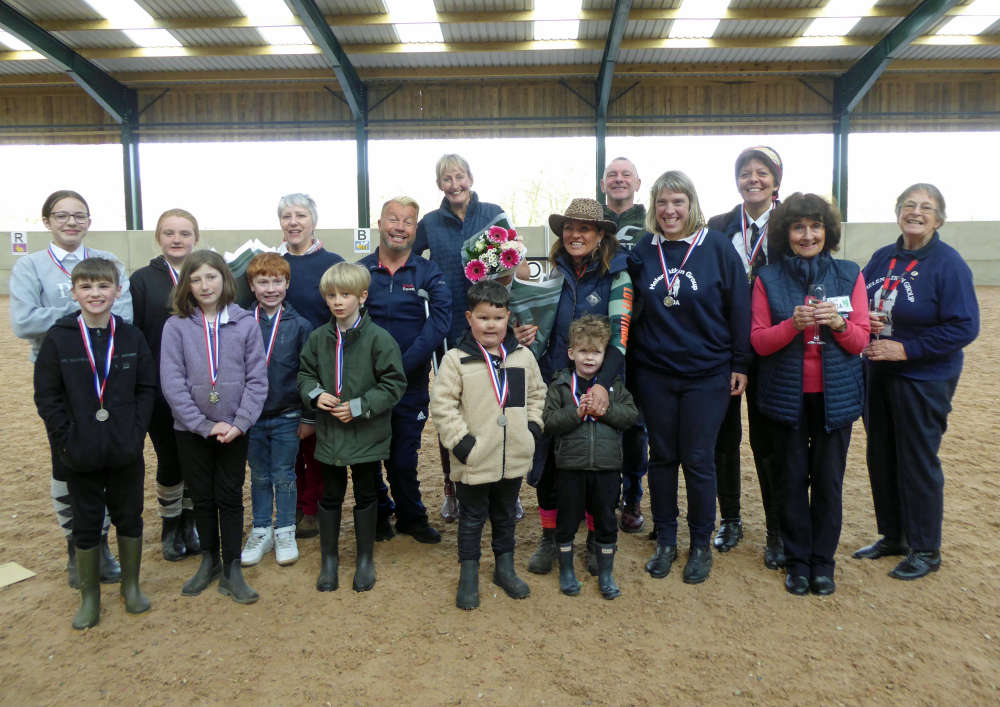 Multi-medal winning Paralympic dressage rider Sir Lee Pearson CBE notched up yet another award to add to his impressive tally when he visited Buxton to officially open a £180,000 covered arena for disabled riders.

For Staffordshire Moorlands-based Lee – a Paralympic Gold medallist on 14 occasions – was presented with a commemorative medal to mark the special event, watched by riders, volunteers, supporters and sponsors of Helen Atkin Group Buxton Riding for the Disabled (RDA) in the Helen Atkin Building* at Buxton Riding School.

Lee - who has struck gold at Paralympic venues across the world and has won many other world and European titles - received the memento from proud rider Lindsay Green, who has represented Helen Atkin Group Buxton RDA and has triumphed in both regional and national RDA competitions in recent years.

Lindsay and other riders from the Helen Atkin Group Buxton RDA, ranging from beginners to more advanced riders, were delighted to have the chance to show off their own equestrian skills to Lee, and to receive congratulations and commemorative medals acknowledging their achievement, from him.

And they were even more excited to discover that Lee had brought along his own home-bred horse Styletta to treat them and invited guests in the 100-strong audience – including Christine Marbrow, Derbyshire County Chair RDA - to a stylish demonstration of the excellence and expertise that has helped him accomplish so much during his highly successful career. He also brought along three of his gold medals for all the riders and guests to see, touch, wear and inspire them to achieve even greater goals, whatever their competence.

Affectionately known as ‘The Godfather’ of British Paralypmic dressage, Lee netted an array of gold, silver and bronze team and individual medals in Sydney, Athens, Beijing, London and Rio between 2000 and 2016. He lives with arthrogryposis multiplex congenita, which causes congenital joint contractures and was awarded his knighthood in 2017 for his sporting accomplishments and charity work.

“RDA is unbelievably important, and today’s event has been phenomenal – it’s fantastic to see how proud everyone involved in Helen Atkin Group Buxton RDA is of this fabulous arena, and how they are reaping the benefits of having such a beautiful and safe space in which to ride,” said Lee.

“Riding is still a huge part of my therapy mentally, and my body wasn’t made to do any other sport. As a professional rider, I feel very honoured and lucky to travel the world and compete with my equine friends.

“Horses are amazing and very humbling animals and will only accept kindness and clear direction, which is an important lesson for children to learn, whatever their differences or level of riding ability. And to combine that with physical and mental therapy – what could be better than that?”

Janine Frost, Chairman of Helen Atkin Group Buxton RDA, added: “We are extremely grateful to Lee for giving up his time to come and officially open our new covered arena, which has been up and running since last October and has transformed the way we run our riding sessions.

“It was a great honour for some of our riders – ranging in age from primary school pupils to adults – to have the opportunity to show him how riding is helping to make a massive difference to their lives. They, our volunteers, riders, sponsors and supporters were even more delighted when he and Styletta presented a short demonstration illustrating exactly why he is one of the top riders in the world.”

Another special guest on the day was former Helen Atkin Group Buxton RDA’s previous Chairman Wendy Howe, who launched and masterminded the original fundraising appeal to build the new covered area to celebrate national RDA’s 50th anniversary in 2019 and said:

“Although at times we felt we would never get there because of the financial target, the challenging ground this building stands on and the planning and legalities it entailed, the driving force was the belief this arena would bring huge benefits to the riders.

“Thanks to the incredible support and encouragement we received from everyone we made it in the end. Riding for the Disabled has a motto ‘It’s what you CAN DO that counts – and you all made it count. I wish the group every success as it grows and hope it manages to keep the same friendly and welcoming ethos it has always had as it achieves new goals in the future.”

Wendy received a well-deserved surprise of her own when Lee presented her with a long service award from national RDA, marking 30 years of volunteering with Helen Atkin Group Buxton RDA.

Added Janine: “Our official opening also provided a welcome opportunity to say a big thank you to all the businesses, organisations, groups and individuals – including Dave and Louise Thompson, owners of Buxton Riding School - who have played such a vital role in making our ambitious dream become a reality. We could not have done it without their vital support and contributions, and are hugely indebted to them all.”