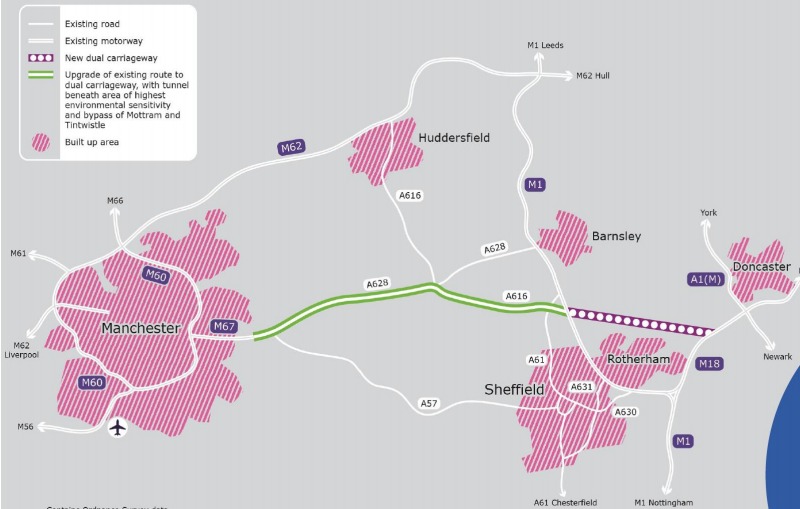 Any future tunnel linking Sheffield to Manchester will likely be shorter and constructed in the 'highest and most difficult terrain' in the Peak District, a new report has said.

A study carried out by Highways England said this option provides better value for money, gives the same strategic benefits to the full-length tunnel and improves access to the Peak District.

The findings also noted that this approach would allow for a ‘phased delivery’ if needed. The cost of the scheme is reported to be in the region of £8bn to £12bn but could rise with inflation.

In July 2015, Highways England were asked to produce a study into the feasibility of a new strategic highway route – including a tunnel under the Pennines – connecting the M1 at Sheffield and M60 at Manchester.

Previous studies have shown that journeys between Sheffield and Manchester are amongst the lowest between two core cities due to the poor road and rail connectivity across the Pennines.

A new route also has the potential to ‘promote growth in the City Region’ and improve capacity and resilience of the highway network as well.

The scheme will also aim to reduce the impact of traffic in the Peak District National Park.

The length of the project was expected to be around 25 miles, designed to dual, two-lane all-purpose standards and have an operating speed of at least 60 mph.

This project is still in the very early stages and the government has only committed funding for its early development, not the whole delivery.

Data shows that an improved Trans-Pennine route could roughly double the existing usage on the A628, initially attracting around 35,000 vehicles a day.

Anticipated journey time reductions from the M1 to the M60 ‘could be around 30 minutes’.

Sheffield City Region bosses have said that an Trans-Pennine link needs to include new – or significantly approved – rail options as well as new road.

The whole scheme, including the significant length of tunnel and wider connectivity elements, needs to be constructed, not just elements of it, bosses added.

David Whitley, senior transport programme manager at Sheffield City Region, said:  “Alternative corridors and tunnel options were considered and sifted out due to cost and deliverability.

“Doing nothing is an alternative option but not one supported by the Peak District National Park and road links between two key regions would remain poor, adversely impacting a collection of things and constraining the Northern Powerhouse economy.

“The need for any Trans-Pennine scheme to be built to an exemplar environmental standard that delivers environmental enhancement as well as limiting the negative effects of climate change.”

High Peak MP Robert Largan commented: “I’ve been campaigning hard for the Mottram Bypass & Glossop Spur which are badly needed to help reduce the appalling traffic problems in the area.

“But I’ve always said that in the long term, we need an even more comprehensive and ambitious solution, especially to help reduce traffic in Tintwistle.

“One option would be the Trans-Pennine Tunnel. It would be very expensive and difficult to deliver but I’m encouraged that a study has now shown the tunnel would reduce journey times by 30 minutes. The benefits to local residents would be huge. It would also have significant benefits for the whole country, improving the transport links between Sheffield and Manchester.

“I’ll be examining the detail of the report more closely and will continue to work on a cross-party basis to fight for investment in our transport infrastructure. Doing nothing is not an option.“