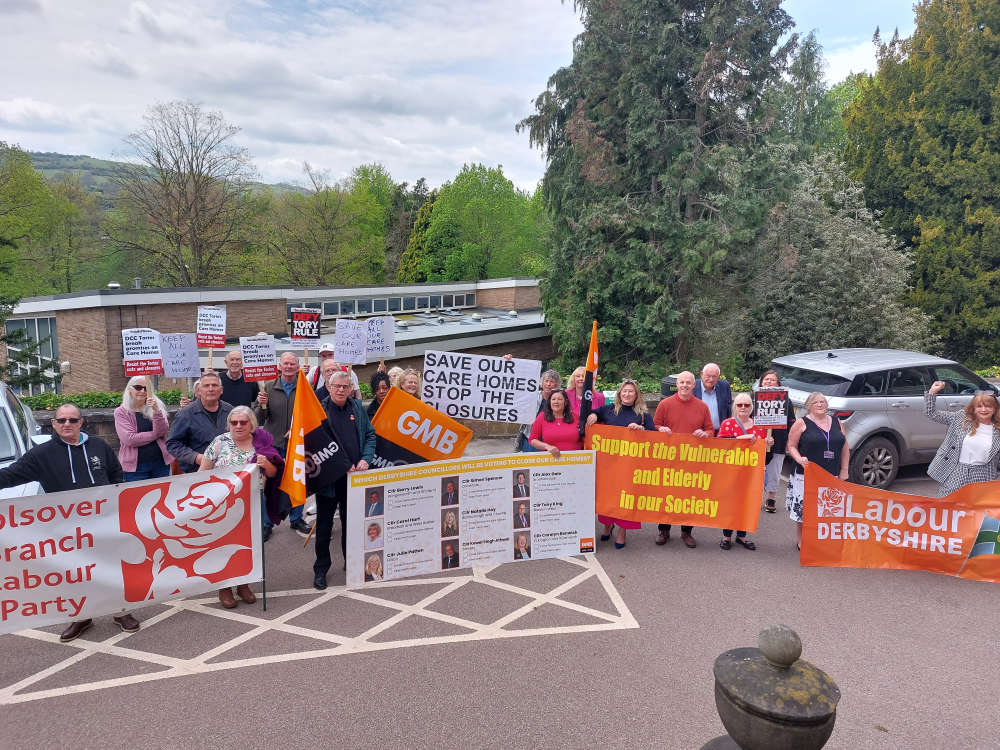 Derbyshire County Council's Tory leadership used its majority to crush opposition attempts to reverse a decision to close seven care homes in a final stand-off on Wednesday (25 May).

Tempers ran high at the extraordinary meeting called by Labour, Lib Dem and Green Party members as each side fought both for and against the call made by Cabinet on 5 May.

All Conservative members who were present at the meeting voted against the motion put forward by Labour to reverse the decision – barring Councillor Nigel Gourlay, Tory member for Chapel, who refused to toe the party line and joined opposition members in voting for the motion.

In presenting the motion, Labour leader Councillor Joan Dixon referred again to the Derbyshire Conservative Party’s manifesto pledge that no care home would close without replacement provision, as well as Councillor Natalie Hoy’s campaign prior to becoming Cabinet Member for Adult Care to save her local care home East Clune, which will now be closed.

Coun Dixon commented: “People are now saying very clearly that they no longer trust Derbyshire County Council, which is not surprising when election promises are broken and they try to wriggle out of their commitments to the electorate.”

Claiming there was a ‘real and tangible distrust’ of the Conservative administration, she said many people felt the care homes consultation was a ‘tick box exercise’.

Coun Hoy responded by listing five homes that had been closed by the Labour party during its administration between 2013 and 2017.

She said: “A home should be a safe environment and this authority only wants accommodation of the highest quality and standards for our residents.

“Before I was elected, I did campaign to save these homes but as cabinet member I have more insight into the state of the homes.”

Coun Hoy went onto list the issues previously blamed for the homes’ unsuitability, including lack of ensuite facilities, bad wiring and rooms not big enough for equipment.

Lib Dem leader Councillor Ed Fordham referred to the results of the consultation, stating: “There is no evidence whatsoever that any of the people that responded to this consultation say they want to be cared for in their own homes.”

He referred to the previous cabinet meeting, in which he had asked for reassurance over the future of the remaining 11 care homes and Coun Hoy declined to answer, calling him ‘a headliner with ambitions of Westminster’.

Coun Fordham stated: “You’ve stolen all the headlines on this topic Coun Hoy.”

He listed some of the 65 elderly residents, who he said were at risk of ‘death or trauma’ as a result of the closures.

“These are the people actually affected and it’s disingenuous for you to claim that those of us who oppose this decision are chasing headlines that you yourself have created,” Coun Fordham concluded.

Leader Councillor Barry Lewis argued that new care homes in the same state of disrepair would not be allowed by the Care Quality Commission (CQC).

He told opposition members the meeting was a ‘waste of time’ and a cost to the taxpayer.

Coun Fordham withdraw the Lib Dem and Green Party motion to regret the decision to close the care homes.

Commenting after the meeting, Coun Gourlay gave thanks to High Peak constituents who signed petitions to oppose the closure of Goyt Valley House, stating they would be ‘disappointed at the outcome of the process’.

He continued: “I am pleased that additional funding has been found by DCC to help the residents of Goyt Valley House move to their new homes.

“In the coming years, I hope that a replacement care home will be built within the High Peak, so that our elderly neighbours can live their final years in a familiar place.”