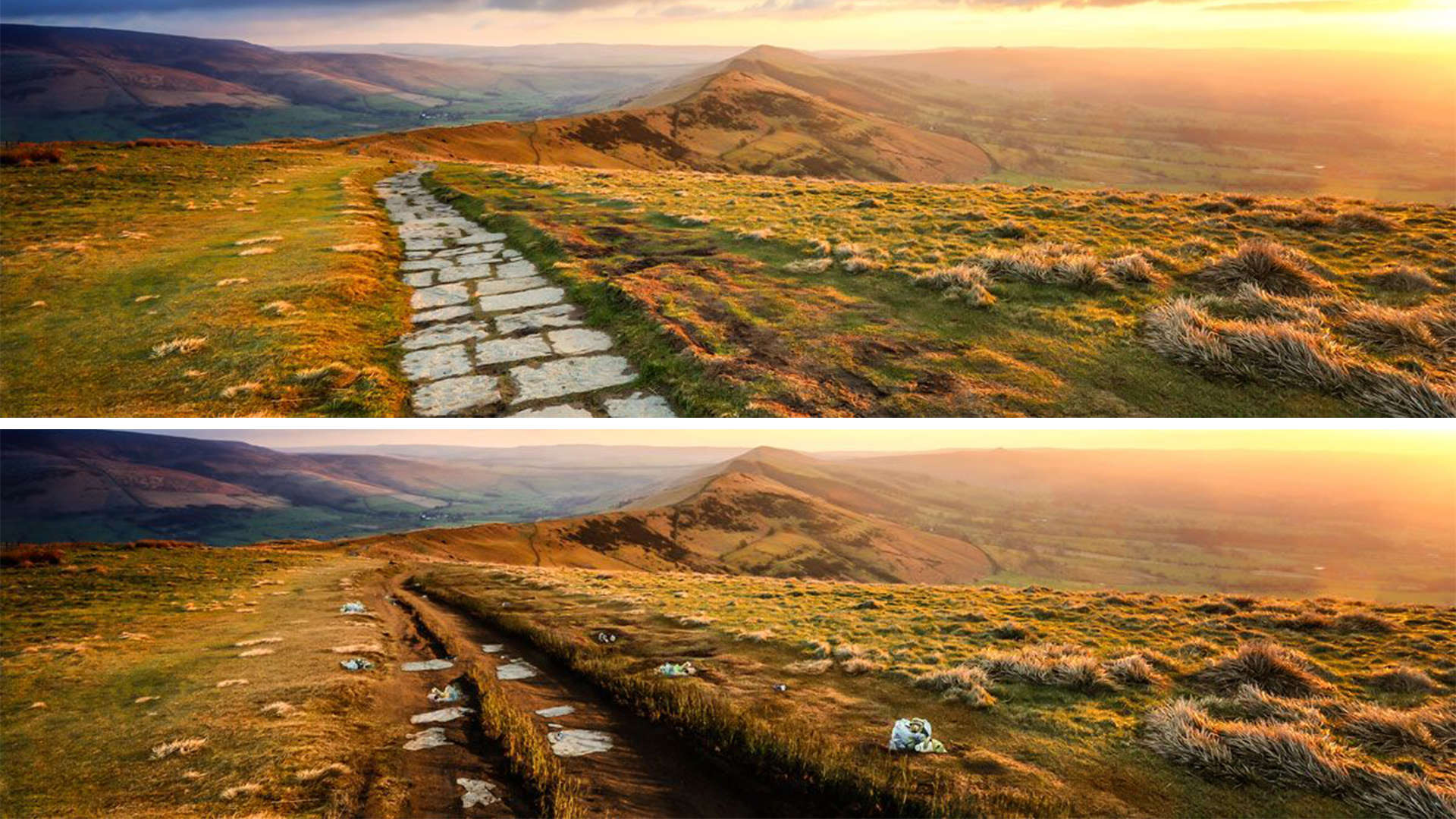 Before (top) and after (below) shots of how heavy footfall could widen and damage the footpath at The Great Ridge, which leads up to Mam Tor.

New images have been released which show the stark future of the Peak District if current walking behaviours continue, with footpath erosion and mass littering having a massive impact on our favourite natural spaces.

Rohan, the outdoor and travel clothing company, is launching a range of initiatives, such as research into the nation’s walking habits, to help raise awareness of and protect the areas that the public know and love.

The company used a variety of data sources, such as visitor numbers and environmental offences, to identify the national parks most in need of protection, and then looked ahead 50 years to see what they could look like if no action is taken.

The Peak District, the UK’s oldest national park, tops the list, with the latest data showing a staggering 178 per cent increase in visitors between 2016 and 2019.

The Great Ridge, which leads up to Mam Tor, is one of its most popular routes, and artists have visualised how heavy footfall could widen and damage the footpath.

Joanne Backshall, Programme Manager at Fix the Fells, explains what footpath erosion is, how people can help to minimise it and what could happen to the UK’s favourite routes in the next 50 years if they aren’t protected.

She said: “Footpath erosion is where trampling has killed vegetation and exposed bare soil and loose stone, which gets washed away to create unsightly gullies and scars in the landscape. It’s caused by a combination of people and rainwater, and the severity is largely determined by the number of walkers and how many stray from the designated path.

“If no action is taken to look after paths and repair damage, then erosion will spread - more vegetation will be trampled and die, more soil and stone will be exposed and washed away, and ultimately more of our stunning mountain tops, ridges and main routes will become gullied and ugly.”

Giles Polito, Marketing Director at Rohan, said: “We’re incredibly fortunate in the UK to have such stunning national parks on our doorstep and it’s fantastic that so many people are getting out to enjoy them.

“Since our launch in 1972, we’ve always encouraged the nation to head outside and explore these spaces, but it’s also important that we do everything we can to protect them, particularly those with high footfall, so that future generations can appreciate them as much as we do.

“We all have a joint responsibility to look after the British countryside and listening to and supporting charities like Fix the Fells is a great way to play your part.”