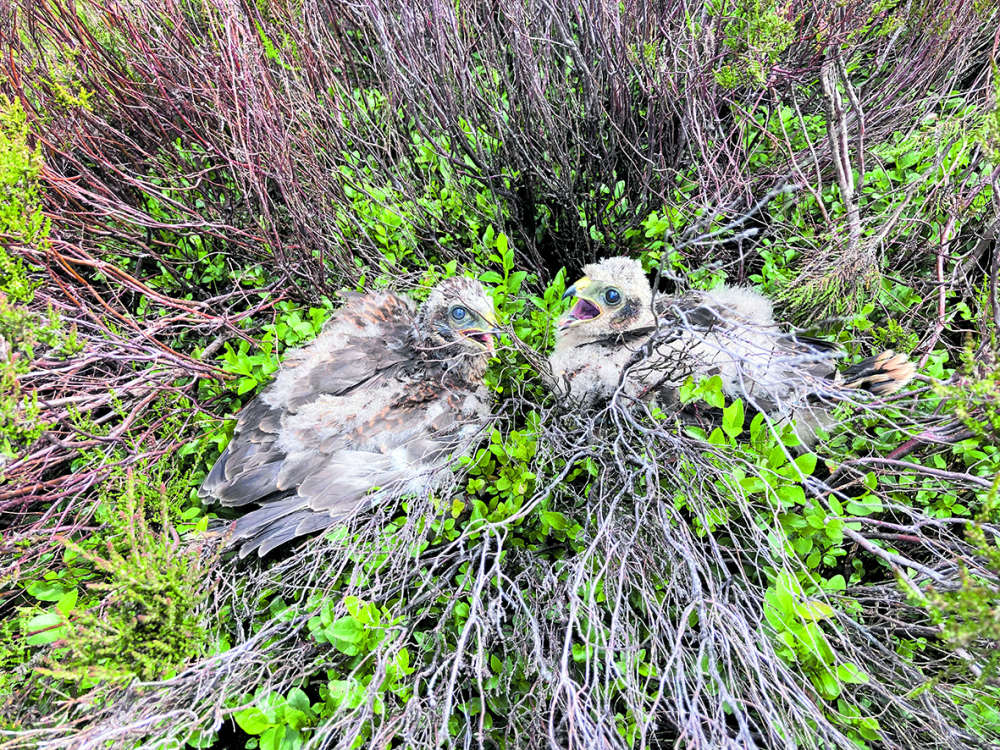 A mission to protect one of Britain's most threatened birds has paid off with the recent discovery of a nest on the National Trust owned High Peak moors.

The location of the hen harrier’s nest remains a closely guarded secret and the find is seen as a major conservation success.

Hen harriers are famed for the adult’s mesmerising and dramatic ‘sky dance’, which the male performs as it seeks to attract a female. Trust general manager Jon Stewart, who has worked closely with the RSPB and the Peak District Raptor Monitoring Group to support the monitoring and satellite tagging of the young chicks, says the discovery is ‘something to celebrate’.

He said: “The hen harrier has been one of the most persecuted birds of prey in Britain for many years and we have set out on a mission to work with others to create the conditions for the harrier and other birds of prey to thrive once again in the uplands.

“Healthy bird of prey populations are at the heart of the vision we have for our land in the High Peak and in recent years the results are overall encouraging.

“We hope this will be a beacon of light for improving the fate of our birds of prey and providing the healthy natural environment that so many people care about and want to see.”

In 2013 the National Trust published its High Peak Moors Vision, which put at its heart restoring wildlife, including birds of prey, and involving people in the care of the moors.

The conservation charity leases much of its High Peak moorland for grouse shooting and all shooting tenants have signed up to actively support the vision.

Over the last few years as well as the hen harrier, there has been breeding success for other species in and around the National Trust’s moors such as the peregrine falcon, merlin, buzzard, goshawk and short-eared owl.

Jon added: “The National Trust has worked with our partners, including the Peak District Raptor Monitoring Group, and our tenants to give the birds the best chance of success. We have also worked with the RSPB and specialists on satellite tagging the young chicks so that we can monitor movements and learn more to inform the conservation of this very special bird. I hugely appreciate the commitment and efforts of everyone involved and the care taken to avoid unnecessary disturbance.”

Over the coming months The Trust and RSPB plan to share the progress and journey of one of the new fledglings, named Maia, that has been satellite tagged.

Howard Jones, from the RSPB, said: “We are delighted to hear that Maia and her siblings have successfully fledged the nest in the Peak District. It is always with a mixture of joy and trepidation that we watch young hen harriers like these venture out into the wider world, as the threat of them being illegally killed once they leave the nest sadly remains.

“Satellite tagging continues to prove persecution to be the number one factor suppressing the hen harrier population in England.”

In ancient Greek mythology, Maia is the Earth goddess of springtime. She is also one of the Seven Sisters, who make up the constellation of the Pleiades.

The trust and the RSPB hope Maia the hen harrier will be a star too.