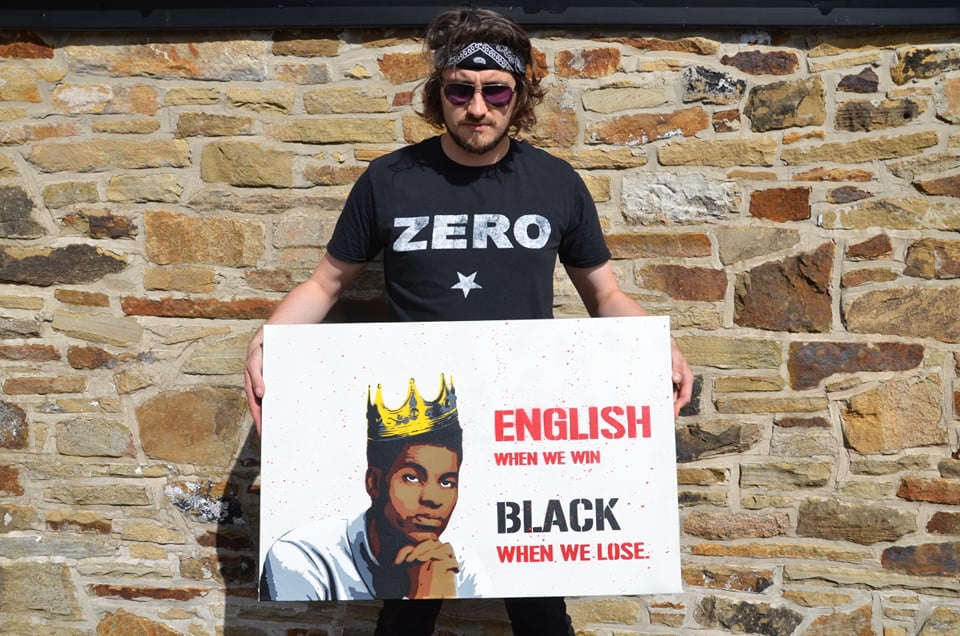 A talented artist from Hadfield has created an incredible canvas to show solidarity with England footballer Marcus Rashford, who was subjected to racial abuse following the Euro 2020 final.

The Manchester United player has become a national treasure, thanks to his tireless campaigning on behalf of the most disadvantaged kids in the UK.

The 23-year-old was targeted with vile racist comments, along with team-mates Jadon Sancho and Bukayo Saka, after they missed penalties in the shoot-out as England lost to Italy at Wembley Stadium last Sunday (11 July).

A mural created in Withington in South Manchester, close to Wythenshawe where Marcus is from, was also defaced in the aftermath of the match. But street artist Akse - who created the artwork - has since repaired the damage, while hundreds of heartfelt notes have also been left on the portrait.

'Deggy' (James Degnen), was appalled to wake up the morning after the final to headlines about racial abuse aimed at the three young footballers and wanted to show his support for Rashford in particular.

The 28-year-old, who is a Manchester City fan, painted a portrait depicting the striker wearing a crown, accompanied with a short but powerful message: 'English when we win, Black when we lose'.

"As an artist, you have the freedom to create a message from a blank canvas but very few create a statement," said Deggy, who has always lived in the Glossopdale area and is also a bass guitarist for Manchester-based band Gorilla Riot.

"A mixed bag of emotions took over me when I saw what had happened, mainly rage and sadness, and the question why would some people stoop this low after someone has done so much good in the world? It's absolutely sickening.

"Marcus is a true inspiration for all. I have so much admiration and respect for him and if I could only do a small amount of what he has done to help people, I would die a happy man.

"The fact that these three young lads [Rashford, Saka and Sancho] have been called rotten and spat on from 'so-called fans' makes me sick. Far too much is being said and not enough is being done, we can't just keep talking about this every time racial abuse happens.

"This [artwork] is my way of making a point and showing solidarity with Marcus. This is a statement against racism. I had to have my say. I feel sad that I've had to do it but if raises awareness, then I'm happy to be a messenger. I think I only got an hour's sleep on Monday night to soldier on getting the painting finished." 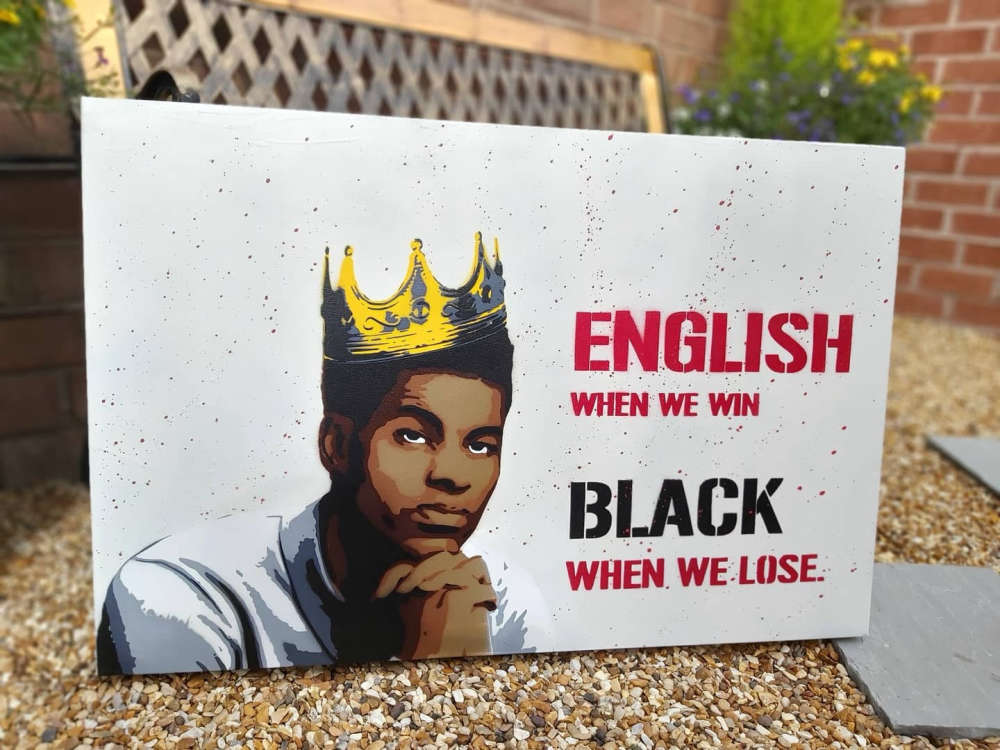 MASTERPIECE OF MARCUS: A closer look at Deggy's design

Deggy - who has around a decade of experience as an artist - had already painted a tester picture of Rashford a few weeks ago, which he'd planned to save for an art exhibition he's holding in Manchester next year, but felt the time was right to adapt and reveal it.

"I can't help but admire Marcus on so many levels - he has done nothing but incredible things to help the country and raise awareness for food poverty over the last few years and he is only 23 years old.

"I just thought it would be cool to put the crown on Marcus and I painted him in a white England kit, rather than his red United kit. If you look at the picture, you've got a sense of achievement there - you get the message straight away that this guy is a king.

"It says something coming from a Man City fan too. You have to respect people on a personal level and I have all the respect in the world for Marcus.

"I will share more details about the exhibition in due course but I plan on painting this exact piece 10 times bigger than it already is here. I had planned to save this one, which is around A2 in size, but I thought I'd put it online to share as a message of support. The response to it has been great."

Deggy also said he is open to the idea of using the bigger painting he plans to produce as a way of raising money to support Marcus's charitable causes as well as local food banks.

"If there is an opportunity to do that, I would be all for it," he said.

"If a decent offer came in for the existing piece too, I would definitely sell it and donate all of the proceeds to the charity but my initial goal is to reproduce it into a bigger piece and create more of a statement."

Deggy also attracted attention with his artwork last year after creating a unique picture of 'Oliver Twist' with a begging bowl and High Peak MP Robert Largan, which raised hundreds of pounds for Glossopdale Foodbank.