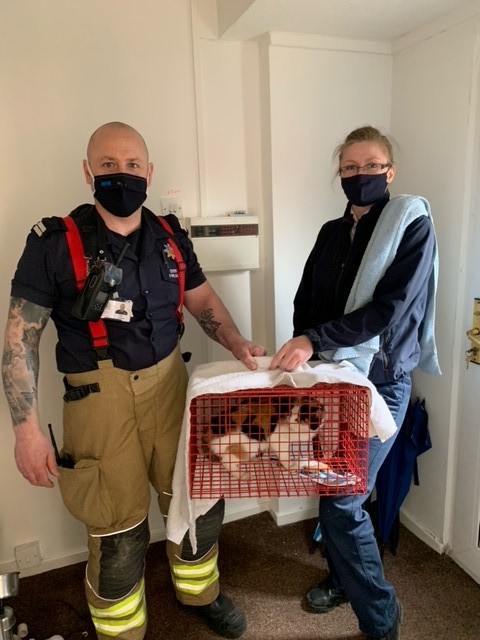 A cat which was stuck in a wall cavity of a Hadfield house for three weeks was saved by the RSPCA and the fire service during a purr-fect rescue.

The owners of Molly were moving out of their home in Chapel Lane last month and, when they couldn’t find their timid house cat, they assumed she was hiding somewhere in the property.

They returned to the house every day for a week leaving food out. On the first day, the food had gone and it was assumed she was still somewhere in the house - but attempts to locate her failed.

After that, there was no sign of Molly despite the new owner Glyn Stafford leaving food and milk out on a daily basis in the kitchen area to try to entice her from her hiding spot.

After days of doing this, he and Molly’s owners assumed she must have run away outside while Glyn had his door open as he was carrying out work on the house.

But on Wednesday (14 April) he heard a meowing sound and realised she was stuck in the wall cavity near the kitchen ceiling.

He contacted the RSPCA and inspector Jenny Bethel was sent to the scene.

She realised Molly must have squeezed through a gap around a waste pipe in the kitchen and had climbed up. 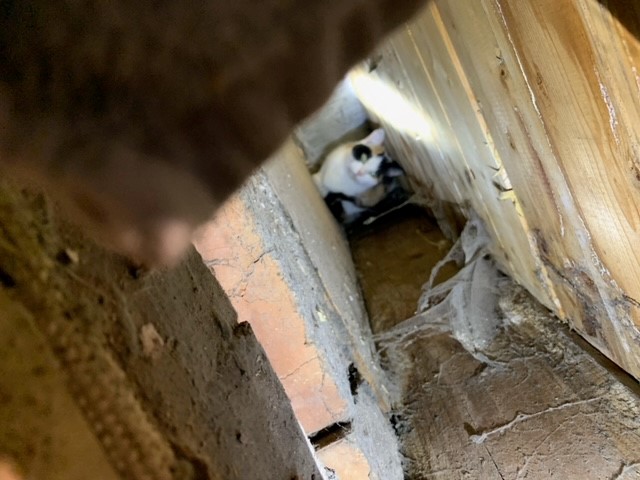 She had then climbed into a ledge which was above the kitchen ceiling but below the bathroom floor.

Jenny shone her torch into the gap and could see Molly’s head, but she could not see a way to get her out. She called Derbyshire Fire and Rescue for assistance and a team from Glossop attended.

The crew decided they would have to remove some floorboards from the bathroom to get to Molly - which Glyn happily agreed to.

They got to work and one of the crew members was able to safely grab Molly - who was slightly under the bath - and they then handed her over to Jenny.

She said: “She must have been terrified spending all that time trapped in such a tight spot.

“She looked quite skinny so I took her to a local vet and fortunately she was found to be healthy but in need of feeding up.

“The vets were then able to contact her grateful owner to tell them that Molly was safe and available to be collected.

“The fire service were great at assisting in this rescue and I am also grateful to Glyn for alerting us to the incident and for allowing us to pull up the bathroom floorboards to save Molly.”

Glyn said: “I was quite surprised when I heard the miaow after all that time and called the RSPCA straight away.

“I have had cats myself so I really wanted her to get out and be safe.

“The floorboards had to come up to get her, but the damage can be repaired. The cat’s life is what mattered.

“The RSPCA and fire service did a great job and I was so relieved to see Molly looking so well really even though she hadn’t eaten or had any water for such a long period of time.”