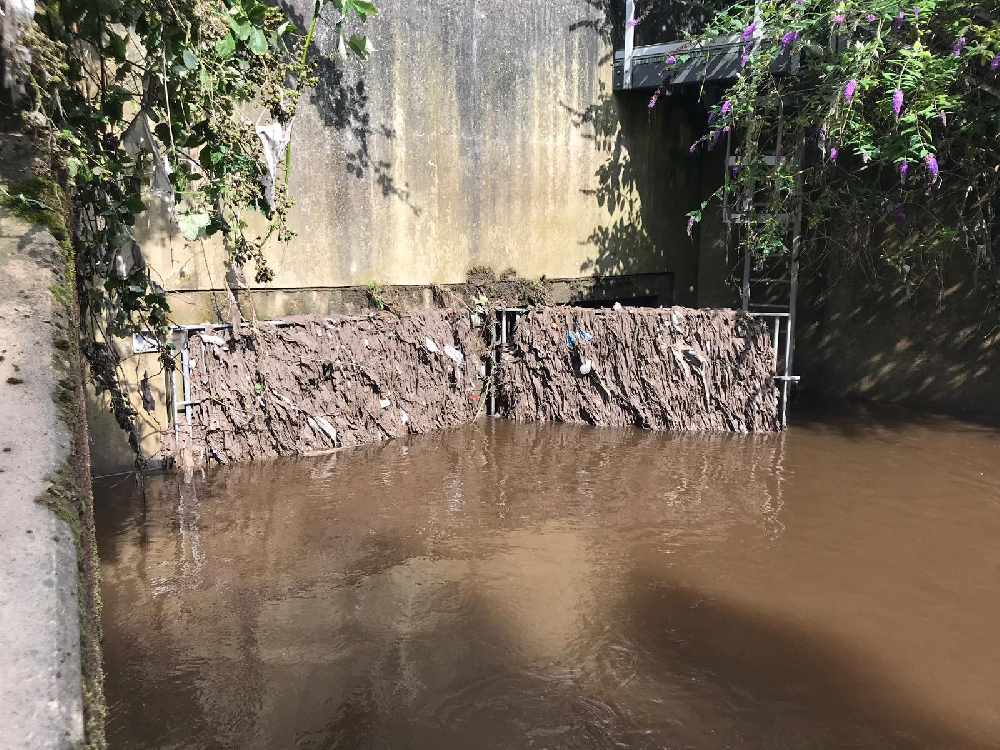 This disgusting mess is the result of people in Greater Manchester flushing wet-wipes down the loo - and experts say it’s damaging our environment.

Recent flooding has shone a light on the huge numbers of wet wipes that are polluting the waterways around the region.

The overflow screen was burst open by floodwater at the beginning of August as around a months’ worth of rain fell in just 24 hours.

Prof Woodward is urging people not to flush wet wipes, and if possible stop using them completely.

He explained that the plastic in wet wipes can enter the food chain if they are flushed into sewers and end up in rivers or the ocean.

“When we have heavy rain and flooding, the sewage system and waste water treatment plants are overwhelmed and waste is then diverted, untreated, directly into our rivers – raw sewage, wet wipes, condoms, tampons etc,” Prof Woodward said.

“Wet wipes can account for 90pc of the material causing sewer blockages.

“They are full of synthetic fibres – the wipes break down to form microplastic fibres in rivers and can be washed out to sea.”

The screen is near to where the Tame merges with the Goyt, at the rear of the Tesco superstore in Stockport, and the ‘gross’ mess had to be cleaned by hand by United Utilities engineers.

The River Tame has already been revealed as the most plastic-polluted waterway in the world due to the ‘astronomical’ levels of microplastics littering its riverbeds.

Friends of the Earth say microplastics should now be considered as an ’emergent contaminant’ – and have called for the routine monitoring of all UK waters.

Prof Woodward, along with colleagues in the department of geography, are investigating the pollution this summer.

He told the Local Democracy Reporting Service there are likely to be ‘multiple sources’ of different kinds of local microplastic contamination.

“Industrial sources and waste water treatment effluents are likely to be significant,” he said.

“The wet wipes issue is a distinctive problem that can be solved by people not flushing them down the toilet.

“This is still clearly a widespread practice and better communication is needed.

“Then they breakdown into tiny synthetic fibres that can be ingested by aquatic fauna.

“On every level they damage the environment.”

The problems wet wipes can cause has gained more attention after the discovery of ‘fatbergs’ across the UK – where flushed wipes mix with oil and grease to form huge congealed masses in sewers.

Each year United Utilities say they tackle on average 28,000 blockages in the sewers which serve the north west, costing around £10 million.

A United Utilities spokesperson said: “The picture clearly shows lots of wipes caught in the outfall grille from the combined sewer overflow.

“This is further evidence of the increased levels of non-flushable products such as wet wipes entering the sewer network.

“Keeping sewers flowing and free from blockages is an ever increasing challenge and this particular build-up, involved a team having to clear the grille by hand.”

The company added that its workers have now successfully cleared the grill at the sewer overflow.

“As much as we live in a ‘disposable age’, it’s vital that we all think before we flush and pour items away, because many items currently entering the sewer system don’t just disappear and dissolve,” the UU spokesperson added.

“Most of the blockages in the sewer network are a result of non-flushable items being disposed of down the toilet.”