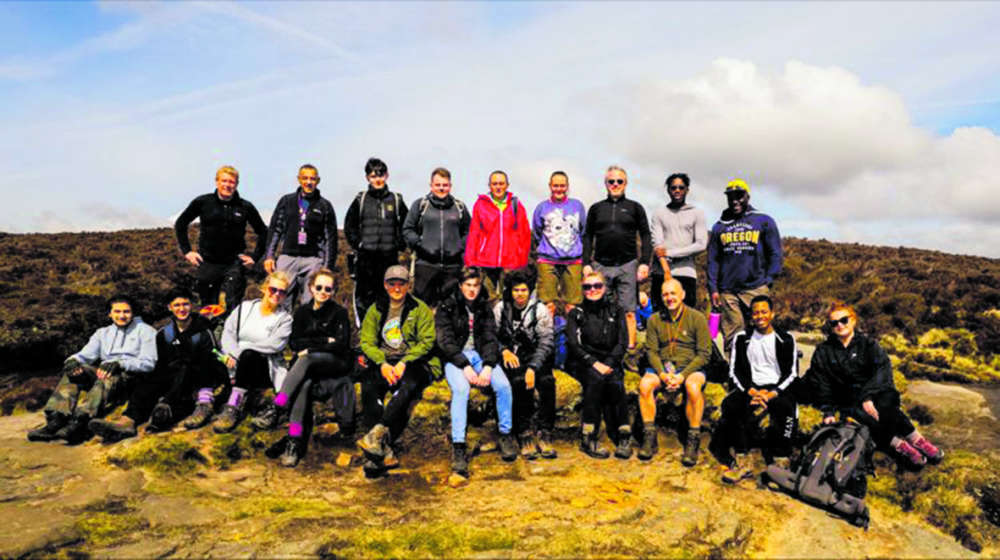 MENTORING: Freshwalks Fresh Futures on Kinder in April this year.

Tune in from 9pm every Sunday on Tameside Radio 103.6FM to catch up with Michael Taylor and Neil Summers. Here's their latest column for the Tameside Reporter...

Kinder Scout, the plateau that dominates the Dark Peak to the east of Greater Manchester, represents so much of what I have come to believe in; connecting with and respecting nature, the universal opportunity we all have to explore the challenges of the great outdoors, and something uniquely connected to the traditions of the place I call home.

One of my sons lives over the hill in Rowarth and when I drive over to see him - or he drives to me - we get an incredible view of the plateau in all kinds of light. It’s like being able to view one of your favourite paintings again and again. Even when storm clouds loom over it, or it is enveloped in darkness.

For me, Kinder is also the spiritual home of Freshwalks, the walking community that I was loosely involved in setting up in 2013 and which my friend Michael Di Paola has established as simply the best networking community I’ve ever had the privilege to be involved in.

I adore the Lake District, I am awestruck by the Cairngorms in Scotland, Snowdonia has a magical magnetism. But Kinder and the Dark Peak feel like they are ours. It’s a different emotional connection.

When walking up it, I love its unpredictability.

My friend John and I set off one sunny August morning last year from the car park at Hayfield quarry where there stands a plaque to the heroes of the Kinder trespass in 1932.

We were booted up and ready for anything in our walking shorts and also slapped on the factor 30 as the sun shone, imagining a still stroll around its eerie lunar edges.

An hour later we were planning a hasty retreat down Williams Clough, soaked to the bone, as lightning crackled in a dark sky and the rains lashed down on us.

By the time we got back to Hayfield it was cracking the flags again, humbled that Kinder had once again laughed at our plans and reminded us how futile it is to speak of ‘conquering’ mountains and hills.

I was at a low ebb at the time. That challenge, the conversations we had up there that day have sustained me for a long time. I think of so many other days, other friends, other conversations, that have had a similar effect. Sometimes about music, by the way.

Shortly after my jaunt with John, my wife Rachel joined a sunset walk which properly gave her the confidence to make profound lifestyle and fitness choices.

She’s now edging ahead of me on the leaderboard for miles walked on Freshwalks this year.

And so to our latest initiative. I volunteered to be a mentor on the Freshwalks Fresh Futures initiative with Manchester City Council’s Our Year programme, to help young people see what I’ve experienced.

As potential mentors we just brought our open hearts, a curiosity and our passion for the outdoors.

The young people brought ideas and energy, but also bonded with each other. It’s taken me a lifetime to find this way of recharging and connecting.

Hopefully this day has made an early impact on these guys, though some are already well on their way to their Duke of Edinburgh Awards.

So here’s to Kinder, whether in the morning sunrise, through hail and wind, or as the sun sets on another day, it truly was worth fighting for.