Legacy of pirate radio plays on 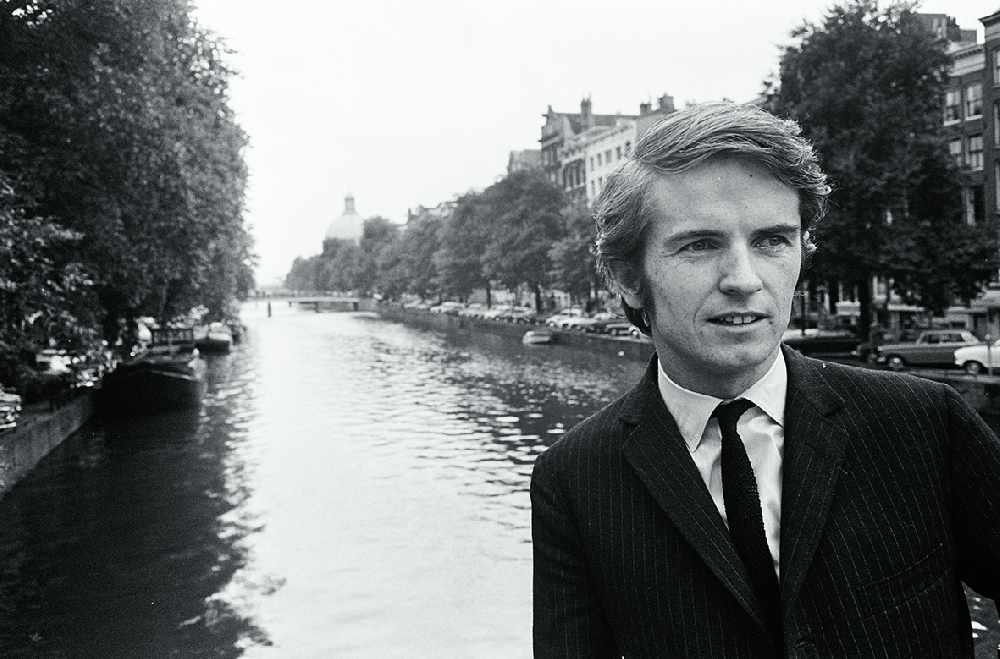 Back in the '60s, Ashton authors and historians Philip and David Williams were avid listeners to the pirate radio stations and especially Radio Caroline North – anchored off the Isle of Man.

When the government planned to outlaw them, a national organisation was formed – The Free Radio Association or FRA (Independent Radio Association may have been understood better but IRA was obviously not practical). In Ashton, they formed the Ashton and District Branch (covering what is today Tameside).

So, it was with a touch of sadness that they learned of the death earlier this year of Ronan O’Rahilly (pictured) - founder of Radio Caroline and a man who influenced the future of British broadcasting and music - a legacy which continues to play out across the airwaves even to this day...

It was with sadness that we learned of the death of Ronan O’Rahilly back in April. Ronan was the man responsible for transforming British radio broadcasting.

In the early 1960s the Irish businessman was running ‘The Scene’ club in Soho.

He was also manager of several musicians including Georgie Fame and Alex Korner. He even managed the one time only James Bond actor George Lazenby.

Radio in Britain at that time was monopolised by the BBC whose musical output did not appeal to the younger generation.

The BBC’s schedules on the ‘Light Programme’ offered programmes from Billy Cotton, Edmundo Ros, Joe Loss and the like.

Their main contribution to the younger generation came from the half-hour show ‘Easy Beat’ or ‘Pick of the Pops’.

The only alternative to the BBC came from Radio Luxembourg who broadcast to Britain during the evenings.

As their programmes were sponsored by the major record labels like Decca and EMI there was no room for any independent labels or up and coming artistes.

O’Rahilly unable to obtain air play on the BBC or Luxembourg for Georgie Fame, decided to start his own radio station.

Having purchased an old passenger ferry the MV Frederica for £20,000 he had it fitted out as a floating radio station at his father’s ship yard at Greenore, in the Republic of Ireland. It sailed out in March 1964 and anchored in international waters off the Essex coast near Felixstowe.

Broadcasts began on Easter Sunday, with Simon Dee’s announcement: “Hello everybody, this is Radio Caroline broadcasting on 199, your all-day music station.”

The first track played was the Rolling Stones ‘Not Fade Away’ and so, commercial radio had arrived. In its first few weeks of transmission Radio Caroline had a daily audience of more than seven million listeners.

The young and zestful disc-jockeys on the new arrival appealed to the youth of Britain, they came across the airwaves as being natural and human, and were people to whom their audience could relate.

They were, in fact, everything the BBC was not. The BBC’s position wasn’t helped by an agreement it had with the Musicians Union, which restricted the amount of recorded material it could play. Unaffected by this so-called “needle time”, Radio Caroline played countless records from the smaller record companies and, in so doing, helped to develop the modern sound of British pop music, all culminating in the Swinging Sixties.

By 1966, the British Isles was ringed by a further nine such pirate radio stations, who between them had most of the country covered with their non-stop broadcasting, and an estimated audience of 40 million.

For many people who look back to these times with nostalgia, the names Radio England, Radio Caroline, Radio 390 and Radio London are synonymous with Carnaby Street, mini-skirts, The Beatles and a period when everything was either fab or groovy.

Disc jockeys associated with these stations became household names and many were to find lasting fame in the years ahead. The likes of John Peel, Tony Blackburn and Kenny Everett all started their careers on the aptly-termed “floating juke-boxes”.

After only two months of broadcasting from the Frederica, now renamed the MV Caroline, the station weighed anchor to sail around the coast of Britain, pumping out her music as she went.

On course for a new home off Ramsey Bay in the Isle of Man, it now took on the name Radio Caroline North, leaving behind in its place the Mi Amigo, acquired through a merger with its rival, Radio Atlanta. The MV Mi Amigo now broadcast as Radio Caroline South.

A familiar name to many readers will be that of Oldham-born Tony Prince, who after working at the Top Rank Suite at the corner of Union Street and King Street, Oldham became one of Radio Caroline North’s most popular disc jockeys.

Tony had not been out on the ship long when the programme director gave him the sack, for apparently not having the right kind of voice for radio.

This decision angered the many fans Tony had amassed in the short time his shows had been running, and it was at their request that Ronan O’Rahilly, quickly reinstated the pint-sized, zany and self-styled “Royal Ruler”.

Dave Lee Travis was another northern club disc jockey who found he had a talent that suited Caroline’s listeners.

By 1966 Caroline’s combined listenership was estimated at 25 to 30 million and in the summer of that year holidaymakers in almost every British seaside resort were sunning themselves as the happy sounds of the Beach Boys and the like filled the air.

Pleasure boats sailed around the stations, with the holiday revellers cheering and waving wildly at the disc jockeys, who frequently came out on deck to see their public.

Storm clouds, however, had been gathering, as protests in the House of Commons were increasing.

The arrival of these radio ships had incensed the Government of the day. It announced that some pirate stations, using frequencies which they had not been allocated, were causing interference to foreign legal stations and to emergency services.

With the Government preparing to introduce a law which would bring an end to the ‘Pirate’ stations a national organisation was formed to oppose the ‘Government’s proposed ‘Marine Offences Act’.

Locally, Philip Williams was the founding member of the Ashton & District Free Radio Association (Tameside at this time had not yet been formed).

This was a branch of the national movement which supported offshore radio stations - the likes of ‘Radio Caroline’ and also lobbied for the legalisation of commercial radio in the UK - and attracted hundreds of local members.

After a stormy passage through Parliament, the Marine, etc., Broadcasting (Offences) Act finally reached the statute books. Under this bill, it became illegal for British citizens to work on or advertise with the stations, or to supply them with goods of any description or to aid them in anyway whatsoever.

With the death knell well and truly sounded, most of the stations closed down on August 14,1967, leaving only the defiant voice of Radio Caroline to compete with the new-look ‘Radio 1’ offering from the BBC. Staffed ironically by many ex-pirates, this was the BBC’s version of a format so successfully set by the now-departed offshore stations.

Over the oncoming years Caroline continued to broadcast though there were periods when things conspired against them to temporarily force them off the air.

With the loss of their original ships - the Mi Amigo sank in a gale in 1980 - the station acquired their third ship the Ross Revenge, from where broadcasts continued until another change in the law forced closure in 1990.

While off air in 1991 the silent Ross Revenge ran aground and was impounded. It was taken into various UK docks until it was released a number of years ago on condition it did not leave UK waters to broadcast again.

However, Radio Caroline did commence broadcasting again firstly with satellite broadcasts and later via internet streaming.

After many years of petitions by the countless Radio Caroline enthusiasts, DJs and even some politicians Radio Caroline was granted a licence to broadcast both on the internet and on the Medium band on 648 metres which can be heard clearly in the East Anglia areas.

Their licence, granted by Ofcom the UK’s communications regulator came in 2017, exactly 50 years after the passing of the Marine Broadcasting Offences Act.

It is perhaps ironic that both Radio Caroline’s current frequency and their aerial masts were formerly those used by the BBC World Service.

Also, in 2017 Caroline’s radio ship the Ross Revenge was added to the National Historic Ships register. 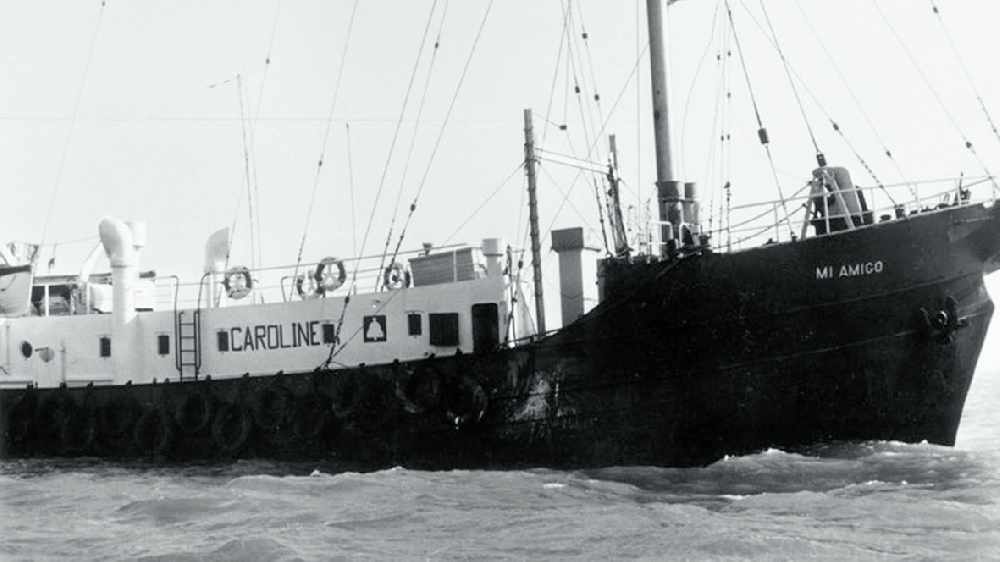 Today thanks to an avid bunch of volunteers the ship is kept in good condition at its mooring on the River Blackwater near Bradwell, Essex.

Apart from today’s lockdown situation there are, just like the 1960s, regular pleasure trips bookable to visit the boat. Once a month the ship is back in use as a radio station when it links up with Manx Radio on the Isle of Man to broadcast on their AM frequency and internet stream as Radio Caroline North.

One volunteer who regularly works on the maintenance of the ship, and who in his youth was a member of the Ashton Free Radio Association, is retired Mossley resident Steve Swallow.

Steve recalled: “As a teenager I remember very well the days of pirate radio and being a very keen listener in the 1960s mainly Radio Caroline.

“I also became an active member of the Ashton-under-Lyne branch of the Free Radio Association, and along with Philip Williams and his brother David, we in various ways and at many events encouraged people to join our fight to maintain Radio Caroline and promote the future of commercial radio.

“Today, the ship is constantly maintained by ‘The Caroline Restoration and Maintenance Crew’, which I am proud to be a part of.

“At least once a month the crew go out to the ship to ensure continued operational maintenance work is carried out.

“The ship is still used regularly to broadcast new and old music by a number of volunteer DJs, some of whom were out at sea in the old days broadcasting to the UK.

“All broadcasts are now legal and can be heard worldwide by listening on line to radiocaroline.co.uk ”. Besides their main AM and regional DAB transmissions Radio Caroline also operates an online sister station ‘Caroline Flashback’ aimed at those people, of a certain age, who still associate Radio Caroline with the pop music of the 60s & 70s.

Ronan O’Rahilly and Radio Caroline not only revolutionised radio for a generation, but ultimately it led to the creation of BBC Radio 1 as well as the inception of commercial radio and even to our own Tameside Radio 103.6FM, online, on mobile and on DAB Digital. What a legacy!