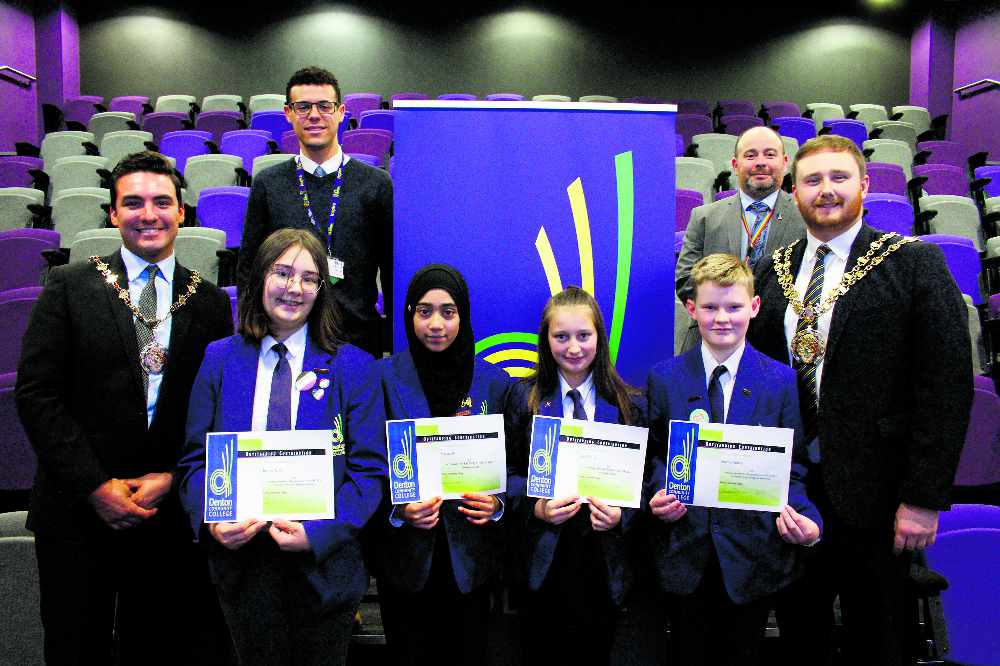 Students at Denton Community College have been rewarded for their commitment to the LGBTQ+ community with a presentation at the school.

Two students have been elected to the school council in the role of LGBTQ+ allies, liaising with the community in the school and presenting their problems to the council.

A new badge has also been designed, promoting LGBTQ+ inclusiveness and has been added to the school’s group of badges.

More than 300 Year 8 students were also treated to a workshop by Hive North on developing students’ perception of LGBTQ+ bullying and understanding how the language they use plays an important role in acting as an ally for others.

The Civic Mayor of Tameside, Cllr Leigh Drennan, alongside his consort and representatives from Tameside Council, were invited along to view the workshop and present awards to four pupils.

Jess Evans and Rija Zaidi were rewarded for the LGBTQ+ ally badge which has now been put into production, while Emma Cox and Harry Palmer were presented with certificates for their election to the school council.

Cllr Drennan was touched by the workshop.

He said: “There were some very emotional stories and the engagement from the students at Denton Community College was fantastic.

“They asked some really good questions and I think it’s great to see the college supporting our LGBT+ people in Tameside.”

Liam Spencer, head of religious studies and personal, social and health education at the school said: “We’ve been doing some surveys of students and their experiences and what we see is the more work that we do, the less students experience bullying.

“We want people to tell others about their experiences so we can tackle them.”