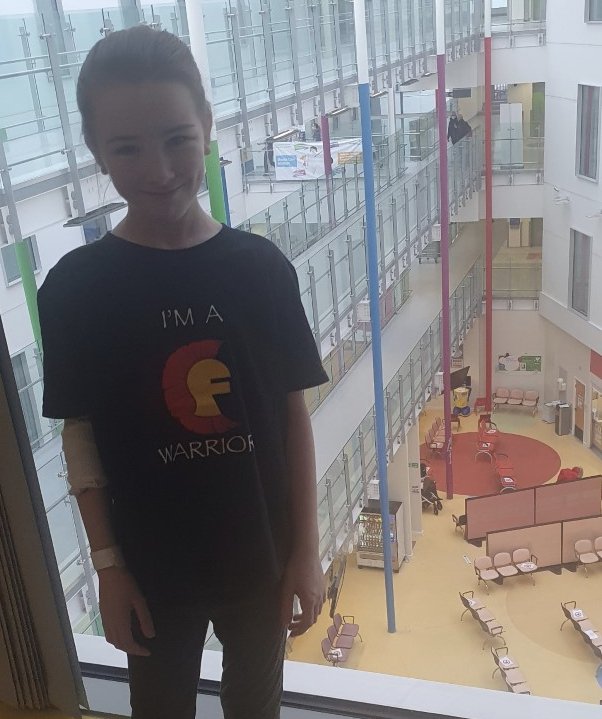 A little girl from Ashton with cystic fibrosis is busy helping to cheer up children going through the same tough experiences as her.

Nine-year-old Layla Evans has been living with the progressive genetic disorder – which causes persistent lung infections and limits the ability to breathe over time – almost from the moment she was born.

The Year 5 pupil at Oasis Academy Broadoak is currently experiencing problems with her health and has to be admitted to the Royal Manchester Children's Hospital every three months for two-week periods – on top of regular monthly appointments. She is already dreading her next admission just after Easter.

But to help keep her mind off it, Layla is busy walking and riding 100 miles this month to help raise vital funds for the Cystic Fibrosis Trust, putting together parcels full of goodies to send to other children with cystic fibrosis who also have to spend time in hospital, and she has also designed some t-shirts to help raise money for the cause. 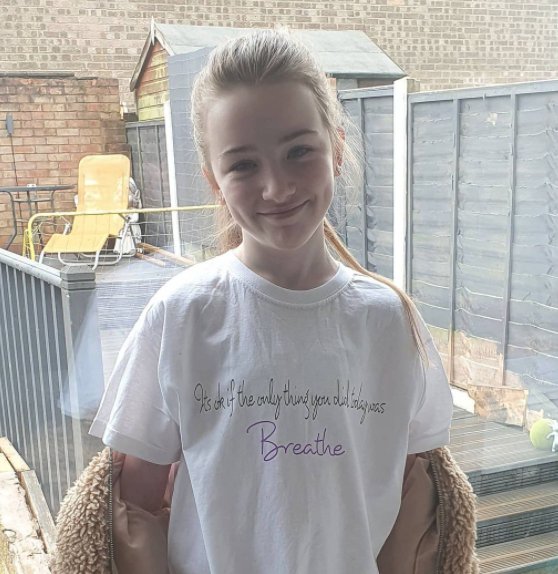 Layla wearing one of the t-shirts

Telling us about how cystic fibrosis affects Layla, her mum Charley Evans told the Reporter: “We found out she had it when she was a month old. At first, it didn’t really affect her much but recently she’s been admitted to hospital and now she’s got to be re-admitted every three months for two weeks at a time because her lungs are getting bad.

“She has to have physio twice a day, nebulisers three times a day, she takes medicine with everything she eats. Just in general, a normal kid of her age can run fine and doesn’t get out of breath, whereas Layla is really starting to struggle now with running and general exercise which a normal kid wouldn’t.

“She has to go into hospital for IV antibiotics every three months which she absolutely hates. She hates anything to do with hospital. She also has to have intense physio to help her lungs to make sure they don’t get any worse. Eventually she will need oxygen but it’s to prevent her needing that right now.”

Layla’s condition is also very hard for her family – especially for her seven-year-old brother Jack when she has to go into hospital.

“Obviously because of coronavirus, she’s not allowed out of her room when she’s in hospital and she’s only allowed one person to stay with her so her brother can’t visit her and that makes it even harder,” Charley added. 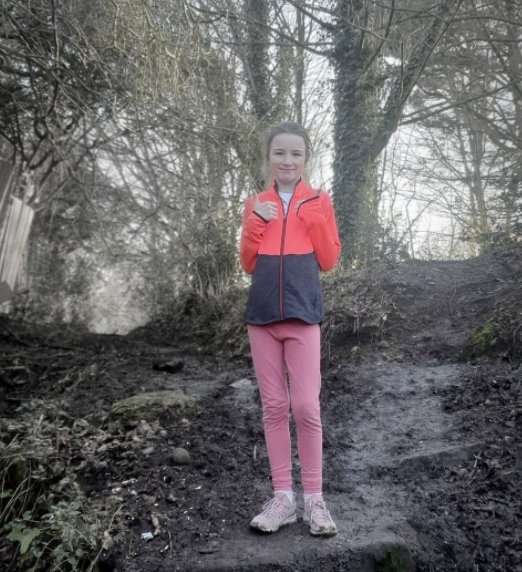 Layla during one of her walks

“It’s difficult for us as a family, especially because Jack doesn’t have cystic fibrosis so he doesn’t understand what she’s going through either.

“They have never really been away from each other apart from when she’s in hospital and get on very well so it’s not the best for him but he helps her. Layla’s school is also really supportive. I couldn’t ask for a better school to be honest.”

Despite the daily challenges, Layla’s family are trying to keep a positive frame of mind and Charley has a message to families going through a similar situation.

“Just keep doing what you’re doing because it’s the best you can do,” she said. “It is hard and it’s made worse when you look at Layla as she looks like a perfectly well child because it’s the inside that’s poorly – her lungs and her digestive system that you don’t see.

“We know the condition will get worse as she gets older and that worries me as a parent but we’ve tried to stay positive about it and do everything we can now to prevent it getting worse.”

In her own words, Layla told us why she is so determined to help other children going through what she is.

“I love being outside so I’m riding my bike and walking 100 miles because when I’m in hospital it’s really boring sometimes and I don’t want people to feel the same way,” she said.

“I want to make sure other boys and girls have a good time when they’re in hospital.”

Ahead of her next stay in hospital, Layla has also been collecting Easter eggs to give children on her ward a sweet treat. 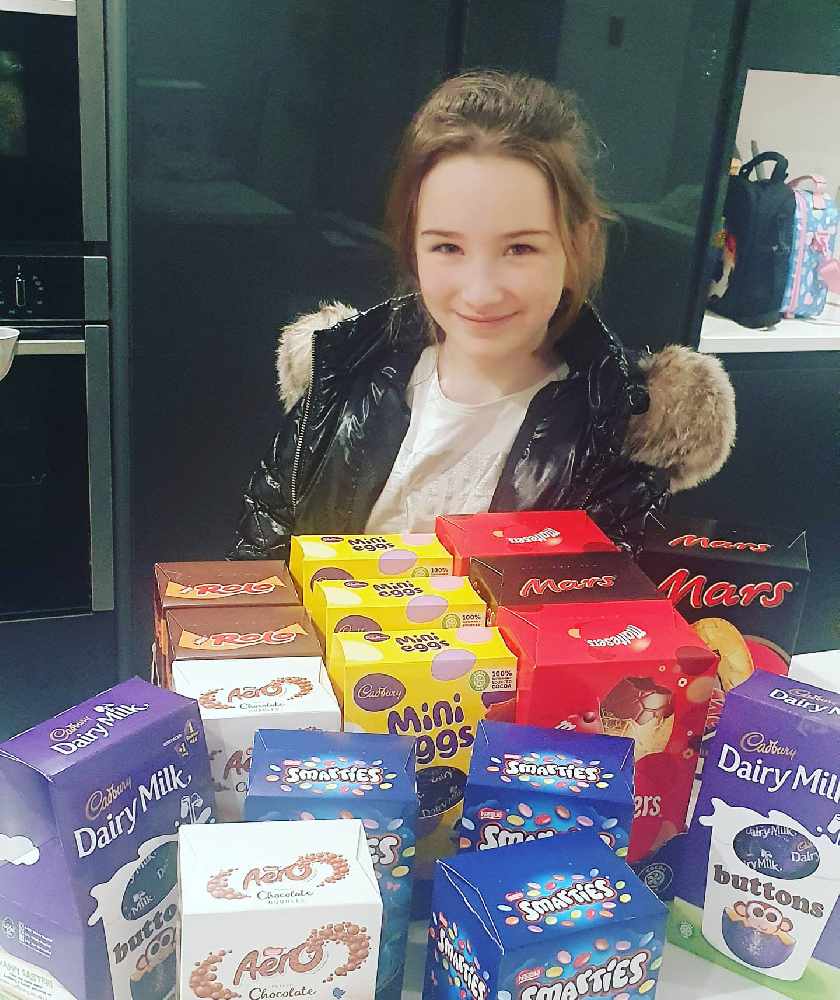 The support that the kind-hearted youngster has received from the wider community has been overwhelming for her mum.

“She’s been told that she has to be admitted on 5 April – the day after Easter – so she’s decided that she wants to take lots of Easter eggs to the ward she has to stay on. People have kindly donated eggs too already. It’s amazing how people have supported what she’s doing to help cheer her up. I was so shocked, I was quite emotional really.

“We’ve made a little group on Facebook called Layla’s Hospital Surprises. There is a cystic fibrosis group on Facebook and we’ve posted on there to tell people if their child is admitted to hospital to please let us know so we can send a parcel full of goodies to them from the donation money.

“When Layla was admitted to hospital for the first time, a lovely lady called Lesley Porter whose child has cystic fibrosis sent us a parcel and it really cheered Layla up so we want to do the same for other people.”

To support Layla, you can visit her GoFundMe page – where donations will be evenly split between making up the parcels for children and the Cystic Fibrosis Trust – at https://www.gofundme.com/f/layla-is-raising-money.

Meanwhile, Stamford Cars taxi office on Cavendish Street in Ashton – where Layla’s uncle works – is accepting donations of Easter egg donations on behalf of Layla so she can take them to the hospital.

Layla on one of her visits to hospital.