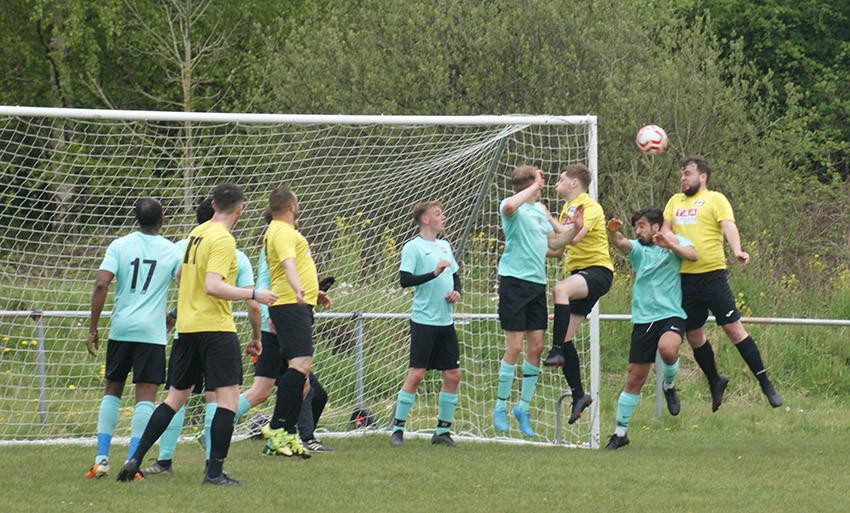 There was  a glut of goals and plenty of drama on the penultimate day of the cup competition divisional rounds to set up a terrific final day of qualifying for the quarter-finals.

No doubt there will plenty of squeaky body parts in action on Saturday!

The top game in the Rhodes Cup for Premier and division one clubs was in Group C at Salford Vics, the Rhodes Cup holders against Mellor, with a 100 per cent record in their games played this season.

It certainly lived up to its pre-match billing with a real goal fest seeing Vics come out on top by 7-4 in a terrific game, well refereed by Pete Darby.

Josh Lawman led the way for Vics with a hat-trick backed by Joe Axon (two) and Matty Bailey and Pete Potts to set up a great last day with four teams battling for the top two slots.

The other game saw Urmston Town beat South Manchester 2-0 to stay in the race along with South.

The top game in Group A was a much closer affair as Rochdalians beat Dom Doyle 3-2 to go three points clear of Dom Doyle who are level on points with Irlam Tigers who cruised to a 7-1 win at Trafford United.

In Group B Moston Brook booked their last eight slot with a comfortable 6-0 win over Lancashire Amateur Cup finalists Milton and they will be joined by De la Salle Reds who enjoyed a big 9-2 win at Didsbury.

It’s all to play for in Group D with just two points separating the top four clubs.

A close 3-2 win for Manchester Polonia over Signol Athletic sees them on top by a point.

Abacus Media pulled off a superb 5-3 win at North Walkden to move to within a point of them and Stretford Paddock who eased to a 4-0 win at High Lane.

The Wray Cup for teams in divisions two and three saw Group A turned on its head as Wythenshawe Wanderers lost their 100 per cent record going down 5-0 to Hattersley.

After converting a penalty in two minutes Hattersley quickly added to more goals and never lost control after that.

Bedians won 2-1 at Abacus Media reserves to close the Wanderers lead to a point and the two will meet in a final crunch game with Hattersley poised for a slip by either team.

The other game saw South Manchester reserves beat Stoconians 5-1 but it is too late for them to make the next stage.

Sale Ams booked their quarter final berth with a big 7-1 win at Salford Vics reserves who had James Grantham providing their consolation goal.

Signol Athletic will be joining Sale as they had a big 7-2 win over Village Manchester and the other games was much closer with Elton Lib Hargreaves winning by the odd goal in five hosting Didsbury reserves.

Shaw Athletic showed their intent in Group C with a big 11-1 derby win over Santos and it’s all down to final games for Aldermere and Woodhouses JFC to see who joins them in the next stage.

Aldermere beat Woodhouses 5-1 to draw level with them on points and the other game in the group had Old Stretfordians scoring the only goal of their game with Hooley Bridge Celtic to enjoy their first win of the campaign.
Group D will go down to the final day as just a point separates the top three teams with Mellor reserves beating Chadderton Cott 2-1 while Stoconians reserves shared six goals with Stretford Paddock reserves to stay in the mix.

The Whitehead Cup for divisions A and B sees AFC Stockport through in Group A after a thrilling 4-3 win at Bury Ams reserves and Flixton JFC look set to join them after a big 9-0 trouncing of Trafford United reserves.

It’s down to the wire in Group B with a 5-0 derby win for Mellor thirds putting them in the driving seat.

Two points off their pace are Dukinfield Athletic reserves with a 2-0 win at Parrs Wood Celtic and Chadderton Cott reserves despite losing 2-1 in their local derby with AFC Oldham thirds.

Salford Albion are home and dry in Group C with a hard-earned 2-1 derby win at Irlam Tiger Rangers.

A 3-1 win by Aldermere reserves over Old Strets seconds moves them to a point of the Rangers.

In Group D both Hillgate against Salford Storm and Kartel Sports against Moston Brook thirds had 3-2 wins to stay level on points at the top of the group and a 5-2 victory for AFC Oldham thirds over Milton reserves gives them a slim chance of catching the top two.

Finally in the Hellawell Shield for teams in divisions C and D sees AFC Stockport Warriors cruising into the last eight with a close 3-2 win over nearest rivals Shaw Athletic reserves.

Deans had a big 7-1 win at Stoconians thirds but have a big goal difference to make up on Shaw Athletic.

Group B is still wide open with Salford Storm reserves staying a point clear of Moston Brook fourths after being held 1-1 by Govan Athletic who are still in the frame.

Radclyffe reserves are through and stay top of Group C despite being held to a 1-1 draw with Urmston Town Vale who remain two points behind them.

Waiting for Vale to slip up in the final game are Spurley Hey reserves after a 3-2 win at Village Manchester reserves.

The other game saw Altrincham Hale enjoy a comfortable 4-1 win at Whalley Range.

There are three teams in the hunt in Group D with non playing Greater Manchester FC on top with a two point lead over FC Bury Aces who drew 2-2 at Didsbury thirds who had Phil Woodbridge and Matty Kulik, with a stunning set piece, providing their goals as they twice came from behind to earn a point.

Staly Lions were roaring as they walloped Stoconians fourths 9-0 to keep their hopes alive.