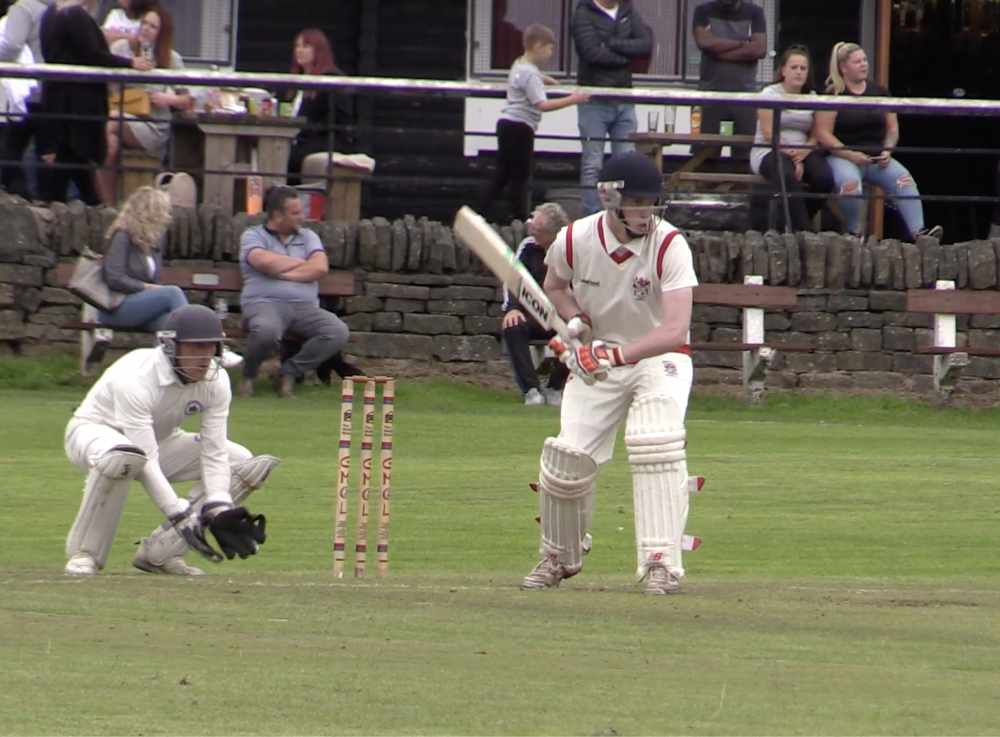 A pleasant Saturday afternoon saw a full programme, and with a third of the campaign now completed the league tables are beginning to take shape.

Denton SL made it four wins for the season, and after Roe Green’s surprise defeat at the hands of Egerton are 3 points adrift from the leaders. They did however, make hard work of the win. Having dismissed struggling Glodwick for 72, (Scott Kirwin 4-26), they tumbled to 15-5 in reply with the mainstays all dismissed. It was left to Ben Tighe to take control, and his unbeaten 49, (occupying 79 balls), took them to the win. DSL will be looking to build on this next Saturday when they visit struggling Greenfield.

With Bradshaw losing to Walshaw, Denton West still stand at the top of the table despite going down for the first time this season as they visited Bury. Andy O’Brien, (69), held the innings together as West batted first and made slow progress to 83-4 off 36 overs. Some late aggression saw a further 77 added in 14 overs. Bury made a brisk start in reply and advanced to 83-2 in 20 overs. Despite 3 wickets from Callum Flynn thee hosts won by 4 wickets with 7 overs to spare.

There was a thriller at the Paddock, Royton. Glossop batted first and Harry Dearden showed his pedigree – his 108 was his first century for the North Road club. Decent middle order contributions from Joe Moss and Alex Coates left Glossop finishing on 241-7 – a real challenge for a Royton team which has been short of runs. The early departure of former Lancashire man, Paul Horton would have left Glossop hopeful of victory, but they were undone by a sensational innings from Ameya Bhaave, who took Royton to a 2-wicket victory, finishing unbeaten on 146. Oliver Kenyon and Coates picked up 3 wickets each for Glossop.

After bowling Stand out for 102, (with 3 wicket hauls for Mike Finan and Keegan Taylor), visiting Flowery Field would have been looking at a comfortable win. But it was a close-run thing. When Flowery fell to 65-6 in reply the game was in the balance, but they inched over the line, winning by 2 wickets, and while standing in mid-table are only 9 points adrift of the leaders.

Stayley picked up a comfortable win in a local derby with Uppermill at Oxford Street. Batting first the visitors had no answer to Chris Ware. His 7-24 reduced Uppermill to a paltry 57ao. Despite three early wickets for David Roberts Stayley cantered to a 7 wicket win inside 14 overs.

Mottram remain top of the division, with a 100% record from completed games after a comfortable win when they visited Dukinfield. It was slow progress when Dukinfield batted first as they crawled to 120-9 off 50 overs. This was a slight recovery from 77-8, as Ryan Fitton and Jordan Swann both had three wicket hauls. Mottram lost three early wickets in reply but Steffan Fielding and Oliver Andrew steadied the ship, leaving Mottram winners by 6 wickets.

Having won at Milnrow on the opening day Hadfield failed to repeat it in the return game. The visitors ran up 172ao with Liam Doyle picking up another 5 wicket hauls, (finishing with 5-41). Hadfield’s reply stumbled from the start, and with Cameron Ball being the only batsman to reach 20, they fell away for 106, and a 66-run defeat.

After an impressive win over Denton a fortnight ago, Droylsden have now lost two on the bounce. Visiting Austerlands a total of 108ao was unlikely to overly trouble the hosts. Droylsden reached 83-2 after 15 overs but fell away dramatically after that, the remaining 8 wickets falling for only 25. Austerlands lost 4 wickets but got the win with plenty of time to spare.

Micklehurst posted 165 as they visited Glossop 2nd XI. After losing 2 early wickets a strong middle order performance, led by Tim Wood, (48), set Glossop a decent target to chase. Amir Shahzad, (who finished with a fine 7-48), made some early inroads and Glossop fell to 50-5, and Micklehurst were well in the game. Runs continued to come, but with wickets falling, Glossop still needed 16 with eight wickets down. There were no further alarms as the visitors went down to their 3rd loss of the campaign, leaving them in mid-table.

Ashton’s season of woe continues as they lost for the 5th time, and still await their first win. Batting first against visiting Springhead only Brad Phillips, (52), made much of an impression as they reached a below par 139ao. The Springhead reply was patient, as they took 35 overs to reach the 100 mark. Despite a couple of late wickets, they accelerated to a 5 wicket win with 10 overs to spare.

Ashton Ladysmith made short work of the game by trouncing Blackley by 10 wickets. Three wickets each for Paul Reynolds and Khaliq Rehman redecued Blackley to 22-6 and there was no coming back as they folded for 72. It was no problem for Ladysmith as they raced home inside 10 overs, Richard Taylor leading the way with an unbeaten 49.