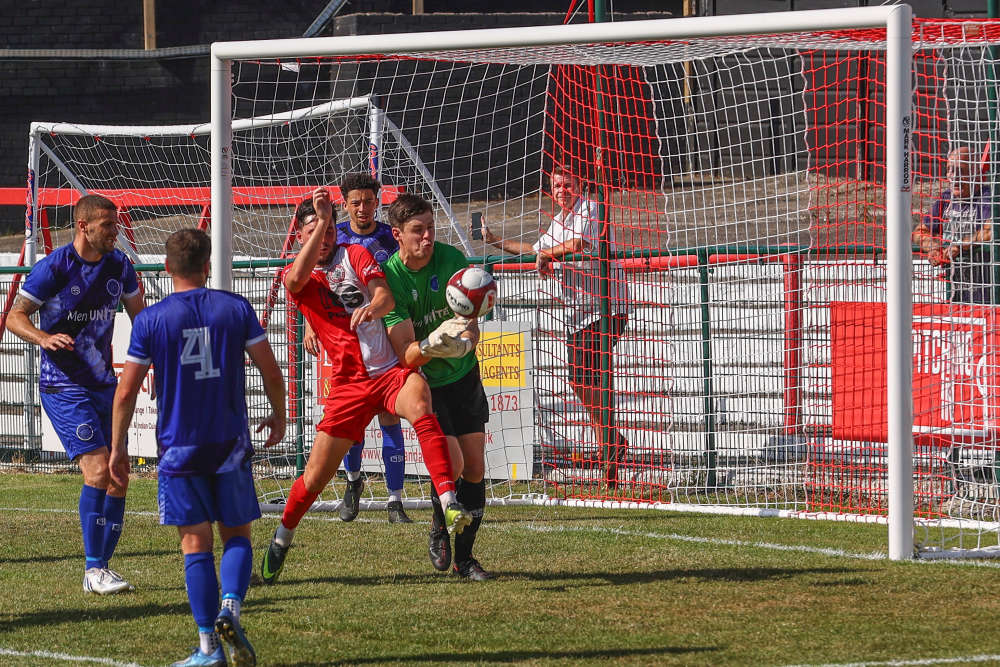 Ashton United were pegged back by two Danny Glover goals having taken a healthy advantage heading into the final ten minutes of play at Hurst Cross on Saturday afternoon against Hanley Town in pre-season action.

Inside two minutes, Callum Saunders capitalised on a loose back pass from Town defender Charlie Walford, the Robins’ new forward rounder the advancing Ben Chapman in the visitors’ goal but steered his effort just wide of the mark off balance.

On five minutes, Michael Brewster cleared the crossbar from 10-yards out after Saunders was dispossessed inside the area having latched onto Max Harrop’s lofted free-kick, with the loose ball falling to the Robins’ captain on the half turn.

Harrop was at the heart of the action for the Robins in a playmaker role tucked in behind the centre forwards, pressing excellently and portraying great determination in winning the ball back; on 20 minutes, he did just that, pressurising Cotterill as he attempted to clear a bouncing ball, the former Altrincham man won the dual but couldn’t generate enough power or height to lob Chapman.

James Baillie swung in an inviting cross for Ben Hough to neatly tuck home on the volley from 12-yards out on 25 minutes after Brewster switched the play to the spacious right-flank.

Five minutes into the second period, a trio of recruits this summer – Harrop, Saunders and Hough all linked up excellently in the final third, with the latter forcing a strong one-on-one save out of Chapman from close range.

Hanley controlled proceedings for a ten-minute spell on the hour mark with both Charlie Walford and Reece Jones causing the Robins problems as they pushed for an equaliser.

However, the Robins doubled their lead on 81 minutes as Matty Regan was allowed to advance and rifle a low driving strike into the bottom right corner past the outstretched Chapman.

Hanley’s Danny Glover produced an exceptional strike of his own from range three minutes later which left Hartley with no chance at all, allowing the visitors back into the game.

Glover then bagged his brace two minutes from time as he lashed in a venomous strike at the near post from an acute angle, levelling the scoreline.