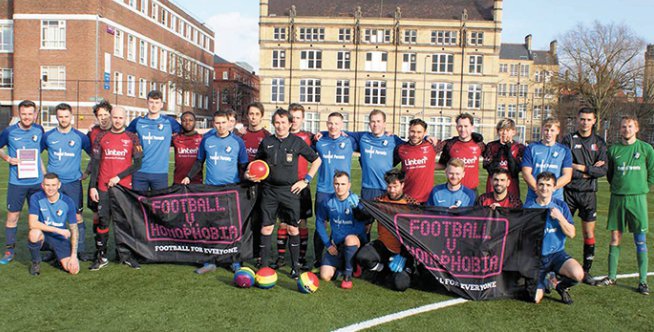 The L and C were praised for their active support of the Anti-Discrimination policy from a wide number of sources.

It was supported by the players of Village Manchester and Chadderton Cott before their Division Three game as they got together to display banners for Football v Homophobia with the full support of league officials.

The busy programme of league and cup matches were delighted to miss the oncoming Storm Ciara and get some vital games under their belts.

In the Rhodes Cup there were two excellent and close encounters with the top one seeing Premier Division high-fliers Abacus Media and Waterloo go to the wire, with Waterloo going through 2-1.

It was even closer in the other game with Division One leaders Radclyffe hosting Urmston Town Juniors.

A thrilling game ended locked at 4-4 and Radclyffe edged the penalty shoot-out by 4-3. They await their next opponents in the quarter-finals, while Waterloo will visit South Manchester.

There were also two games in the Wray Cup and Hadfield Athletic were taken all the way by Aldermere.

After sharing four goals, Hadfield won through 3-2 on penalties and now visit Chadderton Park in the next round.

Oldham Vics have been enjoying a hot run of form in recent weeks and they kept up the momentum as they moved into the quarter-finals with a breathless 6-5 win at Elton Lib Hargreaves to book a tie against North Walkden.

In the Whitehead Cup, Salford Storm provided probably the shock of the day as the Division A basement team pulled off an amazing 4-1 win over promotion hunting Old Stretfordians seconds.

Joining them in the next round are Parrs Wood Celtic with the Division B leaders beating Division A side Waterloo reserves with a comfortable 3-0 victory and they now host Mellor thirds in the quarter-finals, while Storm will entertain Bury Ams reserves.

There was just one game in the Hellawell Shield and the close game was edged by Moston Brook thirds over Bury Ams thirds by 2-1 to book a quarter-final tie against Division C high-fliers Irlam Tiger Rangers.

In the Premier Division, basement team Milton showed how they have reached the semi-finals of the Lancashire Amateur Cup, holding runaway leaders Whalley Range to a 1-1 draw.

The other relegation dogfight match saw Trafford United climb off the bottom with a 2-0 derby win at South Manchester.

Dom Doyle were 3-1 winners at Mellor to stay in the top half of the table.

Salford Vics and High Lane shared four goals in a game where the high winds made for difficult playing conditions.

High Lane took the lead mid-way through the second half, then like buses where you wait an hour with nothing happening and then two goals came along in a short time as a Josh Lawman’s curling dipping 30 yard shoot flew in the top corner.

Five minutes later Pete Potts climbed above the defence to head home man of the match Jono Hayes’ cross to put Vics 2-1 up.

High Lane scored a deserved equaliser with five minutes to go as both teams went for the win, but time ran out for them with a draw being a deserved result in a game very well refereed by Mike Crump.

In Division One, AFC Oldham took advantage of leaders Radclyffe being in cup action as they cruised to a 5-0 win over Moston Brook to move three points clear at the top.

Irlam Tigers are firmly in the mix with games in hand on the top two and they had few problems in accounting for Bury Ams by 6-0.

Newton showed great defensive quality in a 1-0 win over Manchester Polonia and Signol OB kept Old Strets at the foot of the table with a 3-1 win.

The chasing pack are closing in on Division Two leaders Dukinfield Athletic, with Stoconians winning 7-0 at Chorltonians reserves to move within six points of Athletic with a massive six games in hand.

North Walkden are just a point behind Stoconians having played the same number of games as they accounted for South Manchester reserves 7-2.

Rochdalians reserves climbed off the foot of the table with a 5-2 win over Mellor reserves and Santos enjoyed a 4-2 mid-table win over Bedians.

In Division Three, leaders Chadderton Cott showed their title intent with a comfortable 7-1 win at Village Manchester, but Signol Athletic stay on their heels with a 5-0 romp at Hooley Bridge Celtic.

Denton Town reserves bounced back after some recent defeats to win 6-2 at Milton reserves, but Stoconians seconds had to work hard for a 2-1 win at Abacus Media reserves.

With Division A leaders Old Strets seconds in cup action, the race for the top spot heated up as Wythenshawe Wanderers had Jamie Johnson, Connor Whalen, Mark Lucas and Euen Fallon sharing the goals in a 5-0 win over Rochdale Galaxy and AFC Stockport beat AFC Oldham reserves 3-0.

The other games produced victories for Trafford United reserves by 2-1 at Deans and Dukinfield Athletic reserves by 3-1 over Moston Brook reserves.

With Division B’s top two teams in cup action, Chadderton Cott reserves missed their chance to close the gap as they were beaten 3-1 at Spurley Hey reserves.

Hillgate had a good win at Chorltonians Athletic inspired by early goals from Sam Dugdale and Mitch Williams to go on and win 6-1.

Flixton JFC were also in the goals as they enjoyed a 4-0 win at AFC Oldham thirds.

Old Strets thirds just made it with a 2-1 win over Stoconians thirds and in another close game, Heaton Mersey shared two goals with Bury Ams with Joe Stokes netting for Bury, while Warren Dawkins replied for Mersey with young debut referee Nat Dando looking to be a good prospect for the future.

In Division C, leaders Irlam Tiger Rangers shrugged off their recent dip in form with an exciting 4-3 win at Altrincham Hale.

Second-placed Chadderton Park reserves matched this score at AFC Stockport Warriors and Salford Storm reserves made it a good day for the club, walloping Stoconians fourths 7-0.

Staly Lions continued their good run with an efficient 3-0 win over Oldham Vics reserves and Whalley Range reserves were celebrating long and hard after a 3-1 win at Govan Athletic thirds.