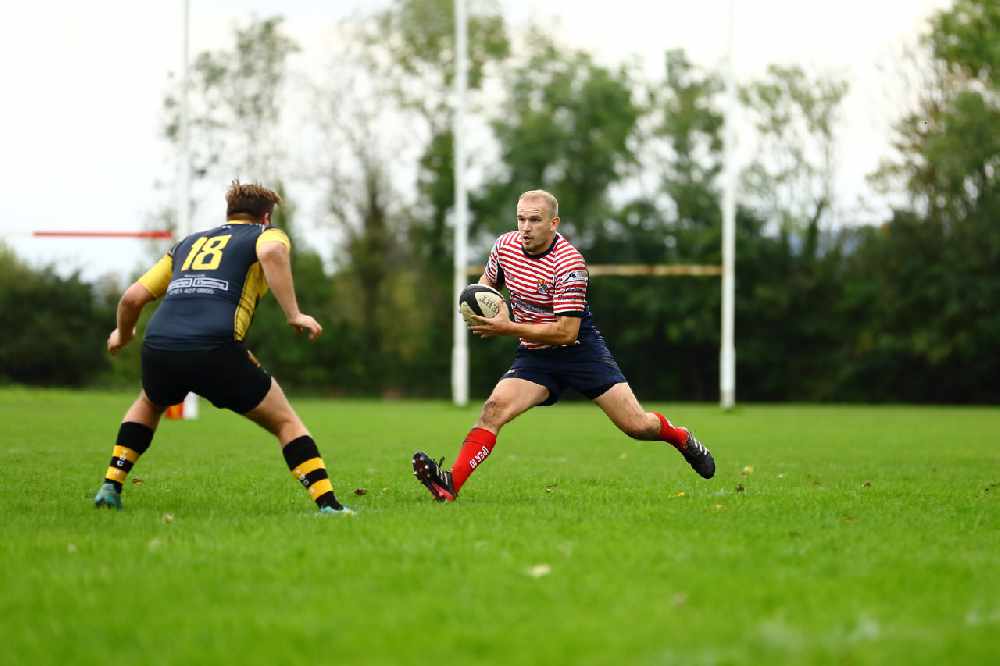 The game started as expected at a fast pace and Toc H showed invention and adventure from the off. An alert winger immediately spotted space behind the Oldham defence on their first attack and launched a kick and chase. He headed in into the in-goal area and looked certain to open the scoring but Megram had stormed across from the other side of the pitch and won the chase to touch down and spare our early blushes. However, they did open the score shortly afterwards when Oldham were caught offside in front of the posts and they converted a penalty to lead 0-3.

Oldham responded well and their efforts were rewarded when they secured good field position in the Toc H half with many options available. They chose wisely and spread the ball to the right touchline on the 22. Arundale took contact, and with the Didsbury defence stretched, the ball was recycled and went through several pairs of hands across the width of the pitch to the left touchline where John Souter drove over in the corner. The touchline conversion was missed and Oldham led 5-3.

Didsbury were full of life and belief with some mobile forwards who cause a bit of havoc in the loose if you don’t make your tackles. However, Oldham were the architects of their own downfall as an alert Didsbury forward intercepted the ball on half-way. He had a colleague in support who scored by the posts. The conversion made the score 5-10. They could and perhaps should have scored again as a charged down kick looked to have caught Oldham napping again but a forward pass thwarted them. Immediately after a poor clearance was fielded on halfway, but with space available and the line wide open, a forward pass once again came to Oldham’s rescue.

They took advantage of their good fortune and a penalty gave us a line out seven metres from the try line. Roddy caught the ball and a maul drove on. He then worked his way back round and broke off the back and proved unstoppable from a couple of metres out. Megram’s conversion made the score 12-10 with half time on the horizon

A penalty reversal for foul play eased Oldham from their 22 into the Toc H half. The hosts went through phases and Megram put a kick behind their defence into the 22. It was a 50/50 ball between Ryan Arundale and the full back but Ryan wanted it more. He poked it through into the in-goal area and raced through to touch down. The conversion from the touchline went wide so the halftime score was 17-10.

The high tempo nature of the game continued in the second half with the defences generally on top. Both teams struggled to dominate possession but this was partly because they perhaps weren’t patient enough or clinical enough at key moments. Each team also gave away needless penalties which relieved pressure both ways. Didsbury had a long period of pressure which was relieved when the Oldham eight put in a Herculean effort to drive Toc H of their own scrum ball which resulted in a penalty. However, the resulting lineout misfired for once and a dynamic hooker went on a mesmerising zig-zagging mazy run which bamboozled the Oldham defence and he scored by the posts. The conversion levelled the score at 17-17 with 25 minutes remaining.

It was time for Oldham to switch on and fortunately they did. A penalty gave them an attacking lineout in the Didsbury 22 on the left-hand side. The ball was spread to the right touchline and recycled a couple of times with Meggy making some hard yards. It was then spread back to the left and John Souter ran a fantastic line to hold the defence before passing to fellow prop Tom Hannon who was unstoppable from 5 metres despite the brave attempt by the full back. Souter’s line was exceptional. He straightened up rather than running an arc out wide which stopped the Didsbury defence from drifting and created the space for Hannon. The conversion was missed so Oldham led 22-17.

Aspin, Wood, Taquila and Townsend joined the game and shortly afterwards, Oldham were once again in their 22 and were patient enough to play through several phases which tied in the Toc H defence. Arundale ran a beautiful cut short line that was just too good for the defence and he scored a very good try by the posts. Megram’s conversion made the score 29-17.

Didsbury spent most of the rest of the game in the Oldham 22 but we were in no mood to concede more points and defended well. Oldham were guilty of not following orders about not competing at the breakdown. There were also some petty and unnecessary and hurtful outbreaks of petulance of which we should all be much more mature about. All of this meant that they spent the last 10 minutes with 14 men but the line stayed intact. The game ended as Megram landed a sweetly struck penalty from the 10 m line to make the final score 32-17.