Mossley get the Bank Holiday blues 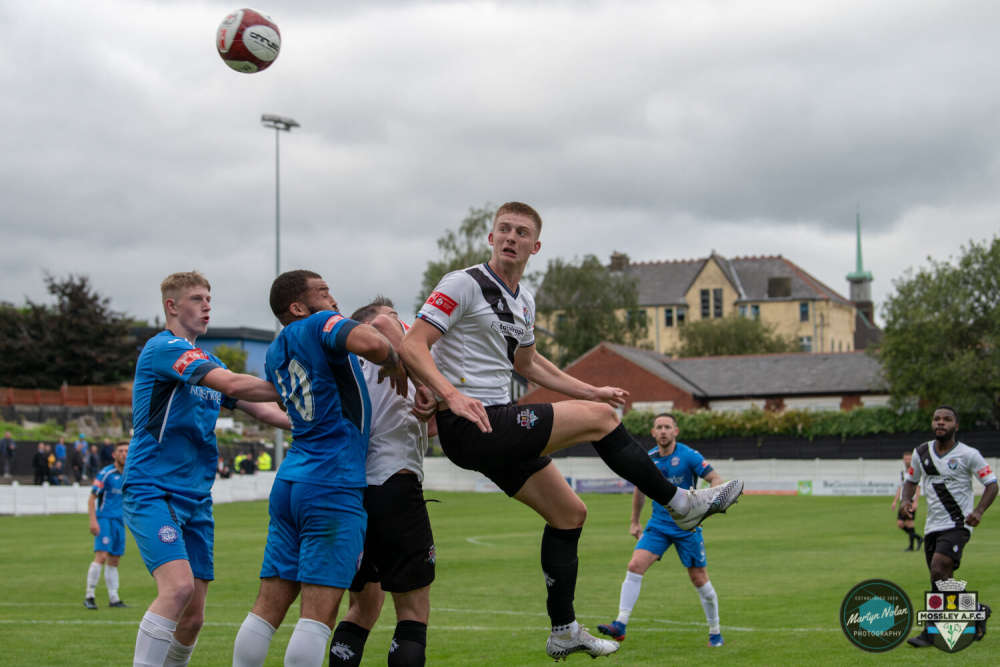 A goal in each half by Antony Brown and new signing Sewa Marah earned an injury hit Mossley side a very hard earned 2-1 win at Widnes' Halton Stadium on Saturday.

With six players sidelined by injury manager David Fish was forced to shuffle his pack for this game which meant first League starts for Ben Lowe, Bailey Marsden, Connor Morris and Alex Dinsmore and also debuts from the bench for David Kuba-Kuba and latest addition Sewa Marah. However, all the replacements played big parts in what was something of a backs to the wall victory.

Widnes no doubt enjoyed more possession throughout as they used the big Halton Stadium pitch to best effect, getting the ball wide early and getting in plenty of crosses. However, the Mossley back line and keeper Latham were once was again solid as a rock.

Widnes had the early chances with Jordan Barrow and Ben Wharton causing Mossley plenty of problems. Barrow missed a great chance for the home side when he somehow screwed his shot from a great position out for a throw in on the far side while Latham made good saves to deny Wharton and the lively Banister.

It was pretty much against the run of play whenMossley took the lead on 23 minutes. Antony Brown chased a 'lost cause' but got to the ball first, his initial effort was saved only for the rebound to loop over the now stranded keeper and despite a desperate attempt by a Widnes defender to keep the bouncing ball out, it found it's way into the Widnes net.

The game was more even after the goal as Mossley grew in confidence. That confidence was increased following the introduction of new signing Sewa Marah who replaced Connor Morris at the break. The big forward was an instant threat in helping open up space for Butterworth's saved shot and then in creating a half chance for Brown.

The best was yet to come from Sewa Marah though, as in the 64th minute he burst onto Ben Lowe's through ball, outpaced his marker, stepped back inside the keeper and rifled home from just inside the Widnes box. What an impact!

Widnes threw everything they had at Mossley thereafter and finally pulled a goal back when Ben Wharton flicked home a cross from Mossley's left wing to create a tense finale with fifteen minutes still remaining.

Wharton came close again when another headed effort came back off Latham's right hand post before beingcleared to safety.

Again Widnes piled forward and despite Mossley finding ways out through long runs by sub David Kuba-Kuba and Devon Matthews, Widnes still contrived one more chance from a set piece. Fortunately for Mossley the free kick was headed wide and the final whistle sounded to as much relief as joy for the traveling Lilywhites.