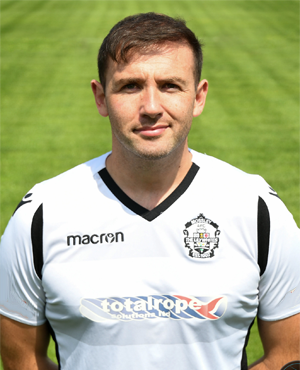 Mossley have confirmed the appointment of Andy Keogh as interim manager.

It follows the departure of Dave Wild to Matlock Town.

A statement on the club's Twitter page said: "As the search for our new Manager/Head Coach progresses to the next stage, we are delighted to announce that Captain Andy Keogh will take charge of first team affairs until further notice.

"Andy has the full confidence of the directors, staff and players and we know both he and the squad will be backed, as always, by our fantastic supporters."

30-year-old Keogh began his playing career as a youth teamer at Altrincham and then played for Manchester League side Wythenshawe Town and then Flixton before joining Winsford United in 2012 and Mossley in August 2013.

He departed for Nantwich Town in December 2013 after scoring 9 goals in 29 Mossley appearances but returned to Mossley in August 2014 and made a further 95 appearances for the Lilywhites scoring another 17 goals before transferring to Trafford in February 2017.

Keogh was re-appointed as team captain for the 2018/19 season.