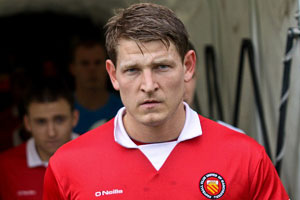 Adam Jones during his time at FC United of Manchester.

The 33-year-old has featured for a host of non-league clubs and has made over 600 appearances during a 15-year career.

Jones spent four years with The Nash, seeing the club finish in the UniBond First Division North Play-off Final during four consecutive seasons. He eventually left to sign for FC United of Manchester in 2010.

For a fifth consecutive season, Jones suffered Play-off Final heartbreak as FC United lost to Bradford Park Avenue, 1-0 through a goal in the last minute of extra time.

There was a similar occurrence during the 2013-13 season. FC United reached the Play-off Final again but lost for their third consecutive season and Jones’ sixth season, against Hednesford Town.

Jones made 107 appearances for FC United over three seasons, picking up the player of the year award during his first season. However, with opportunities limited due to an injury, he was only able to make ten appearances in his last season before deciding to move on.

He initially joined Nantwich Town on-loan which resulted in a permanent move in June 2014.

A year at Nantwich Town was followed by a transfer to Hyde United. Jones made 42 appearances for The Tigers across two seasons with a spell at Shaw Lane in between.

Jones retires after most recently playing for New Mills. He made eight appearances in total, coming off injured at half-time on his last appearance against Cammel Laird on Saturday, November 2.

New Mills said in a statement on Twitter: “Confirmation that Adam Jones has left the club and will seek a non-playing role elsewhere.

“We wish Adam all the best, he may have only made 8 appearances for the club but leaves a big impression at Church Lane.”