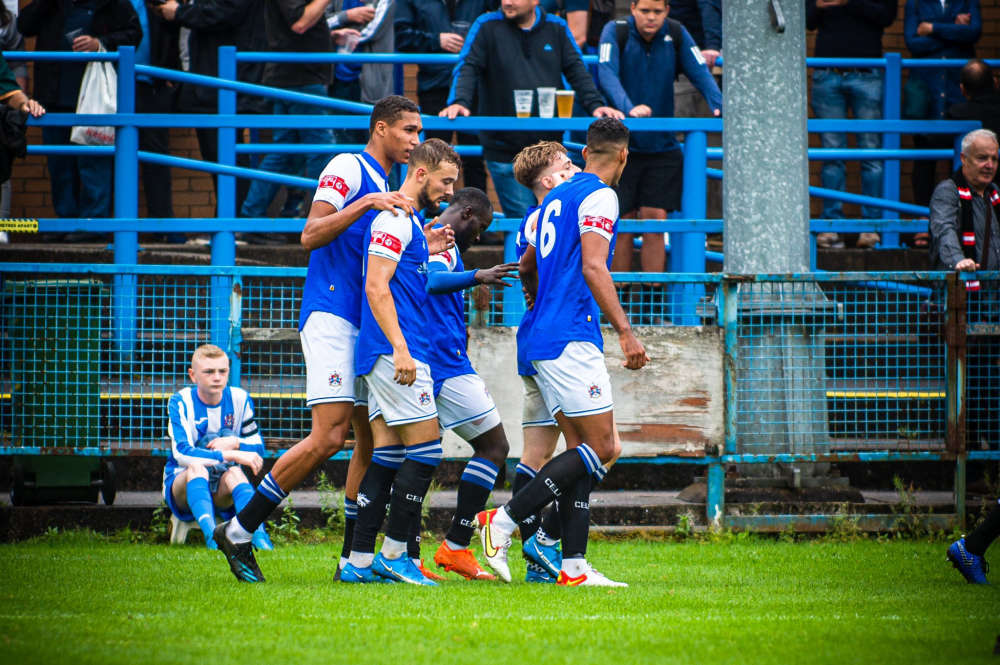 The last time Celtic scored five in a league game was August 2019 in a 5-1 win over Scarborough and in truth, Celtic could have scored more than five against FC United.

Celtic fielded two young loanees for their debuts with Accrington loanee Liam Isherwood in goal and Salford City striker Dackers up front and it was the latter that got Celtic’s afternoon off to a great start.

On 17 minutes, Dackers pressed FC United defender Aaron Morris and in doing so, managed to rob the defender. He drove towards goal, cut inside on to his right foot and placed a curling effort into the top right corner of the goal.

Dackers nearly had a second just three minutes later, a free-kick was headed back across goal by Keenan Quansah, Dackers managed to connect with the ball but his acrobatic effort fell just over the cross bar.

Celtic’s visitors did look dangerous on occasion and Celtic’s young keeper Isherwood was called into action twice in quick succession. He was able to save a long range effort pretty comfortably however FC United’s next attack on 24 minutes required an impressive piece of goalkeeping.

A shot from distance took a big deflection off a Celtic player however Isherwood reacted quickly to get across his goal and parry the shot away, the rebound was met by Cedric Main but Isherwood was there again to make a double save and keep FC United out.

Celtic had to withstand some more pressure as Connor O’Grady managed to head a cross behind for a corner which would have been met by a FC United striker if Celtic’s defender hadn’t have intervened but it was Celtic that scored the game’s next goal on 41 minutes.

More pressure from Dackers forced a defender into a terrible back pass, Bolton Wanderers loanee Jay Fitzmartin interceded the ball, rounded the keeper and put the ball into the empty net, giving Celtic a two goal cushion before the break.

Celtic would not have wanted to have conceded straight after the break but a superb strike from Brad Holmes from 25 yards looked to have got FC United back into them game just 90 seconds after the restart.

Celtic had other ideas and just two minutes later, scored their third goal of the afternoon. Skilful winger Johnson had beaten his man numerous times throughout the afternoon and he did it again to grab his first goal for the club. Dackers played Johnson in down the right-hand side, he cut inside, dribbled past the defender and drilled a low powerful strike into the net.

Celtic did not want to stop there, Harris thought he had scored his first of the season, he latched onto a bouncing ball but Lavercombe was able to save his effort with Fitzmartin’s rebound rising over the bar.

On 62 minutes, Dackers scored his second of the game and Celtic’s fourth. Johnson intercepted a loose pass and found Dougie Nyaupembe, he fed the ball to Dackers who from just outside the area, thumped the ball past a helpless Lavercombe.

The goals kept on coming and four minutes later, Celtic’s Captain Sam Wedgbury got involved to score his first for the club. A corner was headed clear to the edge of the area, Wedgbury was quickest to react and his first-time effort went through everybody and into the bottom left corner.

Harris went even closer than his previous effort on 70 minutes, Dackers’s through ball saw Harris one on one with Lavercombe, his strike beat the keeper but was cleared off the line by a recovering defender.

Holmes pulled another goal back in added time but Celtic’s fine display saw them pick up three points after scoring five goals.