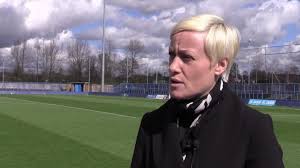 Oldham Athletic have confirmed the appointment of Natalie Atkinson as Managing Director.

Natalie joins the club with a wealth of experience, having achieved great success in the same role during her time with Curzon Ashton and Southport.

Prior to her appointment at Curzon in 2016, Natalie was the Football Development Manager for the Manchester Football Association. She played an instrumental role in securing funding applications and developing artificial pitches across Greater Manchester. Natalie took these objectives into her role at the Tameside Stadium and helped to launch a number of key initiatives, including an online ticket system and free tickets for every child under the age of 11 with a Tameside postcode.

But her biggest achievement was arguably securing a considerable grant to instal a new state-of-the-art 3g pitch, which has become a steady revenue stream and currently hosts the first team, academy, and hundreds of juniors.

What's more, Natalie was part of the backroom staff which helped to put Curzon on the map. The Nash enjoyed a memorable FA Cup adventure in 2016 which ended in heartache against AFC Wimbledon in the second round. Prize money accrued from the run, combined with the second round fixture being shown on BT Sport, generated more than £150,000 for the club. Natalie also hit the screen as a guest on BBC One, alongside football presenter Dan Walker and former professionals Trevor Sinclair and Dean Saunders, before Curzon's fixture at Westfields.

Off the pitch, Curzon were also crowned Club of the Year at the Pride of Tameside Sports Awards, before scooping the same prize on a regional scale at the Greater Manchester Sports Awards.

Whilst at Boundary Park Natalie will work with the off-the-field team in establishing an efficient structure for the workforce, whilst also working closely with the Community Trust to deliver the vision and help improve the profile of the club in the local area.

Speaking upon her arrival to the club, she said; "It’s an exciting opportunity for me personally.

"I’ve been in the role a couple of weeks now and there’s plenty of work to do, but I’m looking forward to the challenge ahead and helping the club off the pitch achieve key targets."