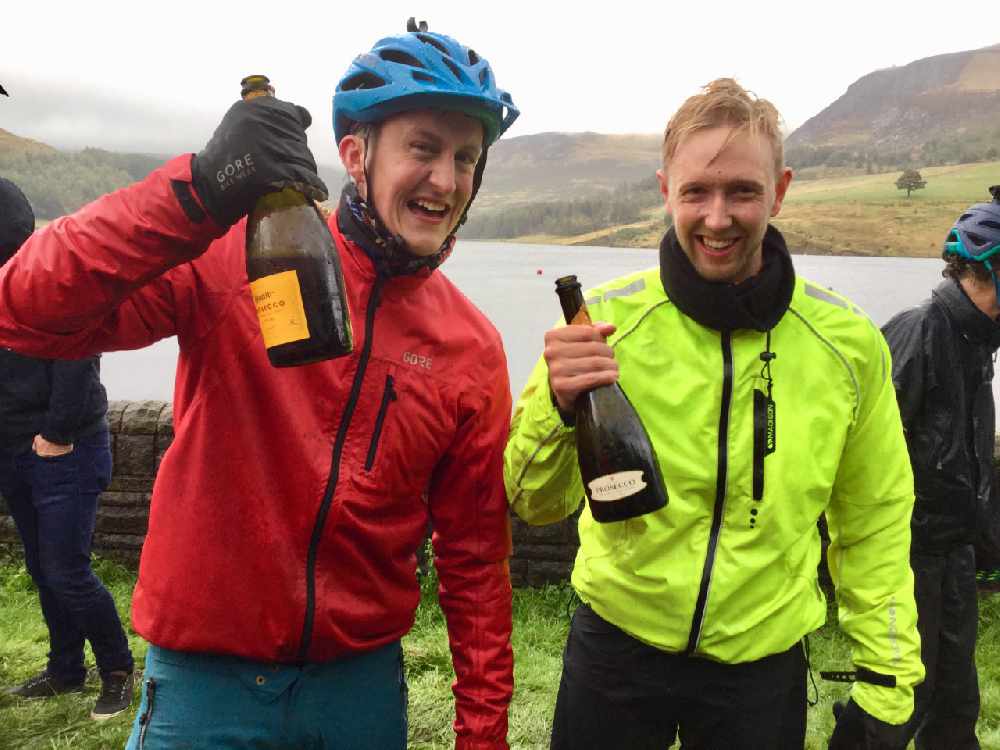 An intrepid cycling duo whose families have shared personal tragedy have completed a gruelling challenge to raise awareness over Alzheimer's.

Backed by enthusiastic family and friends they were urged on to complete their mammoth ride which began at 10am last Friday morning and ended in a sluicing downpour at 10am on Saturday.

In all, they covered a remarkable 139 miles around a twisting 2.5 mile loop at one of Oldham’s favourite beauty spots. And their valiant efforts have so far raised more than £6,000 for Alzheimer’s Research UK.

After their challenging ordeal, the boys surrounded by a loyal band of family and friends talked poignantly of how the loss of their relatives had spurred them on.

Matt, from Denshaw, lost his grandfather, Jack Thompson, to the illness two years ago aged 80.

He said: “What hit me so hard and upset me so much with my Grandad, wasn’t just that he died. It was how it turned a proud, adventurous and admirable man I looked up to, into a shell of a person that couldn’t recognise his own family. Alzheimers is such a cruel disease.

“My Grandad used to hold seminars to hundreds of people at a time. He hiked the Himalayas. He trekked the jungles, hunting for rare birds.

“He sailed the Antarctic and the Arctic in search of polar bears and penguins. He was an adventurer and nature lover in the truest sense of the words. He was a keen bird watcher. We would regularly head out into the woods at the back of his house in Bury for a walk.

“He could not only identify the names of all the birds around him from their sound alone, but could communicate back and forth with them, mimicking their exact call with his hands and mouth. He was an amazing man, a great parent and a loving Grandad.

“To see his deterioration upset me far more than I can put into words. At the time, it was something I just didn’t know how to deal with.

“To see a man of such intelligence and pride be broken down to struggling to sing nursery rhymes, being unable to dress himself and eventually dying in a bed with family members around him he didn’t recognise, was crushing.

“It had a huge affect on me, my family and especially my Mum. My Grandad instilled into me a love of the outdoors from childhood.

“I have amazing memories of hiking in the hills in all weathers with him and my Grandma. He’s the main reason I love being in the outdoors to this day. Without him, my business MTB Fitness wouldn’t exist, I wouldn’t love the outdoors and I wouldn’t be the person I am today.”

And he added: “Whether you have experienced Alzheimer's first hand or not, we can all relate to it’s horrific effect and the heartbreak it causes.

“I implore you to donate what you can to cure Alzheimers. I can’t tell you how much it would mean to me and all of my family.

“Grandad’s death taught me one lesson over all others: Enjoy every single day, because one day you won’t have anymore to enjoy.”

James, who completed the ride in memory uncle Frank Osborne, who died aged 91, said: “He was a polite, proud man and always dressed immaculately. He was an engineer, loved maths, numbers and anything with an engine. But his love for cars was nothing compared to his love for my Auntie Millicent.

“He met Millicent in 1938 just before WW2. They spent the majority of the war separated and back then Skype wasn't a thing so communication wasn't possible, but they both waited till the war was over. 70 years of marriage later, they were still incredibly in love.

“He would recall stories from the war over the dinner table and have everybody crying with laughter from his terrible jokes. Then once dinner was over, he would slip me a chocolate bar and wink at me. I knew that was his way of saying I'm proud of you.

“Not too far into the future, Frank started to deteriorate. His Alzheimer's began taking over. He stopped wearing a tie. Became very insular... and  didn't tell his jokes anymore.

“I remember the last time I saw him in the home. He couldn't remember anybody's name and I don't think he knew who anybody was. But he looked my way and winked...

“I will never forget that moment. I didn't fully understand at the time the severity of the situation. But looking back it makes me well up every time.

He added: “When Matt asked if I wanted to ride my bike for 24hrs in aid of Alzheimer's Research UK, I did not hesitate. We were both up for the challenge and we resolved to complete it was ever the weather.”