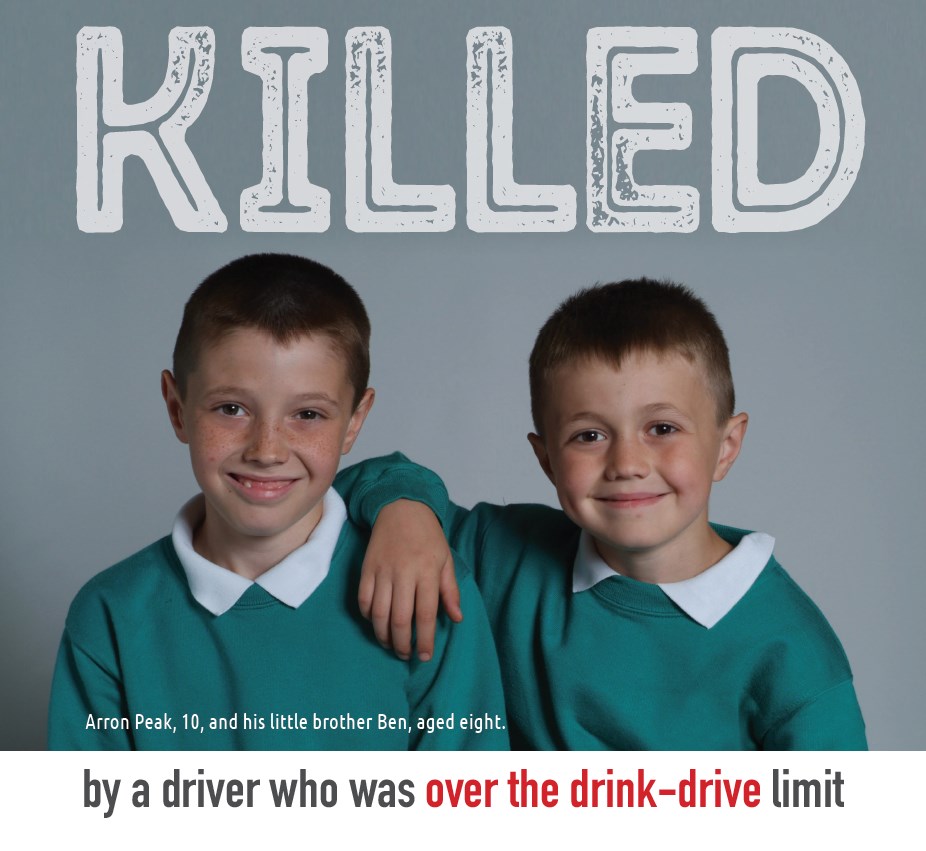 A poster featuring two brothers killed by a drink driver will be placed in bars, pubs and clubs across Derbyshire to remind revellers of the very real dangers of drink and drug-driving.

Ben and Arron Peak were killed by a driver who was twice the drink drive limit and had had just two hours sleep following a wedding party.

Former Plymouth Argyle goalkeeper, Luke McCormick, was jailed for seven years and four months after getting behind the wheel.

The Range Rover he was driving on the morning of June 7, 2008, smashed into the back of the people carrier that Ben and Arron were travelling in.

The pair died at the scene, while their father, Phil Peak, was left with serious spinal injuries.

McCormick had drunk beer and sambuca during a friend’s wedding and had only slept for two hours before getting in his 4x4.

Mr Peak was taking Arron, 10, and Ben, eight, from their home in Partington, Greater Manchester, for a day out at Silverstone when the Toyota Previa they were travelling in was hit from behind on the M6 in Staffordshire, forcing it down an embankment.

Derbyshire Police were given permission to use Ben and Arron's photo for a campaign by their parents, with the help of the road safety charity Brake.

They will be placed in licensed premises across Derbyshire from today (Wednesday) - timed to coincide with the increase of festive parties in the lead up to Christmas and New Year.

With more parties and social events, the risk of people driving under the influence increases.

The campaign is being supported by the Derbyshire Fire & Rescue Service and the East Midlands Ambulance Service, with all three emergency services seeing the aftermath of drink drivers in the county on a regular basis.

Chief Inspector Jim Thompson, who leads the roads policing and collision investigation unit at Derbyshire Constabulary, said: “The family and friends of Arron and Ben are tragically all too aware of the fatal consequences of drink-driving.

“The actions of Luke McCormick were selfish, unthinking and, in the end, fatal. He ignored the pleas of his friends to not drive while clearly still drunk and his arrogant belief that he could do as he pleased came at a truly heart-breaking cost.

“McCormick, in getting behind the wheel that morning, put every road user in danger but he believed it would simply not happen to him.

“The photo on these posters, we hope, will act as a stark reminder of the cost of drink-driving. Getting a friend to be the designated driver, taking the bus or ordering a taxi, are simple ways to ensure that you do not get behind the wheel drunk."

He added: “For those that think they can get behind the wheel they should know that my officers are out on the roads of Derbyshire 24 hours a day, seven days a week – in both marked and unmarked vehicles.

“A 15 minute drive home could cost you your licence, your job and could even see you jailed. The simple way to make sure that doesn’t happen is to not drink and drive.

“It is also crucial to understand how long it takes for alcohol to clear your system and make sure that you are not over the limit the day after you have been drinking.

“There are many calculators available online that can give you a rough estimate of when you are safe to drive, but these measurements are influenced by many different factors and you cannot guarantee that you are not over the limit by using them.”