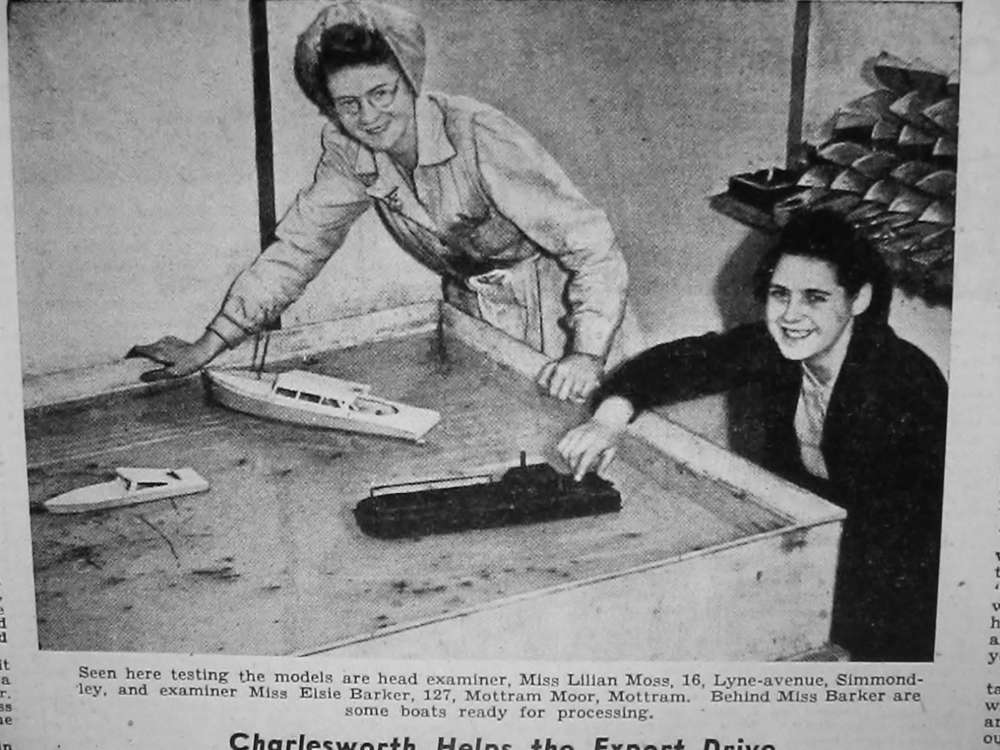 Examiners Lilian Moss from Lyne Avenue, Simmondley, and Elsie Barker from Mottram Moor, test the toy boats for leaks before they are packed away and sent off to the distributors.

Jet propelled boats were being exported around the world from a factory in Charlesworth as fast as workers could make them.

In fact, the ships, created from Second World War rockets, were taking off so fast that staff at Jetcraft Ltd, Lee Vale Mills, could not keep up with the demand.

“They are selling in the United States of America, South Africa, South America and Ceylon.”

You have probably guessed by now that the boats were toys. But they were big business and, at a time when foreign currency was vital to Britain, were helping our export drive.

Mr Bryden went on: “We are receiving every encouragement from the Board or Trade for our export trade and our production for the home market is restricted to a certain quota and we cannot produce any toys for British children until January next year (1947).”

There were three brands of boat in the Charlesworth fleet: the blue and cream motor boat called Derwent, which was being sold in the UK; plus - and for export only - the Ladybower cruiser and the Henrietta barge.

They all worked on the jet-propulsion system, a blue flame from a methylated spirit container underneath a power unit, driving the boats at a steady speed over a course that could be altered by a rudder.

The Derwent retailed at 18 shillings and four pence (just less than 90p) the others were said to be more expensive.

We have to admit that the boats made by the 30 workers from no longer needed rocket containers and cardboard were not the quickest.

The Derwent was the fastest, capable of travelling three miles in three-quarters of an hour without refuelling.

The other two were fitted to travel around 10 miles in two and a half hours.

Considering that most were destined for kitchen sinks, baths and park ponds, it was adequate.

The kids loved them and, just as important, they were bringing badly needed dollars and other currency into Britain.