Hundreds gathered at town hall to celebrate the end of war 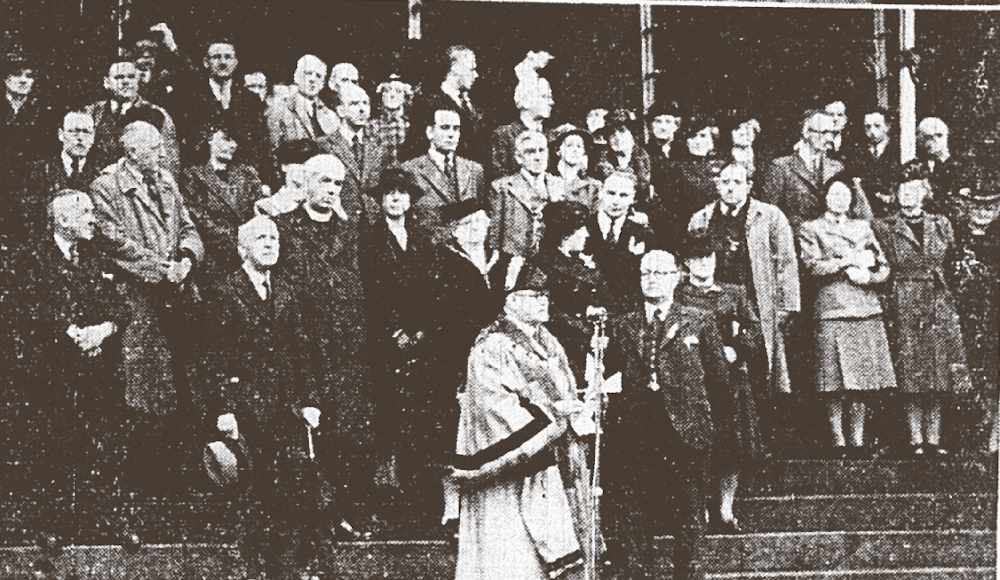 The Mayor of Ashton addresses the crowds.

Mayor of Ashton, Alderman WH Flowers paid tribute to the 'heroism of British forces and our allies'

Heavy showers earlier in the day failed to dampen the spirits of the hundreds who gathered outside Ashton Town Hall to hear Churchill’s ‘Victory in Europe’ broadcast through loudspeakers on VE Day.

It was well into the afternoon before the gloomy weather showed any signs of clearing up, but thankfully the clouds had begun to lift well before 3pm when the bongs of Big Ben were heard and the Prime Minister began his address.

At the town hall steps, the Mayor of Ashton, Alderman WH Flowers was flanked by members of the Town Council.

Following the broadcast, he stepped forward to pay tribute to “the heroism of British forces and our allies around the world... and a wonderful united effort.

“We must also pause to express our sympathy with those who have lost their loved ones...

“There are homes in Ashton in which there are sorrowing hearts because of the vacant chair. Whilst we rejoice at the cessation of hostilities let us be moderate in our festivities.”

After prayers, led by the Mayor’s chaplain the Rev F Johns, the crowd was invited to give three cheers and a Salvation Army band played a selection of Scottish airs. 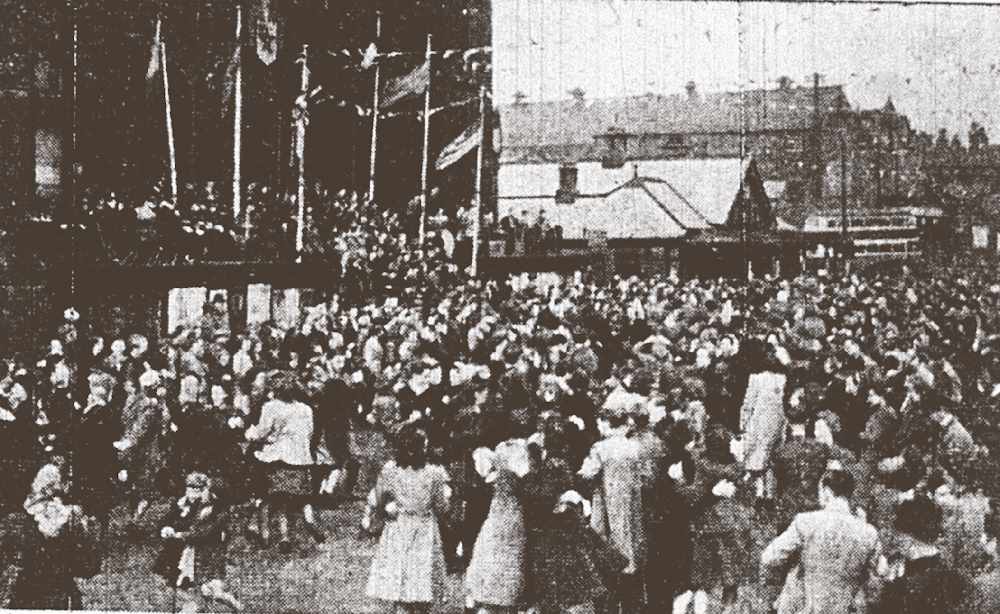 RELIEF: Hundreds gathered at Ashton Town Hall to listen to the broadcast of Churchill, before being addressed by the Mayor.

The Ashton Reporter’s round-up of the day’s events mentions that The Apex Band gave ‘restless feet the opportunity they had patiently awaited... On the roped-off roadway, it was on with the dance and let joy be unconfined... Youth predominated but elderly couples and tiny tots also took to the floor and the sun added its benediction.’

At the town hall, toes were still tapping after tea to popular dance records including that ‘truly English dance - The Lambeth Walk.’

The Mayor and councillors reconvened to hear the King’s radio address beaming out across the market ground at 9pm.

After the long years of darkness, Ashton was suddenly all aglow with the switching on of the illuminations on the town hall, the market hall and the shelters in Chester Square and St Michael’s Square.

The war memorial was floodlit and a huge illuminated ‘V’ for Victory shimmered on Hartshead Pike.

The Mayor travelled in a brilliantly illuminated bus to King George’s Playing Fields to light a huge bonfire.

The Reporter story says ‘the scene at 10.30pm was one of colour and gaiety’ with festoons of coloured lights, streamers and flags as young and old danced on until long after midnight... by which time the rain had returned.