Cycling along the D-Day landing beaches in Normandy 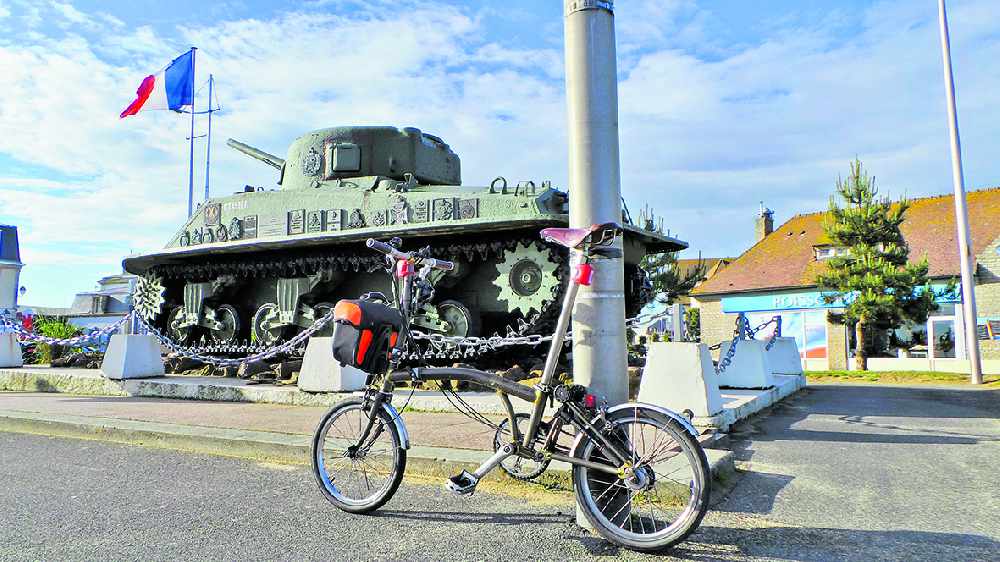 A few years ago, my then-girlfriend (now wife) Jilly and her mum, Pauline, travelled down to Portsmouth for my mum’s hen weekend on a cruise sailing from Southampton to Bruges. I went along with Jilly for the long drive from Manchester, folded up my Brompton bike into the car boot and decided to make my own cycling plans for my weekend down on the south coast.

Instead of heading over to the nearby Isle of Wight as I would normally do, I decided at the last minute to do a cycling day trip along the D-Day landing beaches in Normandy. I left on Friday by taking the Brittany Ferries night sailing from Portsmouth. I would spend the day on Saturday riding from Ouistreham to Bayeux along the coast before catching the Saturday afternoon sailing back to Portsmouth after visiting Caen’s historic centre for a few hours.

This part of the world has always been significant to me. When I was at school, I went to this part of France quite frequently as I had a French Exchange student that I visited in Caen a few times per year. Mickaël came from a very traditional French family that owned a country house in nearby Lisieux, an apartment in Caen located in a military police housing complex and despite our obvious upbringing differences, we became quite close friends.

I still remember his dad, Yves, telling me to bring home several bottles of super-strong Calvados homebrew cider for my family and a few of the crushes I had on my exchange student’s female classmates!

I rode over to the Portsmouth Ferry Port via the Gosport Ferry and had to enter the ship via the car deck. I have done this a few times now and it never stops being exciting. Riding through a busy ferry terminal and joining the sailing through the bow of the ship is a uniquely exhilarating experience.

There were plenty of other cyclists on-board the well-appointed Mont-St-Michel, but after an excellent meal in the onboard restaurant and no cabin to go to, I headed to the seating area to get my head down for the night on the reclining chairs and floor! For some people, this is one of their worst travel nightmares. For me, this is part of being ‘on tour’.

I arrived into the French port town of Ouistreham at around 6.45am French time and went down to the car deck to collect my Brompton which annoyingly was folded up and placed behind 21 other bikes! This wasn’t really an issue as after disembarking the ferry, passport checks were in force and all of the other cyclists were held up too.

I met an Australian guy in the terminal ferry queue back in Portsmouth who was doing a solo cycle tour down to Nantes and we decided to cycle together in the morning. Dave was an older chap who had completed many tough cycling challenges around the world but was over in Europe to visit family and wanted to do a more leisurely cycle tour through France.

We went our separate ways at the Canadian Memorial Museum at Juno Beach near the town of Courseulles-sur-Mer. This is a fairly new and important addition to the Normandy coast and was built to remember the 14,000 Canadians that fought in the 1944 invasion alongside the 140,000 other troops made up of soldiers from the British, American and Commonwealth forces. 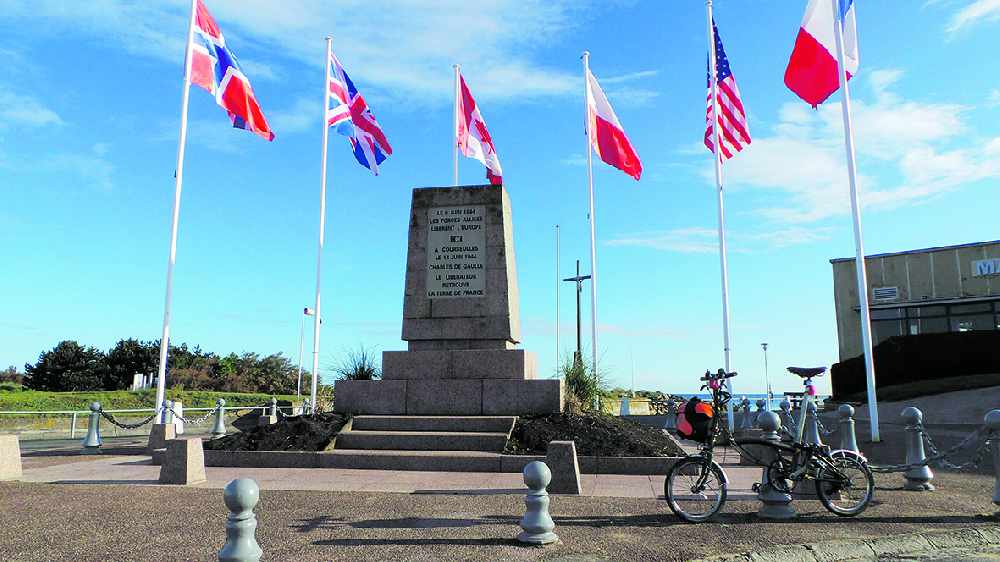 I grew up in Gosport and a town that played a major part in the 1944 D-Day preparations and was a point of departure for many troops heading towards the Normandy coast. I have grown up with constant reminders of the D-Day operation from local street name references, local memorials and museums. Yet to this day, I still cannot comprehend how the Allies pulled off D-Day given the 100-mile crossing, the poor weather conditions on the 6th June 1944, the scale of the German defences that formed the ‘Atlantic Wall’ and the level of secrecy required to complete such a complex military operation.

To think that Paris was liberated in mid-August from the first landings and that Nazi Germany was defeated in Berlin only one year later is still astounding.

One of the most memorable sights of any visit to the Normandy coast is looking out at the remaining ‘Mulberry harbours’ that rest along the wide, long sands in front of Arromanches. These rusting hulks in the English Channel were key to the success of D-Day as they allowed huge volumes of ships, soldiers and supply lines to land without taking a port town or natural harbour. Once the floating harbours had been assembled, half the battle was already won and the Allies were able to secure the beaches. 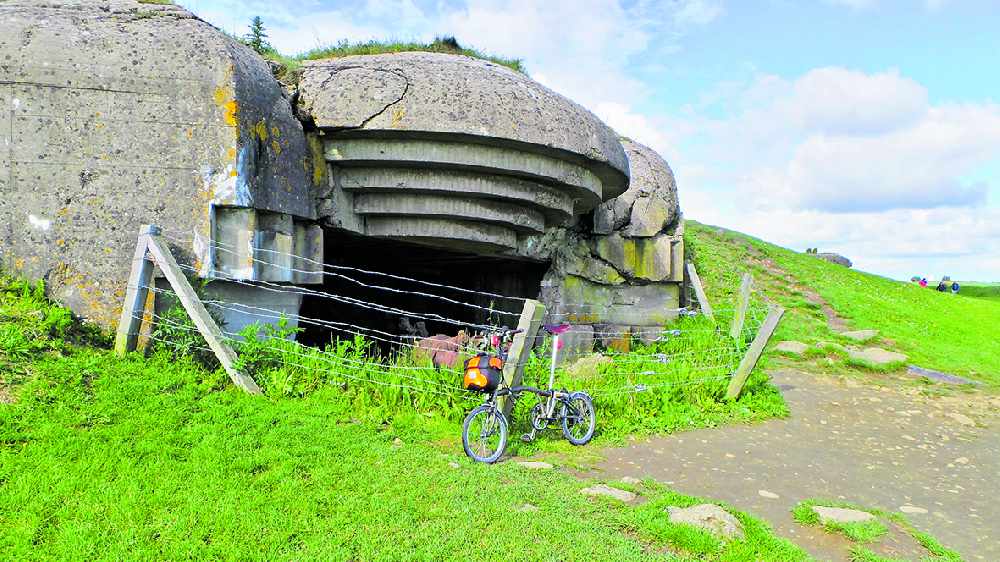 As I was riding along the coast to the preserved German Atlantic Wall bunkers at Longues-sur-Mer near Omaha Beach, I was conscious that where the tyres of my gun-metal coloured Brompton laid tracks, thousands of young men of a similar age to me had died trying to complete a similar journey with the aim of reaching Bayeux.

In a rather surreal moment, there was also the curious juxtaposition of  a newborn kitten posing for photos atop a destroyed Nazi machine gun in a preserved concrete bunker. This is possibly one of the strangest things I have seen on any cycle tour given the context of the situation.

Bayeux is a historic town with an impressive cathedral and home to the world-famous Bayeux Tapestry. I didn’t have much time here, so won’t go into detail about the history of the city. What I did note is that despite the city dating back to the Middle Ages, I don’t think the people of Bayeux have seen many people riding a Brompton bicycle because of the number of comments I received about the curious little bike!

I caught the train to Caen because I was getting pressed for time and wanted to do a quick tour of the city to bring back some memories. I went back to the football ground of SM Caen FC almost 20 years to the day of my previous visit. I also went to the city centre and took photos of the very impressive Abbaye aux Hommes. 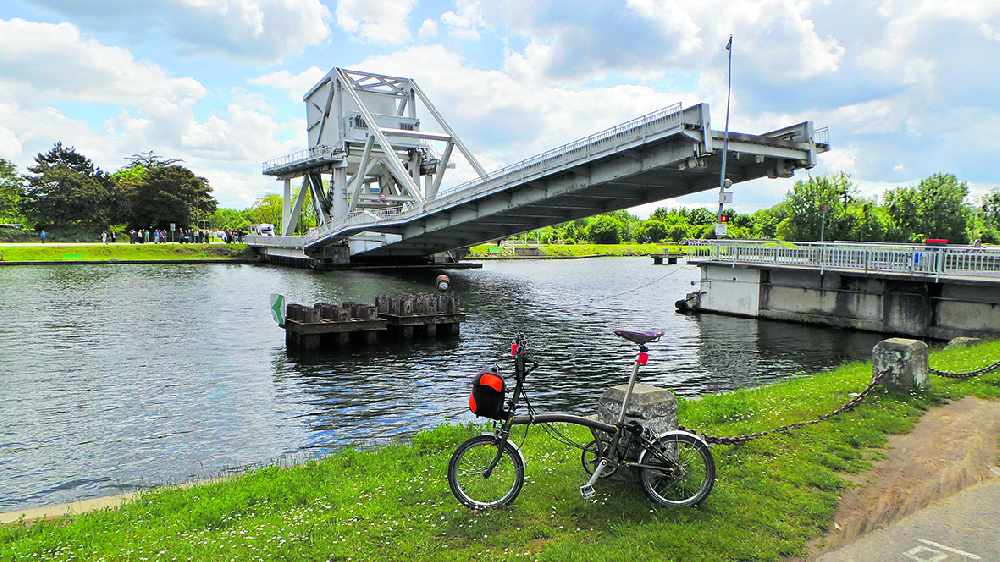 The ferry was departing in a couple of hours, so I cycled on the excellent Voie Verte cycle path back to the seaside town Ouistreham along the Caen Canal. This was everything a cycle track should be - wide enough for passing cyclists, smooth tarmac, and excellent signage with historic sights along the way such as the famous Pegasus Bridge that played a key role in the Battle of Normandy.

I arrived back at the ferry port in Ouistreham after visiting one of the former German gun batteries in a residential side-street and boarded the Normandie car ferry to Portsmouth. I sat out on the sundeck for most of the journey home and despite the best efforts of the on-board ‘entertainment team’, the crossing was a fairly long affair, especially as I only had a few hours on land. The highlight of the crossing was being served another excellent meal by the Brittany Ferries chefs and seeing the dramatic sunset over Portsmouth’s picturesque harbour!

The following morning I was back in Gosport and strolling along the beach promenade close to where I grew up to spend time with my mum and Manchester-based family who had just returned from Bruges. That day, I paid extra attention to the memorial stone dedicated to the fallen Canadian soldiers outside the popular café at Stokes Bay. I reflected on how going to Normandy when I was younger has shaped my own life and the lives of many others today. 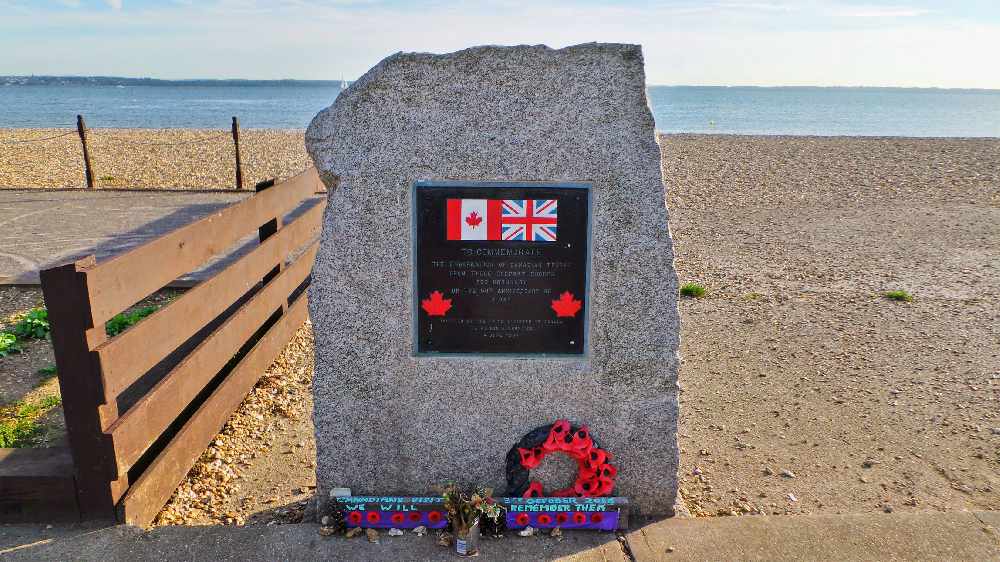