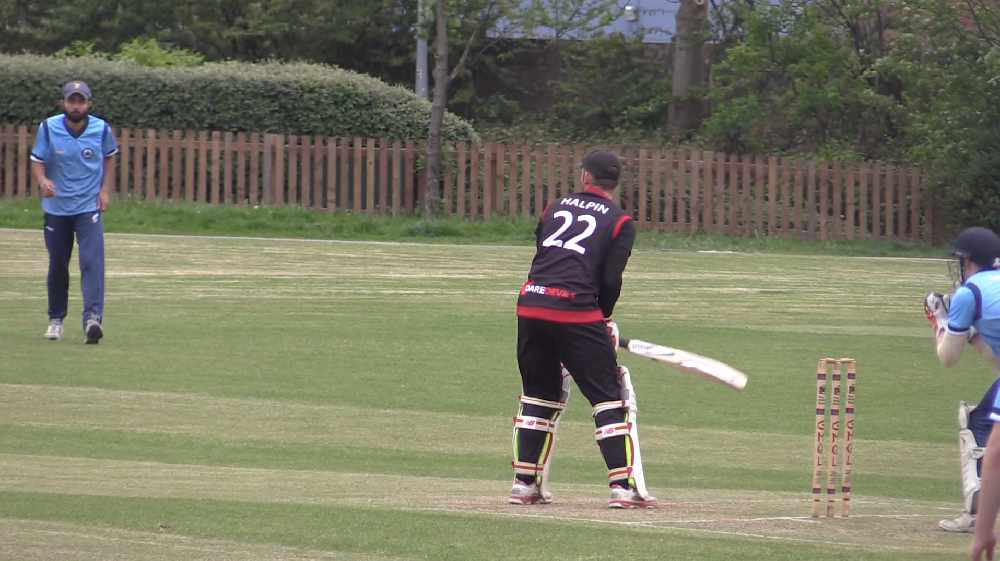 The rain had a massive impact on games across the weekend in the Greater Manchester Cricket League.

Other than 3 balls bowled at Greenfield before weather had the final say the only action was at Woodhouses. In a rain interrupted innings, (with 4 stoppages) the Woodhouses knock totalled 175-7 off 37 overs with skipper Nick Hardman falling agonisingly short of a magnificent century, finishing on 96*. The vagaries of the Duckworth Lewis calculations left visitors Flixton chasing 214 for the win and the game went to the last 10 balls but was deservedly Flixton’s as a 2nd wicket partnership of 157 between pro Tariq and Ghafoor was key. The result left Woodhouses in the relegation zone, 2 points adrift of 5th bottom Clifton. Up at the top, with 5 games left, Denton St Lawrence have a 16 point cushion over 2nd placed Flixton and three wins from hereon will land them the title and the double after their Cup win last week.

Three games beat the weather and with Denton West and Flowery Field both winning it looks to be a real fight for the title with any of the clubs down to 6th placed Heywood still having a real chance. Only 6 points separate them. At Denton West the Uppemill innings was limited to 31 overs and they posted an impressive 177-4 with ever reliable pro Ayaz Tasawar leading the way with 74*. Wests reply got off to a stuttering start and they fell to 23-2 but recovered through pro Semile Seyibokwe, (44*) and Aaqib Uppal with a fine 55, (after taking 3-67 earlier). Liam Kilburn added 49 as Wests won by 6 wickets with 15 balls to spare. Flowery Field had a convincing 8 wicket win over Denton, who managed only 104, (Declan Feakes starring with the ball for Flowery with 5-17). Mike Finan led the reply and finished with 63* in a season in which he now has nearly 400 runs and 55 wickets. At Glossop rain interrupted the Swinton Moorside knock which was curtailed after 43 overs at 150-5. The Glossop target was adjusted to 162, (under Duckworth Lewis rules) and got off to a bad start as David Wilde fell to the first ball of the innings. They were indebted to Dale Pennington, who came in at 57-4, and proceeded to hit a fine unbeaten 67 in taking Glossop to a 4 wicket win.

Not a ball was bowled in Div 1A leaving Astley with a 7 point cushion over 2nd placed Walshaw. Also in the race for the 2 promotion spots are Edgworth; Greenmount and Heyside. At the bottom it’s looking a forlorn hope for Thornham who must now realistically win every game to avoid the drop into the 4th tier next year.

Up at Richmond Hill Micklehurst reached 150-6 before the elements intervened. Elsewhere there were 4 overs at Bury and nothing in the other 4 games. The title and other promotion spot lies between Shaw; Winton and Elton with 5 games left. The key game looks to be the meeting of Elton and Shaw on 31st August.

Four games reached a conclusion with the bottom three all losing. Ashton must have been hopeful after reducing promotion chasing Stretford to 112-7 but a late rally left the hosts on 189-9. The Ashton batting is more than fragile and after a steady but very slow start they tumbled from 31-1 to 63ao. Wythenshawe secured safety after racing to a 7 wicket win over Greenfield 2nd XI who totalled 162-7, (Jack Livesey 64). The win for Stretford and SW Manchester, (over struggling Tottington), have left the pair in a four horse race for the promotion places which also involves Friarmere and Edenfield.

The leaders Saddleworth and Springhead were washed out. It leaves the former with the opportunity of clinching promotion with a win over Denton SL this Saturday. Glodwick 2nd XI beat Denton 2nd XI and Werneth 2nd XI had a 5 wicket win at Denton SL 2nd XI in the only games that reached a conclusion.

United Stars closed the gap on Friarmere 2nd XI at the top with a 4 wicket win over Royton 2nd XI and it is only Moorside 2nd XI who can stop them clinching the promotion places.