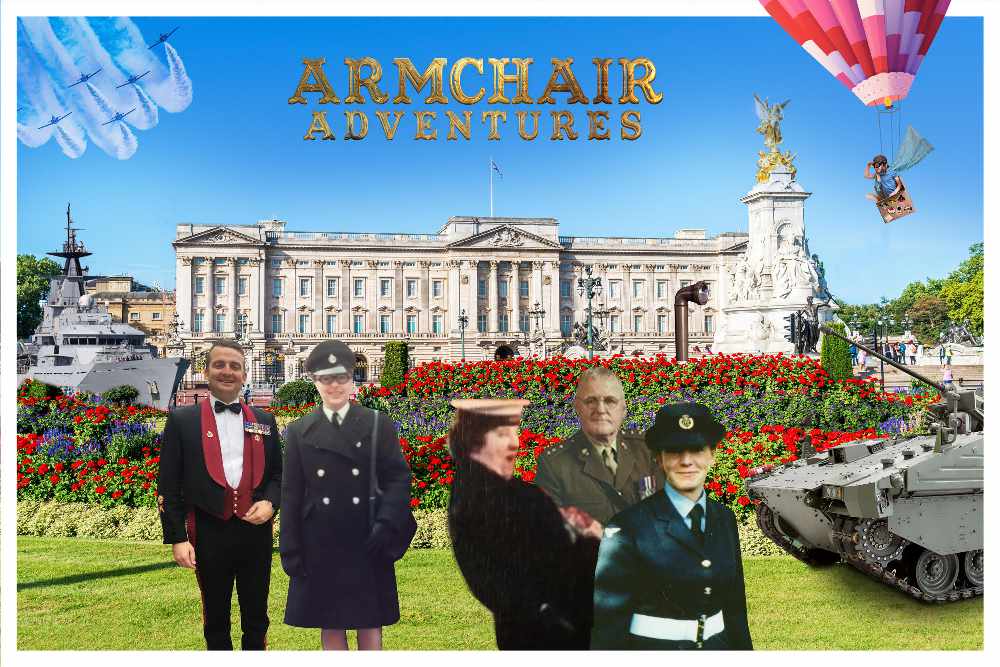 Music theatre organisation Made by Mortals have released (June 10) the latest episode of their interactive adventure podcast for primary school children, created with the help of a group of armed forces veterans.

In addition to this, the eighth and last episode of the first Armchair Adventures series is being celebrated with a huge live online show for primary schools across the North West. The five veterans will join Made by Mortals and its over-65s theatre group Hearts & Minds, as well as professional musicians and actors for the performance on July 7.

The Armchair Adventures podcast was launched by the Audenshaw-based not-for-profit organisation during lockdown and has now had 20,000 listens. In addition to this, the group has run 35 ‘Armchair Adventures Live’ workshops for more than 5,000 primary school children in the North West.

The group of veterans, who all served in the Army, the RAF or the Navy, took part in nine weekly online sessions, to create the story with music and song, based on their own lived experiences.

Deborah Cassar-Egan, who was in the RAF, said: “Being a part of this project built my confidence by discovering new ways of thinking. I loved the social aspect of working alongside fellow veterans. I laughed, cried and cherished the moments we spent working together. I can’t express how grateful I feel to be part of something that is going to bring life learning and joy to those who listen.”

The podcast features the lead character, 15-year-old Connie (played by actress Hannah Donelon), whose parents’ travel agent had to close down during lockdown. She takes the listeners on an imaginative adventure to the Queen’s Garden Party and discovers what a life of service is all about.

Andy Smith, composer and Made by Mortals director, said: “We were grateful to receive funding from Veterans’ Foundation and Tameside MBC to create this very special podcast episode. Our group of armed forces veterans had so much to offer creatively, drawn from their own experiences of being in the armed forces, and they also benefited from being a part of this shared experience.

“They also have the knowledge that their contribution will be enjoyed by school children and everyone else who listens to the podcast in the future.”

Paul Hine, theatre-maker and director at Made by Mortals, added, “The power of Armchair Adventures is in its collaboration and the unlimited restorative power of people coming together to sing, dance and use their imagination.

“As a society, we have all suffered from enforced isolation over the past year, and our music theatre work helps both the school children and the participants find a collective sense of belonging.”

At a time when travelling and meeting other people has been limited, the Armchair Adventures podcast has taken young listeners on a magical treetop journey; a superhero adventure; a trip to see the Northern lights; a seaside adventure and a showbiz adventure, a music festival and a football adventure - all through the power of music, drama and imagination.

Before lockdown, Made by Mortals’ focus was to bring interactive theatre to schools, so that primary school children could benefit from high quality cultural activities. Children also benefited from the intergenerational connection with older people in their communities. After lockdown began, they moved sessions online and created the Armchair Adventures podcast.

Made by Mortals was funded £4,300 from The Veterans Foundation and £2,100 from Tameside MBC to create this episode of Armchair Adventures.

You can listen to the podcast here