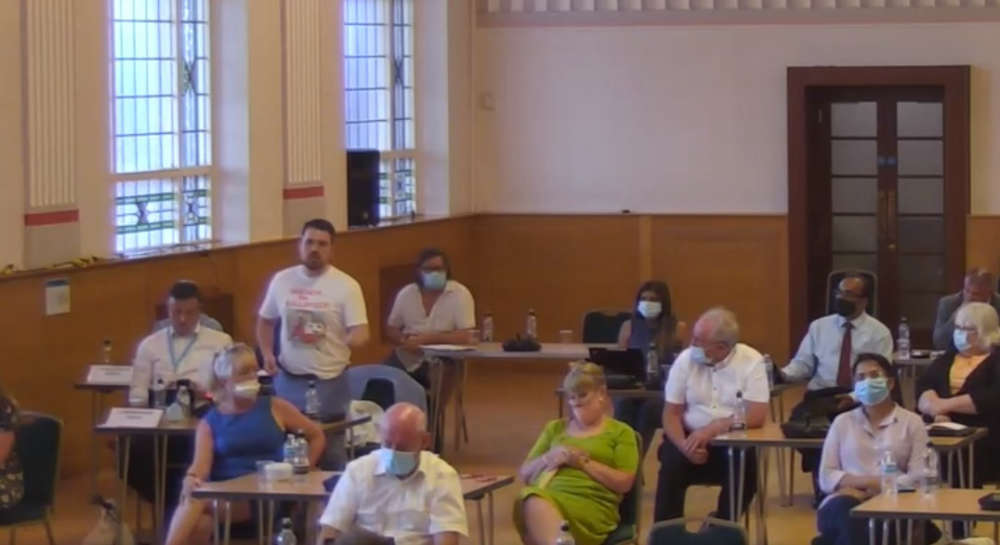 A Tory councillor stripped off in the council chamber to reveal a t-shirt bearing the words ‘Brenda the Bulldozer’ in a dig at Tameside’s council leader.

At a meeting of the full council on Tuesday night, Conservative Stalybridge South member Liam Billington unbuttoned his shirt to reveal the protest t-shirt.

Fellow Conservative councillor Phil Chadwick waved an identical shirt at councillors amid a row over the Godley Green development.

Their actions were condemned as ‘disgraceful’ by Labour cabinet members.

It came amid a discussion about the ‘Places for Everyone’ masterplan to build homes across nine of the Greater Manchester boroughs.

Bearing the words ‘Brenda the Bulldozer’ – in reference to council leader Brenda Warrington – the top features a bulldozer cartoon with blonde hair and a face.

The t-shirt has been designed by cartoonist Tony Husband, who is one of the members of the Save Tameside Greenbelt group opposing development on green spaces, specifically the Godley Green proposals.

Tameside council is aiming to create a new garden village of 2,350 homes on land at Godley Green, between Hyde and Hattersley, over a 20-year period.

Speaking as he removed his shirt to reveal the protest t-shirt underneath, Coun Billington said: “I’ve read the Places for Everyone document and it’s utterly humiliating for Tameside that makes depressing reading.

“We have seen councils make poor investment decisions which have led them to bankruptcy.

“If spades went in the ground now, the developments wouldn’t be expected to be completed past 2040.

“This would be a long term investment and would place the council at risk of land it can’t find developers for.

“I honestly don’t think casino style spending with taxpayers’ money is right when our constituents expect their money to be spent on frontline services.”

“I think this disgusting personalisation you’ve got on your shirt is really inappropriate,” he said, to applause from members.

“You’re elected representatives of the people of Tameside and that’s disgusting, it’s disgraceful and you should be ashamed of yourselves.

“Frankly we expect our Conservative opposition to just be disrespectful all the time. It really is water off a duck’s back as far as I’m concerned.”

“People might think it’s smart that you turn up with some flagship t-shirt on that says it’s very jovial, but it’s discourteous to the people of this borough,” he said.

“The plan that we’ve got here has been reduced by 8.3pc since Brenda came.

“The plan itself has never just been about housing, it’s about transport, it’s about job creation.

“If we don’t do this here now, someone else will do it. But they won’t be building a village, they’ll be building a large municipal area, houses and nothing else.”

Councillors voted to refer the Places for Everyone document to the Secretary of State and put it out for public consultation.