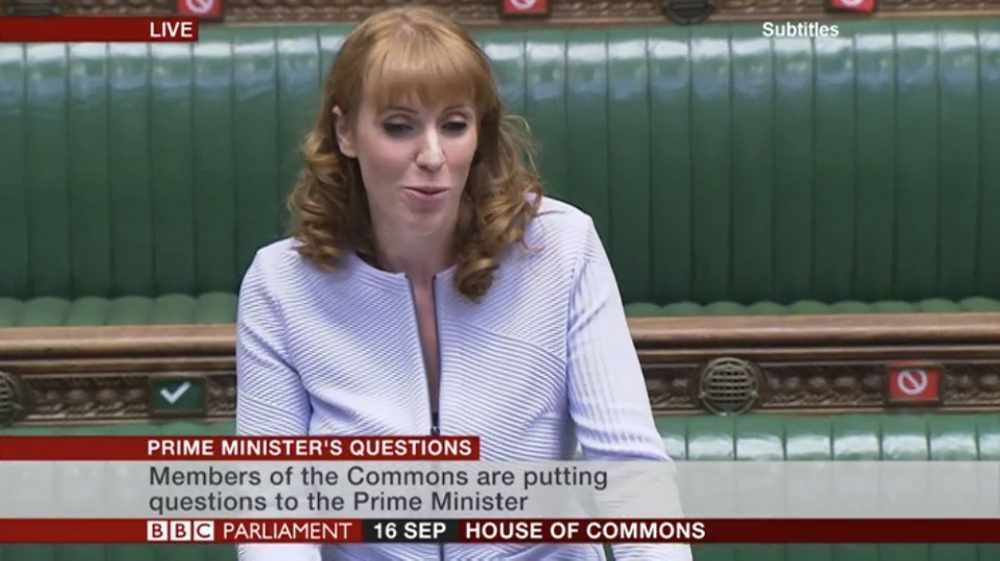 Angela Rayner put in an assured performance as she made history as the first-ever Tameside MP to take Prime Minister's Questions in the House of Commons.

The Ashton-under-Lyne MP, who is the deputy leader of the Labour party, presented a new challenger for Boris Johnson in the high-profile weekly event on Wednesday afternoon - seen as the set-piece of the Parliamentary week.

Mrs Rayner - who also represents the Droylsden and Failsworth areas - stood in at the despatch box for Labour leader Sir Keir Starmer, who tweeted that he was "pleased" and "relieved" that a coronavirus test result for one of his children came back negative on Wednesday morning.

Political commentators and members of the public have also reacted positively to her performance on social media.

Mrs Rayner, 40, a former care worker and trade union official who has been the Ashton-under-Lyne MP since 2015, was elected deputy leader of the Labour party in April having previously served in the shadow cabinet under Jeremy Corbyn's leadership.

It was an unusual PMQs session as usually both parties would send a deputy to stand in when one of the leaders is unable to appear. It is also thought that MP Rayner is the fourth woman to represent Labour at PMQs after Margaret Beckett, Harriet Harman and Emily Thornberry - with none of them doing so as the elected party leader.

A message from a man called 'Keir'

She began her six questions by inevitably addressing the coronavirus testing problems being experienced across the country, reading out a message to the Prime Minister from a man called "Keir".

MP Rayner said "Keir" wasn't able to go to work and his children were unable to go to school as they had to wait for coronavirus test results - despite the Prime Minister's promise of results within 24 hours.

"Keir was able to do the right thing and self-isolate and work from home, but other people aren't in this position," she said, adding that this includes care workers.

Whilst noting that the Prime Minister once earned £2,300 per hour, she asked if he knows how much a care worker in this country actually gets paid per hour.

I asked the Prime Minister how much a care worker earns. He couldn't answer me.

He once earnt £2,300 an hour and was happy to clap our care workers for a photo opportunity. Out of touch. #PMQs

In response, Mr Johnson questioned why Sir Keir wasn't present in the House of Commons after now being out of isolation following his child's negative result.

He added that 89 per cent of those who have tests have been getting results the next day and reiterated that the government is working "very fast" to turn around tests.

Mr Johnson also said that the UK's testing record compares "extremely well" with other European countries and the government will also be launching a care home winter action plan.

He also said that he is "proud" that his government has introduced the national living wage, which means care workers are paid "substantially more".

Boris Johnson says he is "proud this government has instituted the national living wage"#PMQS https://t.co/SpraU8oMMu pic.twitter.com/7Gmnd4FgE5

'When will the social care crisis be fixed?'

MP Rayner went on to say that the Prime Minister "doesn't know how much a care worker earns" and blasted it as "shameful" that the average wage is £8 an hour.

She pointed out that Mr Johnson promised on his first day in office to fix problems in social care and asked him to commit to additional funding to get the social care sector through the upcoming "winter crisis".

Labour's Angela Rayner asks Boris Johnson if he will commit funding for the social care sector in "looming winter crisis"?

The PM says: "We are concerned about the rates of infections in care homes... we want to make sure we protect [them]"#PMQS https://t.co/SpraU8oMMu pic.twitter.com/61JKphxIJA

In response, the Prime Minister said that a winter care home action plan is being announced tomorrow (Thursday) and there will be a "toughening up" of rules regarding the movement of care workers from one care home to another.

He also paid tribute to care workers for their efforts throughout the coronavirus pandemic, promising they will get the Personal Protective Equipment (PPE), guidance and cash that they need.

'Do all care homes have weekly Covid-19 tests?'

In her third question, Mrs Rayner bluntly asked the Prime Minister "do all care homes have weekly tests, yes or no?"

He responded: "Yes, to the best of my knowledge, care homes in this country should get weekly tests for all staff members and tests every 28 days for residents in care homes."

He added that Mrs Rayner was "right" to "express the frustration of people across this country about the massive demand there is now for tests".

The Prime Minister said that there has been a "colossal spike" in the number of people requesting tests. 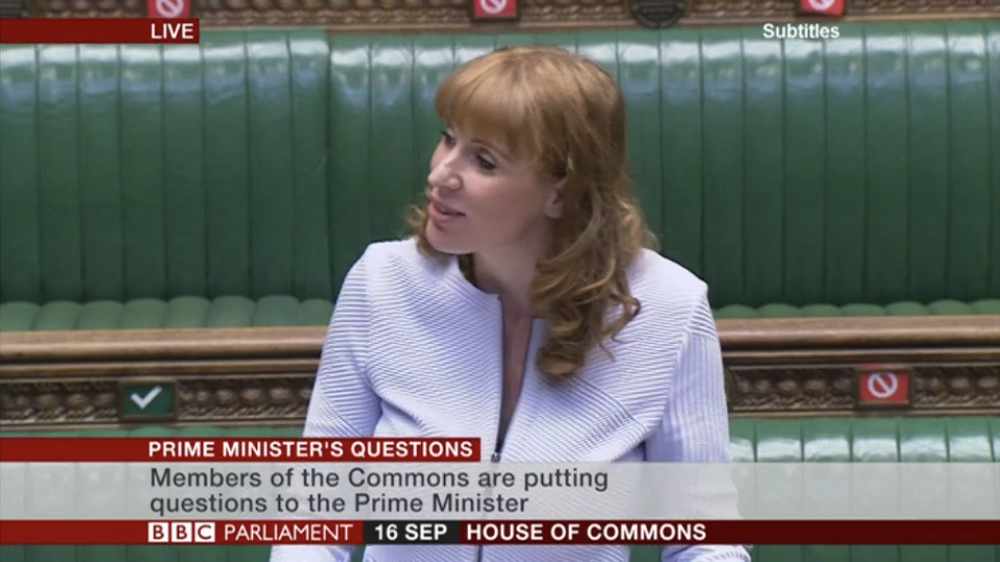 Angela Rayner taking PMQs in the House of Commons

'When will testing problems be fixed?'

Her fourth question centred around when the Covid-19 testing problems will be fixed - after a host of problems accessing them across the country.

She read out a comment from the Care England chief executive, who stated that the promise of weekly testing for staff hasn't been delivered.

Mrs Rayner added that the Prime Minister “makes and breaks promises“, citing the vow that all tests would be turned around in 24 hours by the end of June as an example.

“Time and time again he makes promises and then breaks promises”

She also referenced Health Secretary Matt Hancock who said in the Commons on Tuesday that the lack of available tests for some will take weeks to solve, saying "we don't have weeks" and the average number of tests being conducted a day is just 62,000.

Mr Johnson claimed in response that the government has delivered "the most thorough testing regime anywhere in Europe" and that tests have increased from 210,000 last week to up to 240,000 a day this week.

He also read out a list of countries, saying that the UK is testing more people and urging people to only get a test when they have developed symptoms.

A dig at Dominic Cummings

Mrs Rayner aimed a jibe at the Prime Minister's chief adviser Dominic Cummings, saying that the "next time a man with COVID-19 symptoms drives from London to Durham will probably be for the nearest Covid-19 test". Mr Cummings said he acted reasonably and legally after driving 260 miles from his home to Durham during lockdown.

She then went on to “the very serious issue” of maternity wards and new guidance, which she says means that many birth partners are not able to attend births.

The Labour deputy leader said that it is leaving women "enduring difficult labours, or even worse, traumatic and devastating miscarriages alone without support".

She asked directly: "Will the PM agree to meet with me.. and work with us to ensure no woman is forced to give birth without the support that they need?"

"I totally agree that birth partners should be able to attend the birth," says Boris Johnson#PMQS https://t.co/SpraU8oMMu pic.twitter.com/aP7N7OB02c

In his reply, Mr Johnson said that he "totally agrees" that birth partners should be able to attend births and is "very happy" to encourage cooperation between Mrs Rayner and health ministers.

"I perfectly understand the point she's trying to make and she's entirely right", he added.

Mrs Rayner said that she will take the Prime Minister's answer as a "yes" and thanked him for it.

In her final question, she accused the Prime Minister of "keep trying to blame other people for his own incompetence" for rising infections and the collapsing testing system.

Mrs Rayner added that the UK is "staring down the barrel of a second wave with no plan for the looming crisis" and asked if the Covid war cabinet's top priority last weekend was restoring grouse shooting. One of the exemptions to the new rule of six for social gatherings introduced by the government this week meant that up to 30 people can go shooting.

Mr Johnson then accused Labour of "carping from the sidelines" and focusing on "tangental" issues or "scare stories." He said that he's "getting on with delivering on the priorities of the British people" - strengthening the UK union, toughening sentencing laws and building more homes.