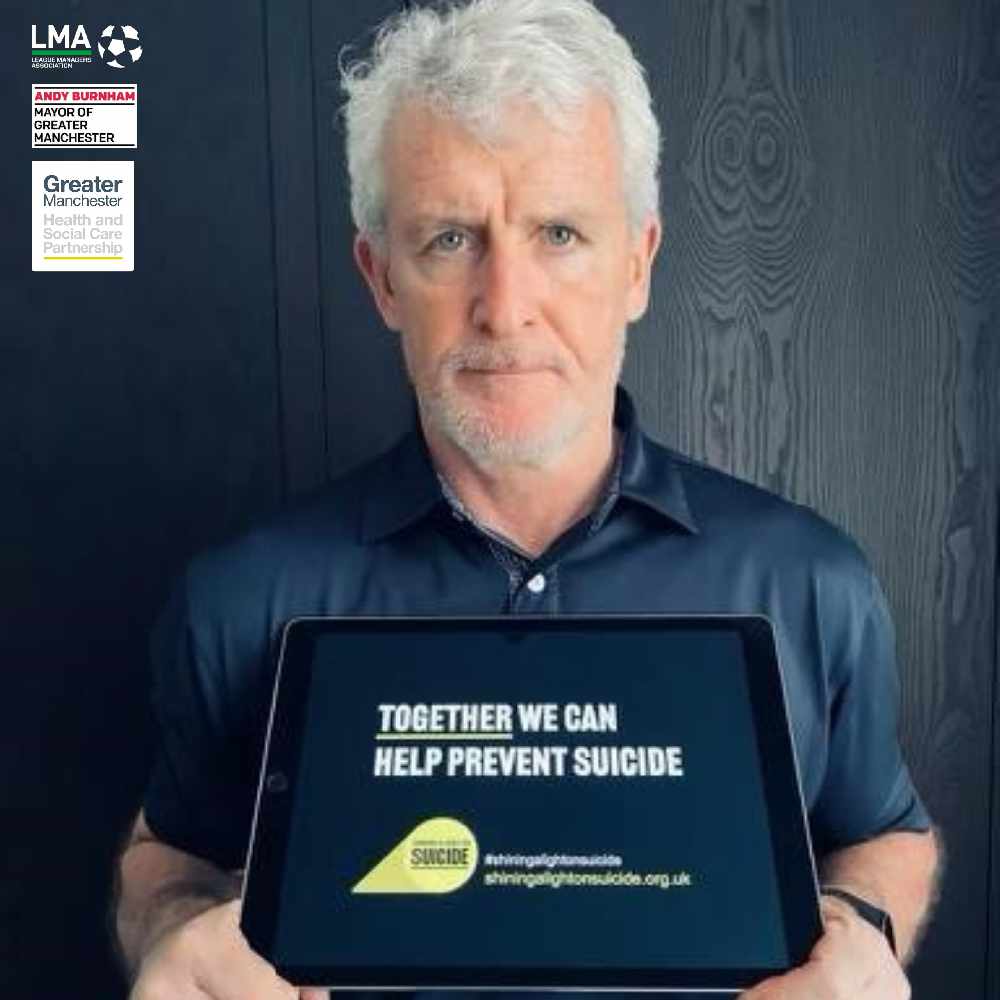 Greater Manchester mayor Andy Burnham is teaming up with two local footballing legends to raise awareness of suicide and help prevent more people from ending their own lives.

Members of the representative body for professional football managers in England will be given the platform to highlight the role that everyone can play in suicide prevention.

Suicide is the biggest killer of men under 49 and women aged 20 to 34. Every year more than 200 people in Greater Manchester die by suicide, and each death can affect up to 135 people.

The partnership will be backing the regional Shining a Light on Suicide campaign which aims to encourage people to open up and have more honest conversations about suicide and suicidal thoughts.

While many campaigns encourage openness around mental health there is often little or no direct mention of the word ‘suicide’, and research has shown that using it can help others share their feelings.

Andy Burnham described Shining a Light on Suicide as a ‘much-needed’ campaign during a ‘dark and difficult’ period caused by the Covid-19 pandemic.

And with the backing of the LMA and high-profile former players and managers, the mayor believes it could be a ‘game-changer’ in the national conversation around suicide.

He said: “Just having a little bit of knowledge about suicide, and the confidence to speak about it in the right way, can help to save a life.

“Football managers have got so much to offer to this much-needed campaign and I am deeply grateful to them for having the courage to take it on.

“They are often great communicators; experts in reading what people are thinking and finding a way of getting through to them.

“They are no strangers to high-pressure environments and coping with the ups and downs of life.”

The campaign is being delivered by the Greater Manchester Health and Social Care Partnership, and LMA members will be offered ‘suicide awareness’ training through a 20-minute course which will also be free and open to the public.

Sir Alex Ferguson, who serves as an LMA board member, said the ‘vital’ project could become a flagship for other campaigns across the UK.

He added: “The more we talk about suicide, the easier it is to ask someone if they’re having suicidal thoughts. Talking really could help to save a life.”

Mark Hughes said he was ‘honoured’ to be supporting Shining a Light on Suicide’s launch given his strong connections to both sides of Manchester’s footballing divide.

While suicide is not an easy subject to talk about, the Welshman stressed the importance of being direct with someone of concern.

“You don’t have to be a healthcare professional to help or even be close to the person, you just need to listen,” he added.

“Together we can all work to encourage openness and honesty, which will ultimately empower everyone to play a part in preventing suicide.”

To find out more about Shining a Light and the 20-minute training course, visit www.shiningalightonsuicide.org.uk.

Visit the website to learn more and take the free Zero Suicide Alliance 20-minute training to learn how to save a life.

If you have bereaved or affected by suicide support is available at www.Greater-Manchester-Bereavement-Service.org.uk