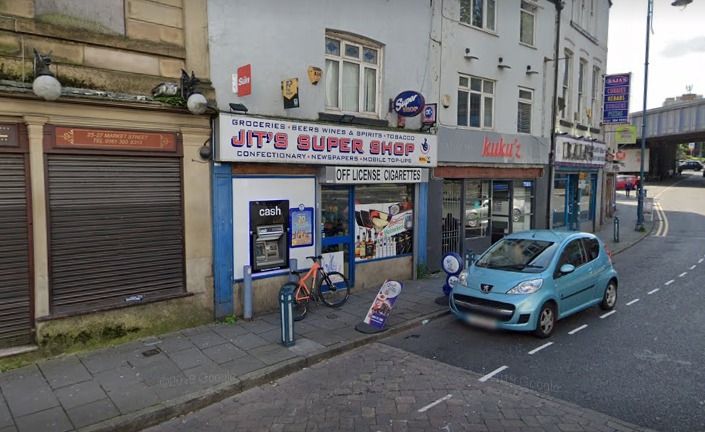 A Stalybridge shop which sold alcohol and 'cigarettes for 50p each' to underage schoolchildren has had its licence suspended.

Members of Tameside’s licensing panel along with police and council chiefs held a review into the licence of Jit's Super Shop on Monday (January 11).

The committee was told that several incidents of underage sales had been reported at the off licence on Market Street since 2018.

Previous conditions had been imposed on the shop in 2019 which required 24/7 CCTV to be in operation and Challenge 25 procedures to be in place.

However in June last year, PC Antony Lawton saw four youngsters leaving the shop carrying a plastic bag and when questioned, found them to be carrying alcohol which they said they had bought from Jits.

PC Lawton returned the alcohol to the shop and refunded the pupils, and trading standards were informed.

On October 19, a CCTV operative from Tameside council saw an ‘underage youth’ enter the shop and leave with single cigarettes.

Together these incidents were the final straw that led chiefs to review its licence.

Two schools, Copley Academy and West Hill School, had written in support of the licensing review, saying their pupils had been buying cigarettes and alcohol from the store.

In a statement which was read out during the hearing, assistant principal at Copley Academy, Dan O’Brien said there were concerns as cigarettes which had been bought at the shop had been ‘resold within the wider school community’.

“This poses a serious risk to the health of those young people and the academy wished to protect them from future harm,” he stated.

A parent had also urged bosses to tackle the shop after their 13-year-old son, a pupil at West Hill School, and some of his friends purchased individual cigarettes from the shop for ‘50 pence’.

Their statement, which was also presented to councillors, said: “I am very upset by my son’s actions and we have spoken at length about the consequences.

“However I want to be assured that action will be taken against the shop as they are adults and in control of a business and have taken advantage of my son and his friends.”

Councillors were told by public health consultant James Mallion that the borough is the sixth highest in the country for its smoking death rates.

The Stalybridge postcode where the shop is located also has issues with alcohol according to local health data.

“It tells us that this area has some of the highest levels of existing alcohol-related harm in the borough,” Mr Mallion told the meeting.

“The rank for weekend A&E attendances is the second highest in the borough, and that’s more than double the Tameside average which indicates a high degree of disruption and harm there.”

The premises licence holder and owner of the shop, Jelten Panchani, said he had had issues with staff but where underage sales had taken place these workers had been dismissed.

He also said that he had had problems with adults coming into the shop and buying alcohol and cigarettes for underage young people.

In a statement read by his legal representative, Rebecca Penfold, he said: “it has always been a problem from the start of my ownership that children would come into the store and try and purchase cigarettes and alcohol.

“I advised my staff to usher children away from the store if they were standing outside to prevent any sale ot underage children.

“I understood at the time that my CCTV system needed to be updated but did not know I had to train my staff to know how to use the system.”

He also said he had never stocked or sold fireworks from his shop, and children’s claims that they had bought them from Jits were fabricated.

Mr Panchani added that when children congregate outside his shop he now instructs his staff to ring 101 to prevent staff being ‘intimidated’ into selling alcohol or cigarettes.

“To be honest there is no excuse for this,” he told the hearing. “Things that have happened in the past are not acceptable.

“I understand the licensing objectives, and because of how much the shop means to me personally I’ve done everything possible to put new things in place.”

However because of the previous history of issues at the premises, the licensing panel ruled that the alcohol licence should suspended for two months.

They also ruled that there should be a limit of no more than two customers aged under the age of 18 in the shop at any point in time.

And a personal licence holder must be present on the premises at any time alcohol is sold.

Councillor David Sweeton, the committee chair said it was a ‘final opportunity’ for the owner.

“This will enable the licence holder time to properly put in place the new measures that he himself has identified,” he added.

“Any future issues may lead to the licence being revoked.

“We have decided that with the right approach and the right measures in place and the seriousness of these instances realised by the premises holder, we expect this premises to never come onto our radar again.”

The licence holder now has the opportunity to appeal the committee’s decision within 21 days of a written decision.