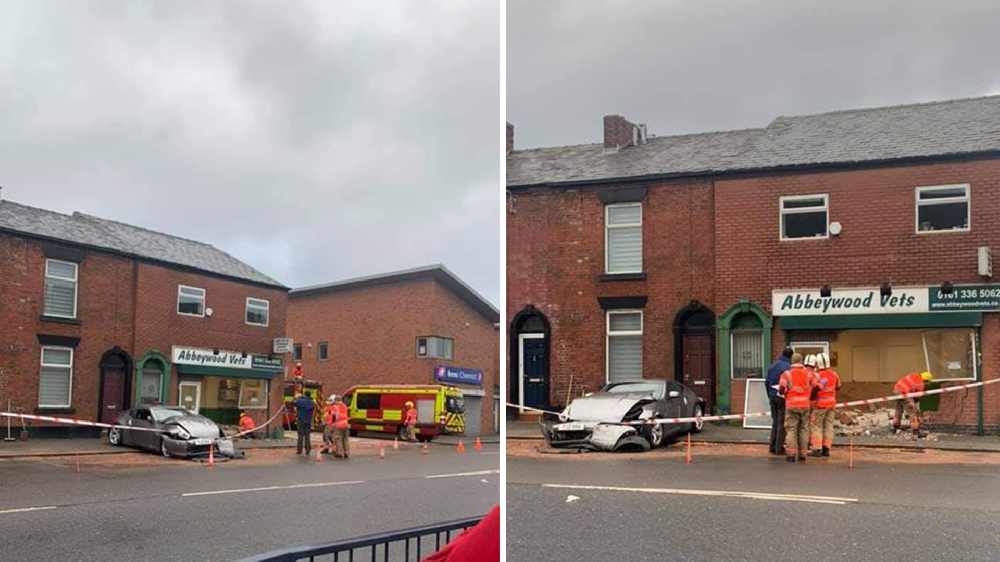 A sports car crashed into a veterinary surgery opposite Crownpoint Shopping Park in Denton last weekend.

Emergency services rushed to Ashton Road at around 1pm on Saturday afternoon (23 January) to reports that a vehicle, understood to be a Nissan 350z, had smashed through the front of Abbeywood Vets.

A GMFRS spokesperson said: “At around 1.00pm on Saturday, 23 January, firefighters were called to reports of a road traffic collision on Ashton Road, in Denton.

“One fire engine from Ashton-under-Lyne fire station, alongside the Technical Response Unit from Leigh fire station, quickly attended the scene. The collision involved one car which had collided with a building.

“Firefighters made the scene safe using specialist equipment and were in attendance for around two hours.”

These images show the damage to both the vehicle and the surgery, with the area taped off as fire crews assessed the scene.

Greater Manchester Police say nobody has been arrested.

A spokesperson said: "Officers were called around 12.40pm on Saturday 23 January 2021 to a report that a car had collided with a building on Ashton Road, Denton. No arrests were made."

It is understood that the driver of the vehicle remained at the scene.